As everyone is racing to start their resolutions, I’m not ready to let go of the December holidays. One of my favorite seasonal movies to watch is Charles Dickens’ A Christmas Carol in all of its many adaptations. Some movies stick close to the classic novel, while others turned the story into a musical, a cartoon, a comedy with Bill Murray and there even is an adorable Muppet version. I love them all! Charles Dickens wrote A Christmas Carol in 1843 and almost 175 years later, the story keeps reaching new audiences.

Why is this story so popular?

There are two main reasons why I love A Christmas Carol. First, there is the lesson that it’s never too late for someone to change for the better. Scrooge was a miserable old man who makes a drastic positive change which in turn improves the lives of the people around him. This character arc resonates stronger with me with each passing year. Second, the story reminds people about the charitable spirit of Christmas and helping the Tiny Tims of the World, rather than the amount of presents under the Christmas tree.

Which version did I enjoy the best? Drum roll please…. All the movies!

My favorite moment is when a movie will add a new scene between Scrooge and Tiny Tim. People want to see Scrooge interact with the boy whom he has the power to improve (and perhaps save) his life. It’s heartwarming. Even two movie versions highlight this interaction on their posters.

However, the movies have the benefit of over a century of audience testing for the best results while Charles wrote the entire book in just six weeks. There is no final scene between Scrooge and Tiny Tim in the book, only the reference that “…and to Tiny Tim, who did NOT die, he was a second father”. If the author had more time to reflect upon his story or for his allies to provide him with story feedback, I truly believe he would have written that pivotal scene.

Still it’s every author’s dream to have a story surpass them. The character name Scrooge and the sentiment of "Bah! Humbug!" are now universal terms recognized by many generations.

People can’t get enough of this story and instead of producing another version of A Christmas Carol, they just released a movie about Charles Dickens’ life called The Man Who Invented Christmas starring Dan Stevens and Christopher Plummer. It’s a great movie for people who want a glimpse into the six week writing experience to produce A Christmas Carol and for storyline insights like the importance of helping children in labor houses.

As an added Christmas Carol bonus, my follow Night Owl Review Columnist, C. Morgan Kennedy, who produces the monthly The Melting Pot hosted the best holiday gathering. There was a local high tea establishment that celebrated the holidays with a sold-out Charles Dickens themed High Tea. Patrons got to experience holiday food of Dickens’ time period while I got to share my love for this story with my friends.

This story is so beloved that I would bet it will be just as popular in another 175 years.

In honor of Valentine’s Day, next month I will be reviewing a romance. Do you have any suggestions for me? 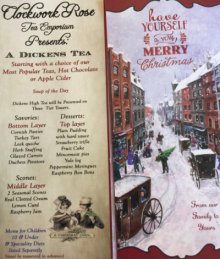