Today Paige Tyler has stopped on over to share some sexy wolf shifter with us. This is the first in a new series for her. Take a taste via an excerpt and enter to win a print copy. USA only. 18 or over to enter.

Wolf Under Fire is a story about Jestina Ridley and Jake Huang, covert agents for the Special Threat Assessment Team (STAT). It’s their job to go after all the horrible things that go bump in the night. The only problem? Jestina recently watched what she believes is a werewolf kill two of her long-time teammates, and you guessed it, Jake is a werewolf. How could this possibly work out?

This is the pivotal scene where Jake starts realizing he’s going to have a harder time staying away from his new teammate than he ever would have imagined.

Before Jake knew it, two hours had passed and the sun was coming up. Forrest and Harley offered to help clean up, but Jake waved them off. It was obvious Forrest wanted to check on Misty, and Harley still looked a little tired, despite getting a few hours’ sleep when they’d gotten back last night. Jake was ready to fall into bed, too, but no way was he leaving the dishes for Jes.

Even though he’d already accepted the house was going to smell like her while they were staying there, the scent of jasmine and fresh laundry enveloped him as she went up on tiptoe to reach over his shoulder and put a glass in an upper cabinet. It was all he could do not to groan in appreciation.

As if sensing the effect she had on him, Jes paused only inches away, her gaze meeting his. If either of them leaned in a little closer, they’d be kissing.

He took a step back, clearing his throat. “Thanks for the sandwiches. And for coming up to the third floor when I got into trouble at Darby’s place.”

Jes stood there silently, gazing up at him for the longest time. Part of him wondered if a woman like her could ever kiss a werewolf.

Shoving her hands in the pockets of her long cardigan, she backed away, then turned and headed for the door without a word. Just before slipping out of the kitchen, she stopped and looked back at him, her brown eyes warmer than he’d ever seen them.

“Thanks for catching me when I let go of the railing,” she murmured. “That was a long fall.”

Then she disappeared, heading down the hallway and upstairs before Jake could tell her it wasn’t a big deal. That anyone would have done the same. But then he remembered what Jes felt like in his arms when he’d caught her. She was firm in all the right places and soft and curvy in others.

Maybe it was a bigger deal than he’d realized.

For the cases no one else can solve, they send in the Special Threat Assessment Team

Supernatural creatures are no longer keeping their existence secret from humans, causing panic around the globe. To investigate, monitor, and—when necessary—take down dangerous supernatural offenders, an international task force was established: The Special Threat Assessment Team.

STAT agent Jestina Ridley is in London with her team investigating a suspicious kidnapping. Over her radio, Jes hears her teammates being savagely attacked. She runs to help, but she's too late. The only survivor, Jes calls for backup and gets former Navy SEAL and alpha werewolf Jake Huang and his new pack. Convinced that the creature who butchered her teammates was a werewolf, Jes doesn't trust them. But if they're going to uncover the facts and make it back home alive, she'll need Jake's help. And with everything on the line, Jes will have to accept Jake for who he is, or lose the partner she never expected to find...

1. Do you prefer series or stand alone books?

2. What has you wanting to read Wolf Under Fire after reading the excerpt?

This giveaway is over. The lucky winner is: Linda Moffitt 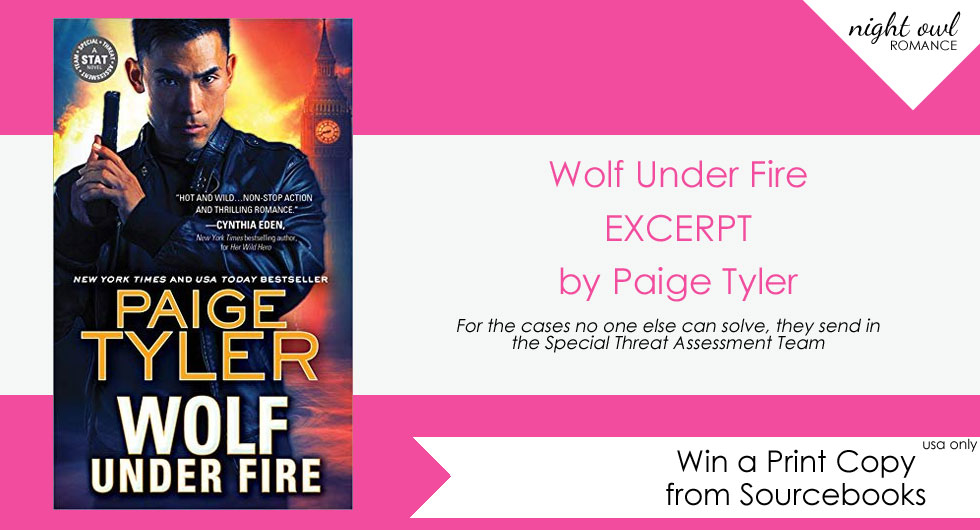