Tammie here along with prolific historical romance author Linda Broday. Linda's going to share some really important advice for those wanting to write historical romance novels. Plus this is great information for you readers as well. Plus don't miss out on the book giveaway from Linda's publisher Sourcebooks Casablanca. You could win a copy of Linda's book, The Mail Order Bride's Secret.

I’ve been writing historical western romance novels and short stories for over twenty years and will publish my twenty-seventh on January 28. This sub-genre calls for specific things that no other has but I had to really think about what sets this type of fiction apart. Here are three tips that come to mind:

1. Sound Authentic – This time period has its own vocabulary and a great many people in the 1800s Old West were uneducated so their language was simple and to the point. If they used flowery words it was usually when they were trying to impress someone and often misused words which could lead to some hilarious scenes. They used a lot of sentence fragments and never proper English. For instance, no one would ever use the word “whom” unless it was an Easterner visiting the west. The cowboys used colorful phrases a lot to get his point across such as: always between hay and grass when talking about someone’s financial state meaning they either had a lot or nothing. No in-between.

2. Do Your Research – It’s important to get your facts straight whether it’s something historical or a certain place/state. Nothing will kill a story faster for readers than when they run across an incorrect date, fact, historical person, etc. And believe me they know. That goes for the method of transportation—horse, wagon, stagecoach, train, etc. You must get this right and know how far and fast each can travel in an hour, day, or week. Everything moved slowly. Another thing before you begin to write, go visit the place where you want to set a story and be aware of the long distances between towns. A lot of people don’t understand how large Texas is. I’ve had people visiting Houston or Galveston and ask why I can’t meet them for lunch. It’s a ten hour drive from where I am in the Texas Panhandle to Houston.

This vast area allowed outlaws and all sorts of criminals to thrive. Lawmen were few and far between in the far reaches. A writer of historical westerns has to know how much law existed in their setting.

Get the Kind of Clothing Correct – Nothing was more different than how Easterner’s dress was from practical hardworking men and women on the frontier trying to carve out a life. Except in certain instances, the dress was simple. No hoop skirts for women. Hats were a must due to the hot sun and little shade in a lot of areas. Cowboys wore spurs and chaps. Shoes were sturdy and able to hold up to walking over rocks and uneven ground. In fact, men and women both wore boots. However, don’t get me wrong, the communities did have dances, box suppers, and socials where they put on their Sunday best and engaged in occasional fun.

3. Different Customs – Customs were different in the west. As people moved across the land, customs and rituals changed, becoming more relaxed. Marriage ceremonies were less formal. Courting rituals had fewer rules and were dictated more by families than society unlike their Eastern counterpart. Women in the west tended to court and marry later due to the low numbers.

I hope I’ve given you some things to think about. Mainly, westerns require a different mindset and a lot of study. You have to know how a cowboy thinks and acts. They consider themselves caretakers of the land and are very loyal to the brand for which they ride. No one is kinder or more respectful. Getting westerns right is hard work, but I can’t imagine writing anything else.

"Linda Broday's heroes step right out of her books and into your heart." ?Jodi Thomas, New York Times bestselling author

When the West was wild and man's law favored the few, these extraordinary women could be found...in the heart of an outlaw.

When three young children show up on outlaw Tait Trinity's doorstep, he knows he can't help them?a wanted man has no business raising kids. And yet he can't bring himself to turn them away. At a loss, he sends for the mail order bride he'd been writing to, hoping the demure dressmaker will be the answer to his prayers.

Melanie Dunbar is nothing like the bride Tait was expecting. She's rough and tumble...and hiding an ulterior motive. Dangerous men have taken her sister hostage, and if Melanie wants to see her alive, she'll have to betray her new husband. There's only one problem?the more time she spends with Tait, the more she comes to care for him. Yet as the noose begins to tighten, Melanie will have to make a terrible choice: save her sister...or the man she loves.

At a young age, Linda Broday discovered a love for storytelling, history, and anything pertaining to the Old West. After years of writing romance, it’s still tall rugged cowboys that spark her imagination. A New York Times and USA Today bestselling author, Linda has won many awards, including the prestigious National Readers’ Choice Award and the Texas Gold. She resides in the Texas Panhandle where she’s inspired every day. 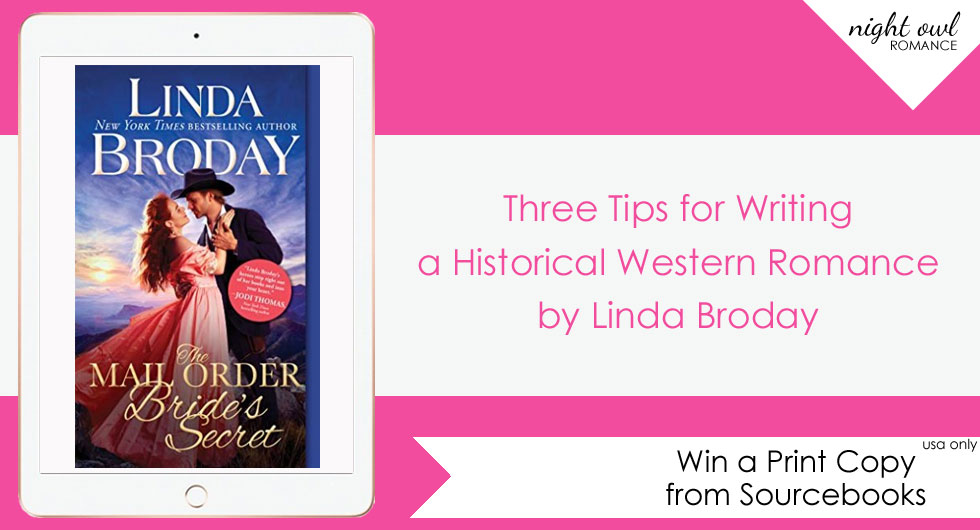