Bianca D'Arc releases the second in her Redstone Clan series. 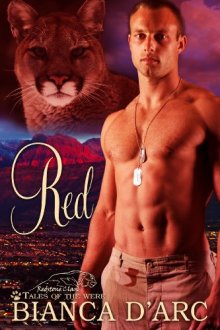 A water nymph and a werecougar meet in a bar fight… No joke.

Steve Redstone agrees to keep an eye on his friend's little sister while she's partying in Las Vegas. He's happy to do the favor for an old Army buddy. What he doesn't expect is the wild woman who heats his blood and attracts too much attention from Others in the area.

Steve ends up defending her honor, breaking his cover and seducing the woman all within hours of meeting her, but he's helpless to resist her. She is his mate and that startling fact is going to open up a whole can of worms with her, her brother and the rest of the Redstone Clan.

Trisha’s had to hide her special abilities most of her life, but with her brother’s Army buddy – the guy they call Red – she’s finally free to be herself. He calls to her in a way she’s never experienced before and while bad guys keep trying to abduct her, he’s her safe port in the storm. But can such dangerous beginnings lead to a life-long love?

First in the Series:

Tales of the Were: Magnus - Redstone Clan #3

Magnus Redstone is the middle of five brothers. As a result, he's always had a little bit of a hard time forging his own identity. While he excels at martial arts, he didn't want to be a soldier like Grif and Steve, his two older brothers. He also doesn't have time for practical jokes like the younger two, Bob and Matt. No, Mag is probably the most serious of the brothers and he always has been. The only real moment when he threw caution to the wind was when he met one very special lady. A lady with fangs...

A life-long martial arts enthusiast, Bianca enjoys a number of hobbies and interests that keep her busy and entertained such as playing the guitar, shopping, painting, shopping, skiing, shopping, road trips, and did we say… um… shopping? A bargain hunter through and through, Bianca loves the thrill of the hunt for that excellent price on quality items, though she’s hardly a fashionista. She likes nothing better than curling up by the fire with a good book, or better yet, by the computer, writing a good book.