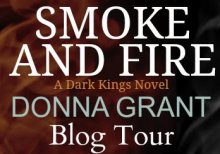 Welcome to the SMOKE AND FIRE Blog Tour!

To celebrate the release of SMOKE AND FIRE and the season of Spring, there is also a DRAGON EGG HUNT going on throughout the tour! Exciting, right? Certain stops throughout the tour will have something special to share with you which will provide you with an extra entry for the giveaway. Just like a traditional egg hunt, you're going to have to search for these items/information!! Find out more information about the Dragon Egg Hunt in the contest section of the post!

Thank you for helping me celebrate my latest release SMOKE AND FIRE. We live in a world with technology and gadgets are basically everywhere and at our fingertips at any given moment. Ryder is not only King of the Grays, but he's also a computer mastermind. The Dragon Kings rely on him for all things technology. He's also very particular about his "toys" (i.e. gadgets) and who's allowed on them. This got me thinking about what my top 5 gadgets are....

1. Mac laptop - nothing beats a Mac. I have a Mac desktop and two Mac laptops!

2. iPhone - who can live without their phones. I'm such an Apple girl that I have everything Apple.

3. Wembley wood earbuds - not only do they have clever gold accents, but they also do a great job of

cancelling noise while using them.

4. iPad - what's there to say? It's another fabulous Apple product that I love

5. Boogie Board Sync - great for when I'm writing and need to jot something down that then goes straight into a document on my computer

She wanted to touch him. There had always been something about being in his arms that made her feel as if she could tackle anything and the world wouldn’t dare get in her way…

A dragon shapeshifter and a computer mastermind, Ryder is sent to guard Glasgow after a devastating Dark attack. But when memories of an explosive affair come back to him?in the flesh?Ryder cannot help but want to protect the woman who haunts his dreams. Even if means shifting into the dragon he was never supposed to reveal...

Kinsey could never get enough of Ryder. His every touch only left her wanting more. But now that she’s seen him in his true form, Kinsey’s world is rocked to the core. She knows that to stay?and feel?alive, she must be with Ryder. But is Kinsey’s passion worth the risk of danger that comes with being a part of Ryder’s dark and fierce world?

We mentioned earlier in the post that there is a DRAGON EGG HUNT going on throughout the tour. There are 9 "Dragon Eggs" (i.e. Blog Tour Stops) throughout the blog tour. Each representing one of the books in the series! The fun part is that, like a regular egg hunt, you'll have to find these special stops and then FIND the "Dragon Egg". The "Dragon Egg" is actually information within the site. Yup, site. ;) You'll have to visit each tour host, each day to see if they have a Dragon Egg for you to find. The Rafflecopter widget will provide you with the hint. The hint will be a questions or it will ask you for specific information. The DRAGON EGG HUNT is a fun and interactive activity that will provide you, the reader with some insightful information about the series!