The best panel I attended at the 2018 San Diego Comic Con was for the paranormal romance TV series Discovery of Witches (author Deborah Harkness' book series - coming to TV - Sundance Channel). That was because of the charm and chemistry of the cast and crew warmed the entire audience. They all could be fabulous actors giving the performance of their lives but they came across as if they would hang out together even if they weren’t working together on this TV show. As it stands, they all enjoy hanging out in the fabulous sets built for the book series.

River Song of Dr. Who is one of my favorite characters but I had no idea that the actress who played her, Alex Kingston, is hilarious.

The Most Important Paranormal Book!

This paranormal romance book has been in my to-be-read pile since it was published in 2011 but I promise you that I wasn’t the only one trying to get internet access at the convention center to start downloading this book. And this is quite a time commitment. I’m currently on disc 8 of disc 20 of the audiobook version. So far, I have no trouble imagining the very sexy Matthew Goode as the immorally sexy Matthew Clairmont.

The big excitement at the panel was the announcement that the Sundance Channel has acquired the US airing rights so we will be able to eventually see this show. When I’m able to watch the television series and finish the book series, I will post a review to my monthly Night Owl Review column called Apples vs Oranges (insert link).

In the meantime, if you enjoy a fantasy story with witches, here are some of my favorite paranormal stories with witches:

Harry Potter series by JK Rowling: I would have to turn in my Hufflepuff house membership if I didn’t suggest the best paranormal fantasy young adult series in the world. If you are a muggle who has not read this series yet, leviosa this book to the top of your reading pile.

Charlaine Harris’ Sookie Stackhouse or the Midnight Texas series: This paranormal romance author hooked me in the first chapter of her Sookie Stackhouse novel so I'm hooked and I will continue to read all of her paranormal books. Since her stories have witch characters, I can recommend both novel series, which are also successful paranormal TV series.

Shadowhunter series / The Immortal Instruments by Cassandra Clare: You will really enjoy the series that was the top promoted paranormal novel series at this year’s Comic Con. There were posters, denim tote bags and stuffed dolls to attract new paranormal readers.

My friends shared their favorite paranormal romance witch stories for your to-be-read pile:

Romance Book Blogger Jessie lives in Oregon and writes to avoid the rain. She only feels compelled to kill her characters when she starts a new diet and if she hates the ending of a TV episode she’ll rewrite it to give everyone a happily ever after. Currently Jessie is an unpublished author but she works tirelessly to removed two letters – un – from that word. She also writes the Apples to Oranges monthly blog about novels that have made into movies or TV shows. 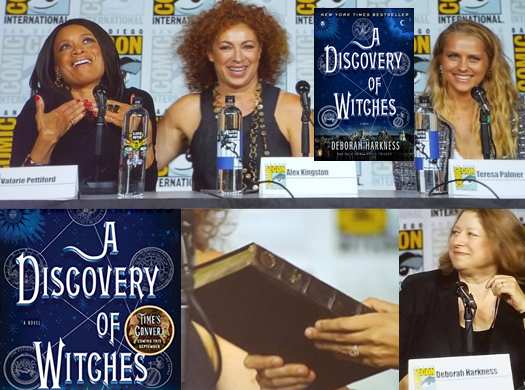