From Best friends to Lovers

If you want the truth, “Friends to Lovers” romance stories are my very favorite to write. I love the shared history, the hints at what might have been so many years ago, the secret crushes, the ALMOST moments, and best of all… wrestling with the RISKS.

That’s the thing about Friends to Lovers romance that sets it apart from the other tropes. These characters already have something that’s powerful and meaningful and most definitely, worth protecting. They recognize what’s at stake and usually aren’t too keen on risking it.

Sean & Molly have been best friends for more than a dozen years, and make up a key component of a bigger group. So it’s not just their relationship at risk when those pesky emotions start to rear their head. It’s a threat to everyone they love.

From JUST THIS ONCE…

That was Molly’s first coherent thought when she woke to the sound of the front door closing and Sean’s keys landing on the table as he walked into the apartment. The issue wasn’t that she’d been woken before she was ready—it was already after ten—or that she’d slept in her clothes, or even that she had no memory of anything past leaving Belfast the night before. No, it was Sean. And more specifically, the dream she’d had about him. And her. Together.

Which was very bad, because it had been years since she’d suffered anything more than the occasional stray below-the-buckle thought about the guy who was without question her best friend in the world and just happened to think of her as the little sister he’d never had.

No. The real trouble had been all the non-porny stuff that had been there too. The quiet moment before that dirty business in the shower. The way his hand lingered at the small of her back when they walked, the press of his kiss at the top of her head, how she’d felt when Sean was above her, his dark-brown eyes searching hers.

The thing of it was, those moments were already hers—only in this dream, every touch and look and whisper had been infused with that essential something her real-life interactions with Sean had always lacked. The dream had breathed new life into the ideas she’d finally managed to put down more than five years ago, and now she was stuck with this heart-pounding, butterfly-belly sensation as she caught her first glimpse of him.

Hovering at her bedroom doorway, she watched as he walked over to the sink. His T-shirt was damp with sweat and clung to his powerful back. Reaching over his shoulder, he grabbed a handful of the fabric and yanked it overhead in one swift motion.

He was standing there shirtless as he filled a glass with water from the tap, all those muscles flexing and bunching with every movement. Eyes closed, he turned around and leaned back into the counter as he drank. A bead of sweat trickled slowly down his neck, leaving a wet path that was making her mouth water in a way Sean wasn’t supposed to.

No way could she go back to the years she’d spent silently pining for him while he knuckle-rubbed her head and then brought every other damn girl on campus back to his room to bang. It had been grueling, and it had taken her years to get past. Years for her to get to a point where she didn’t feel like she was lying to him every time they hung out and dying inside every time they didn’t. She wouldn’t go back to that.

“You have to move out,” she croaked, her eyes still fixed on that rolling droplet as it ventured over the packed layers of his right pec.

Sean’s eyes opened. He set his glass down on the counter behind him. “Morning, Moll. I slept great. Thanks for asking. Even pushed my schedule back to after lunch so I could catch up a little extra and get a workout in.”

He wiped his face with the T-shirt he’d just whipped off, and a sinking feeling came over her. She knew what she’d be dreaming about tonight.

And she hoped he never did.

“We lived together for five years, and it was awesome. You always say you love it when I crash here. Hell, you try to talk me into it every other weekend. You want—no, need—a roommate who actually pays rent. So what’s the problem?”

She swallowed hard, trying to keep her eyes on his face. The problem was that glistening expanse of muscled chest and banded abs, shifting and flexing with his every movement. The problem was that fine trail of golden hair bisecting all of it and leading south into those too-low basketball shorts—red this time, and silky enough to hint at the contours beneath. The problem was the utterly untamed mess of dark-blond hair making her fingers itch with the need to touch it.

Pretty valid problems, to her mind anyway, but not exactly something she was ready to share with Sean. Not if she wanted to hang on to the most important relationship in her life. She needed to look away and come up with an answer quick.

“Molly?” he asked again, sounding uncommonly stern as he crossed his arms over his chest. Which was so not helping…because his arms and oh God, that crazy V thing happening with the muscles above his shorts when he—

“Uhh…Molly… What…uhh… Why are you looking at me like that?”

Sean & Molly hit the shelves today in Just This Once. If you love fun, sexy contemporary romances, I hope you’ll give them a try!

PS—While JUST THIS ONCE is Book 3 in the Wedding Date series, as with all my novels, it can most definitely be read as a stand alone :-)

Just this Once - The Wedding Date, #3

He can't have her.

What could possibly go wrong?

As heir to a chain of luxury hotels, Sean Wyse III always gets what he wants. So when he sees a freeloading roommate taking advantage of his spunky best friend, Molly Brandt, he doesn't hesitate to step in. He kicks out the roommate...and moves himself in.

Molly loves quality time with Sean, but spending nights with him one wall away threatens to wake the crush she thought she'd gotten over. A crush Sean knows nothing about, which might be a problem...considering how hard Sean's been working never to think of Molly that way.

Hard core romantic, stress baker, and housekeeper non-extraordinaire, Mira Lyn Kelly is the USA TODAY bestselling author of more than a dozen sizzly love stories with over a million readers worldwide. Growing up in the Chicago area, she earned her degree in Fine Arts from Loyola University and met the love of her life while studying abroad in Rome, Italy... only to discover he'd been living right around the corner from her back home. Having spent her twenties working and playing in the Windy City, she's now settled with her husband in rural Minnesota, where their four amazing children and two ridiculous dogs provide an excess of action and entertainment. When she isn't reading, writing, or running the kids around, she loves watching the Chicago Blackhawks and action/adventure movies, blabbing with the girls, and cooking with her husband and friends. 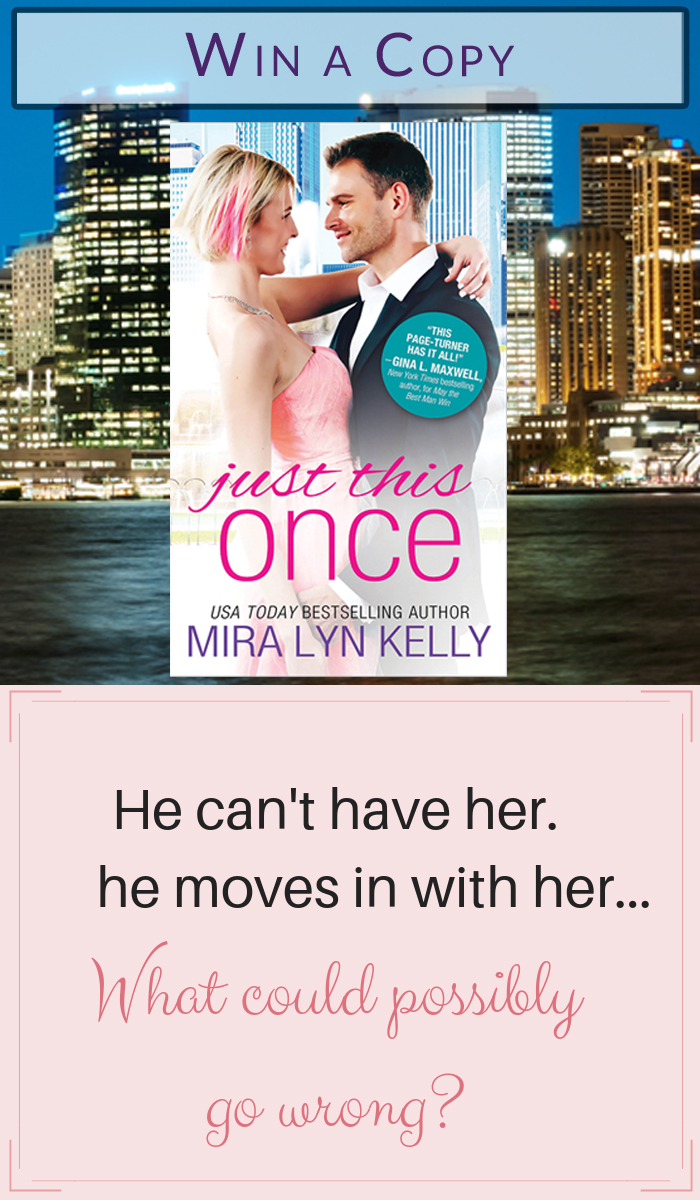