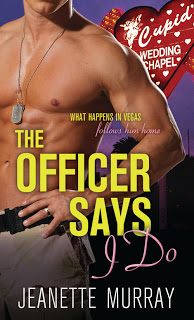 Enter to win a Print Copy of Officer Says "I Do"!

***
Baby, Let’s Get Married!
by Jeanette Murray / NOR Author Page

I’ve never been to Vegas. (Insert gasps here.) It’s true. Despite wanting to go, I’ve just never had the chance. But when my first Marine in the Semper Fi series was about to meet the love of his life, the idea of Vegas just wouldn’t leave. And when I knew he was going to make a wedding out of it, then there was just no question.

This would require copious amounts of alcohol on Tim’s part. But Skye would be stone cold sober. I did wonder though about the logistics of getting married in Vegas on the fly…and also drunk. Was it even possible? Probable?

Time for research. And since I don’t live in or anywhere near Las Vegas, my research required the phone. My first phone call occurred at 3am. I couldn’t sleep and realized hey…nobody in Vegas sleeps either. So I checked a few all-night chapels online, took a chance, and called one.

Chapel Lady: Can I help you?

Me: Can you get married drunk?

Me: Uh… *panic* I mean, if the guy was drunk. Could they still get married?

Chapel Lady: (another long pause) Is this a prank call?

Me: Sorry. (hangs up in shame)

Not off to a rousing start, was I? I also hate the phone and get very nervous. So that didn’t help. But I needed answers, and so I sucked it up, tossed back a shot (of hot chocolate) and tried again.

New Chapel Lady: Can I help you?

Me: If I came in there with a really drunk guy, would you still marry us?

Me: This is just hypothetical.

New Chapel Lady: You hypothetically want to get your fiancé drunk before you marry him? Or he hasn’t slept off his bachelor party yet?

Me: Uh…does it matter? He’s drunk.

New Chapel Lady: You could wait a few hours, see if he sobers up. We won’t be busy again until about noon.

New Chapel Lady: Honey, I think you’re asking the wrong questions. You might want to ask why your fiancé has to be drunk to marry you.

Strike two. This is why I write books instead of being a motivational speaker for a living. Talking and thinking on the fly? Not my strongest skill. Round three, coming up.

Latest Chapel Lady: Can I help you?

Me: I’m writing a novel, and I have questions. Can you help me?

Latest Chapel Lady: A writer?! How fun! Let’s hear it.

Me: My characters are getting married in Vegas. The groom is drunk though. Is this still possible?

Latest Chapel Lady: Sweetheart, the grooms that are most memorable here are the sober ones. Drunk is not uncommon. We require consciousness and ID. Need any more help?

Me: You are my new best friend.

From here, I was able to get the information I needed to figure out the technicalities of a real impromptu Vegas wedding. But getting there was quite the battle. Lesson learned: tell people I’m a writer first, then go into questions. Saves a lot of trouble later on.

I thought I might share with you the proposal that led up to the wedding of many research calls. Here’s Tim and Skye, the hero and heroine of The Officer Says “I Do,” debating the finer points of marrying someone you’ve recently met.

“Ever realize that you’ve been watching life instead of living it?” He looked at her, but his eyes weren’t seeing her. Skye would have guessed waving a hand in front of his face wouldn’t have fazed him. It was like he mentally left the building.

“Kind of a philosophical question for the first meeting, don’t you think?” she teased, hoping for a reaction.

He gave her a grin and she relaxed. “You’re right. Screw being philosophical.” Before she had a chance to say anything in response, he grabbed her wrist and tugged her around a corner. In the shadow of a potted palm tree, he gently nudged her back against a wall. “Just need to see,” he murmured and then his lips were on hers.

The bright casino lights, the buzz of voices, the clanging of bells and wailing of sirens all faded to nothing, as if they’d stepped in a bubble built for two.

Skye wasn’t one to lie to herself. She could play the outraged damsel, she could act the indignant uptight woman. But since she was neither, and because it was exactly what she wanted, she only wound her arms around Tim’s neck to bring him closer. To encourage.

Not that he needed the encouragement. The man was taking what he wanted whether she agreed or not. His tongue licked the seam of her lips and dove in without waiting for her to catch up.

He tasted like whisky, and he felt like velvet. Large hands circled her waist and pulled her against him. The outline of his erection was hot against her hip, and she felt powerful. One palm coasted up her ribs until he cupped her breast, then thumbed her nipple through the thin material of her tank top. The other lifted the hem of her shirt up. Just enough to have her gasping, wondering how far he would go. But he only let his thumb rub the skin of her lower stomach. Nothing more.

All smooth and sensual, the kiss wasn’t meant to make her knees weak. No, it was meant to strengthen her enough to handle what followed. This wasn’t the main course. It was the appetizer.

Thank you. Thank you, Fate, for bringing me this fine specimen.

He murmured something in her ear, but she couldn’t hear it.

“What?” she asked. Oh God, was that her voice? It sounded so thin, so vague.

“I said marry me,” he said and bit her earlobe. 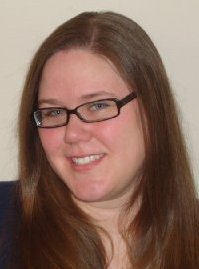 What the hell, Fate?

Jeanette Murray spends her days surrounded by hunky alpha male heroes...at least in her mind. In real life, she's a one-hero kind of woman, blessed to be married to her own real-life Marine. When she's not chasing her daughter or their lovable-but-stupid Goldendoodle around the house, she's deep in her own fictional world, building another love story. As a military wife, she would tell you where she lives...but by the time you read this, she'll have moved again.

For more information, head over to her website at www.jeanettemurray.com