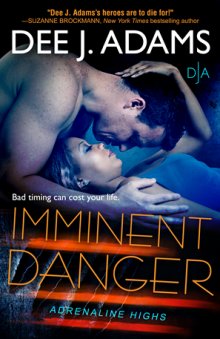 Join us for the 5th book in the Adrenaline Highs series!

LETTER FROM THE AUTHOR

How about that sense of humor?

I’m curious how many readers enjoy a little levity in a serious situation. Personally, I think it’s important to lighten up a dark mood sometimes. I think smiling and laughing are good for the soul and I also think they help heal.

I try to infuse my stories with humor, or at least a character or two that have a sense of humor.  I understand that some books are going to be heavier than others and characters have certain baggage that might not be joke worthy. But I also think that even the most cynical, sad or jaded person would benefit from some (occasional) lightening up.

Someone with a sense of humor draws me much faster than a brooding, quiet loner. Who doesn’t enjoy laughing? I have to admit that sometimes I channel Bruce Willis in Die Hard. That movie might rank as one of my all time favorites when it comes to infusing humor into a very serious situation. I mean, seriously… the guy’s feet are bleeding through practically the whole movie, but when asked, “Do you really think you have a chance against us, Mr. Cowboy?” His reply is a very simple, “Yippee kiyay, mother******.”  You can’t help but smile and cheer for him. That’s only one of many beautiful tension breakers in that movie. There’s another when he’s calling police for help and reports that hostages have been taken. The officer says, “This channel is reserved for emergency calls only.” His reply: “Lady, does it sound like I’m ordering a pizza?” Priceless!

Another movie that does a great job of infusing humor in a dire situation is Speed. It’s early Sandra Bullock and Keanu Reeves at their best.

So, yes, I’m a believer in humor. And even though both my main characters in Imminent Danger have been through traumatic, life changing events, Blake works his ass off to lighten Abbey up and show her that it’s okay to live life and find the humor.

How about you? Are you able to find humor in tough situations? I’d love to know.

For Abbey Washington, dancing is more than a dream, it’s a way to forget her past. But being at the wrong place at the wrong time makes her the sole witness to a stabbing and brings back horrible memories. Since the killers saw her just as clearly as she saw them, Abbey is now a loose end that needs to be tied up.

Blake St. John is working toward his PI license and hopes to find the man who hurt his brother in a kidnapping. He quit chasing his quiet co-worker, Abbey, months ago. But now that she needs protection, he takes on the role of bodyguard and all the feelings he tried to bury for her come back with a vengeance.

Abbey's past makes it hard to trust and an attempt on her life forces her to realize that time is running out as the killers get closer. Now, she must risk it all or face a life without the one man who showed her how to love.

“You’re in a good mood,” Abbey said, coming out of her bedroom.

Blake turned and nearly dropped to the ground in supplication. It took a concerted effort to keep his jaw from hitting the floor.

Abbey canted her head. “What?”

What? Was she kidding? What was that in thirty minutes she’d transformed herself from stunning girl to absolute Miss Universe perfection. He didn’t often see her wearing makeup and the effect it had on her already smooth skin and clear green eyes nearly brought him to his knees. Her dirty blond hair hung smooth and long around her shoulders, and the form-fitting strappy neon pink top and black leggings with a matching pink stripe down the side showed off her toned dancer’s body. He pegged her at five foot eight and she was all legs. The girl had legs to her neck. Legs he wanted wrapped around his waist as he pushed inside of her and sent them both—

“Hello.” Abbey snapped her fingers in the air. “Blake. Yo.”

He snapped out of his daydream.

“What’s got you on another planet?” She headed to the sofa and left the smell of citrus in her wake. She rifled through her bag for something.

“Uh…nothing.” He backed up toward the door. “You ready to go?” If he stayed in her apartment much longer, she might end up out of those clothes she wore. Man, he could imagine stripping everything off her. Slowly and surely exposing every inch of smooth, soft skin.

“I don’t know.” She put a hand on her hip and cocked a stance. “You ready to stop looking at me like I’m your next meal?”

His gaze flashed to hers and he smiled. “Was I doing that?”

She nodded with one eyebrow arched high.

“Good. You need to.” She swung a large bag over her shoulder. “C’mon. I don’t want to be late,” she said, passing him to open the front door.

Born and raised in El Paso, Texas, Dee J. moved to Los Angeles, California, where she acted in television and commercials for almost twenty years. An award winning author, she writes contemporary romantic suspense. She's a member of SAG-AFTRA and RWA and was thrilled to be chosen by Audible to narrate three of her (four) books in the Adrenaline Highs series (Carina Press): Danger Zone, Dangerously Close and Living Dangerously. All of her books, including the first, Dangerous Race, and her most recent release, Against The Wall, are available at Amazon, Barnes & Noble, iTunes, Kobo, ARe and other e-book distributors.

She has been married to the love of her life for over 25 years and they have a 17 year old daughter who brings them nothing but pride and joy.