For a feisty woman and a rock star god, love and rock ’n’ roll don’t mix—they ignite. Feel the fire in SWEET AS SIN by J.T. Geissinger.

You’re sexy and you know it…and so does he. There’s nothing more intriguing to a man than a woman with confidence, and when the man happens to be a rock star, he’ll be even more intrigued that your star shines just as brightly as his. (Even if it’s only in your own mind.) It doesn’t matter if you’re a size two or a size twenty-two, confidence is an aphrodisiac, so work that strut and make him drool.

If you can give as good as you get, you’ll be irresistible to a man who can get whatever he wants. Be playful but never a pushover—the harder he has to work for you, the more he’ll appreciate what a prize he’s really won.

Be the girl that isn’t shallow, money-hungry, or cold, and you’ll hold that rock star’s heart in your hand. In a life filled with mercenaries who only want him for his wallet or his fame, he’ll fall hard for you if you prove you’re the real deal, and not some skanky groupie.

Every man wants a woman who can challenge him intellectually, even if he won’t admit it. He’ll love it that your head made for business is just as awesome as your bod made for sin.

The life of a musician is a hard one, no matter how famous or obscure he might be. Show that you’ve got backbone, you’re not afraid to take a stand for what you believe in, and you’re the kind of girl he can count on in good times and bad, and he’ll not only respect you, he’ll wonder how he ever lived without you.

The opposite side of the strength coin is sweetness, which you show him with your smiles, your appreciation of his talent, and your lovely, feminine ways. Show him real, genuine affection, and he’ll be eating out of your hand.

The entertainment business is filled with people who lie, cheat, and steal, so if you’re someone that sexy rock star can tell is honest and truthful, especially when it’s not what he wants to hear, you’ll draw him in like a moth to a flame.

He’s a man, after all; he wants a woman who likes sex. Be the Venus you were born to be between the sheets and watch him crumble.

Do you have a sense of humor? I certainly hope so, because your rock god needs a good laugh as often as he can get it. If you’re the one who can always lift his mood, you’ll be indispensable.

You don’t need his money; you make your own. You don’t need his fame; you’re happy with your own life, thank you very much. You’re an independent woman with both feet planted firmly on the ground, and if he doesn’t appreciate that, you don’t want him. And it’s exactly that attitude that will seal the deal. To a man with the world literally throwing itself at his feet, a woman who isn’t impressed by his glittering lifestyle is the one he’ll want most to shower with diamonds. And girl—you’re worth it.

Twenty-something Kat Reid is loving life as an in-demand Hollywood makeup artist. She has absolutely no interest in rock 'n' roll, but in order to pay the mortgage, she agrees to work on the set of a rock video for the world-famous rockers known as Bad Habit...which brings her face-to-face with Nico Nyx, lead singer of Bad Habit and Adonis in the flesh.

However, the fiercely independent Kat isn't impressed by the hard-living, womanizing rock star. But when Nico's model girlfriend shows up to the set drunk and Kat is tapped to replace her as the video's sexy bride, her combustible chemistry with Nico suddenly threatens to consume the set. Nico feels it, too--and becomes determined to win Kat over, body and soul. Yet behind his rock god swagger, Nico hides a dark secret. Can he rock Kat's world forever, or will he just break her heart?

J.T. Geissinger is an award-winning author of paranormal and contemporary romance featuring dark and twisted plots, kick-ass heroines, and alpha heroes whose hearts are even bigger than their muscles. Her debut fantasy romance Shadow's Edge was a #1 bestseller on Amazon US and UK and won the Prism award for Best First Book. Her follow-up novel, Edge of Oblivion, was a RITA Award finalist for Paranormal Romance from the Romance Writers of America, and she has been nominated for numerous awards for her work. She resides in Los Angeles with her husband. 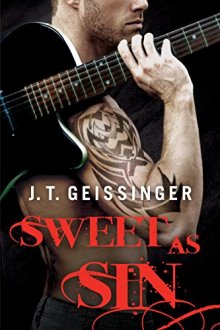