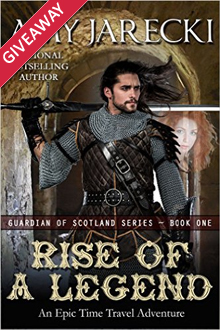 Giveaway: Rise of a Legend by Amy Jarecki

Rise of a Legend - Guardian of Scotland, #1

Running away from her catastrophic life, historical journalist Eva MacKay joins an archaeological dig at the battleground of Loudoun Hill. Unearthing the seal of William Wallace, Eva gains notoriety. But her dreams of Bowie knives—the weapon that murdered her husband—morph into great swords and dirks.

Drawn to a ruined monastery, Eva drifts into the worst nightmare of all. Awaking to the sharp point of a madman’s sword, she’s hurled into the midst of a bloody thirteenth century battle. Just when certain death is eminent, brutal arms surround the lass, dragging her deeper into unknown terror.

When Eva realizes she’s been hauled to the hideout of rebel William Wallace, a revelation dawns—she’s landed the story of a lifetime—if she can stay alive and find a way home to tell her tale.

What she doesn’t count on is her mounting chemistry with the greatest legend Scotland has ever known…or the absolute love swelling in her heart.

Copy and Paste the code below to embed this contest in your blog.

A descendant of an ancient Lowland clan, Amy adores Scotland. Though she now resides in southwest Utah, she received her MBA from Heriot-Watt University in Edinburgh. Winning multiple writing awards, she found her niche in the genre of Scottish historical romance, writing steamy edge-of-your-seat action adventures with rugged men and fascinating women who weave their paths through the brutal eras of centuries past.