I am so excited to drop by Night Owl Reviews today as I celebrate the release of FINAL SIEGE, the second book in my Navy SEAL series, LOVE OVER DUTY. I love a military man, but I am a total sucker for all types of romance and of course the super-hot heroes they deliver, which got me to thinking about my favorite types of romance heroes and why I love them so much. In no particular order (because how could you choose?), here’s my top five:

Just what is it about rock stars that send us into a girly spin? The bad boy image is definitely high up there on the list. As is the wicked smile and gravelly voice (After all, music is sexy… musicians are sexy.) But then, there’s the soft side. The emotional layer that they all have just simmering away under the surface waiting for that special someone to come along and tease it out. Discovering the past heartaches and hurt that have hardened the outer shell, the thought that we might be the one to turn them from their care-free, ‘rock star’ ways... Sigh! My favorites? Kylie Scott’s Stage Dive men and Samantha Towle’s sexy-as-hell Jake Wethers in The Mighty Storm.

Military heroes are possibly the most heroic of them all - brave, courageous, and, of course, in prime physical fitness. Honor and valor are stamped through these hard-bodied tough guys. They are trained to save the day and are not afraid to kick some ass to get the job done! What I love most about military romance and military heroes, is how love can be powerful enough to heal even the deepest wounds and scars. One of my favorite series of all time is Julie Ann Walker’s Black Knights Inc. because I totally crush on Ozzie.

What could be hotter than a guy who is creative and talented enough to create amazing, unique artwork ready to be inked onto your skin? The fact that he has a touch of rebellious bad boy about him and has more than a few tattoos of his own is a bonus. These guys often specialize in covering scars - physical and emotional - and they work their artistic wizardry to ensure imperfections become perfection. They also get pretty up close and personal with a hands-on approach… who could say no? Mmm… this one is tough, to name just one, but I’m going to go with Nick Rixey in Laura Kaye’s Hard As It Gets.

Oh, it’s all about the chivalry with these guys! Brave, loyal and gallant, medieval knights are strong, muscular and highly trained in riding and wielding a lance and sword. There’s usually a stolen glance with a fair maiden and the promise to courageously protect her honor until his dying day. This is old-world romancing at its best. Cue hot battle-scarred knight in shining armor scooping up his lady to ride off on horseback into the sunset. My all time favorite book boyfriend sits in this category. Matthew Wellesbourne in Kathryn Le Veque’s The White Lord of Wellesbourne. A (very) close second, also by Kathryn, is Davyss De Winter in L’Espada.

Billionaire romances often follow the classic fairy tale story of an unbelievably rich guy changing the life of a normal, everyday woman. Billionaires are men surrounded by vast resources of wealth, power and influence and they use every one of these in their relentless, alpha-male pursuit of the heroine. And that arrogance and drive are super sexy. But for all they have, these guys are looking for the one thing money can’t buy: love. They have to work extra hard to prove they aren’t trying to buy affections and that the material things really are secondary. But hey, the nice shoes and fancy restaurants probably aren’t that bad either. Christian Grey is probably the world’s most well-known billionaire, and who am I to disagree. But it’s Chase Parker in Vi Keeland’s Bossman that gets my vote.

What are your favorite tropes, and who are the heroes you love?

IN THE LINE OF FIRE.

Former SEAL Malachai “Mac” MacCarrick is all about the future he’s created with his Navy brothers in Eagle Securities, taking assignments in the most dangerous places, and doing things no one but ex-military would attempt. But when an urgent phone call brings his troubled past—and the woman he once loved—into the present, it’s a chance to redeem himself that he can’t refuse.

An investigative journalist researching an explosive story, Delaney Shapiro tells herself she got over Mac—and his role in her brother’s death—a long time ago. But the first moment she sees him at her bedside in an overseas hospital, she knows it’s not true. Every moment together rekindles the desire that once burned between them, and now that she’s a target for an emerging Russian arms dealer, Mac won’t let her out of his sight. To protect her, he’ll risk it all—including his life…

Scarlett Cole is a writer of contemporary romance and a two-time RITA finalist. Her debut, THE STRONGEST STEEL, has already become an Amazon best seller in romantic suspense, was a Best Debut Goodreads Author Finalist 2015, and Authors On The Air Global Radio Network Contemporary Romance Pick of 2015. The FRACTURED HEART, THE PUREST HOOK, and THE DARKEST LINK are all available now.

Having travelled the world for work and fun, Scarlett is a citizen of both Britain and Canada. A true city-dweller, she considers Toronto and Manchester home and likes to set her books in vibrant locations such as Miami, San Diego, and Toronto.

Rep'd by Beth Phelan at The Bent Agency, and published by St. Martin's Press. 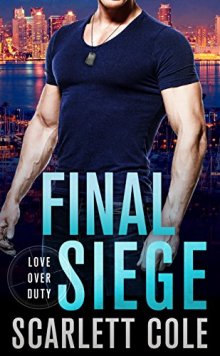