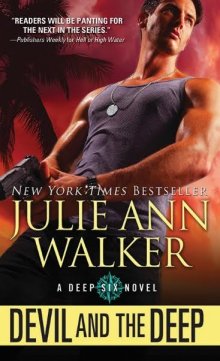 Exclusive Excerpt: Devil and the Deep by Julie Ann Walker

Join us for an Exclusive Sneak Peak into Julie Ann Walker's book "Devil and the Deep"!

This book releases July 5th, 2016. If you have not read the first book, jump on down to enter to win a copy.

Maddy Powers’s life revolves around cocktail parties, political fundraisers, and charity events — but she can’t forget the daring former SEAL who appropriated her father’s yacht a few months ago … or the scorching kiss they shared before he disappeared into the deep blue sea.

Bran Pallidino carries a dark secret behind his lady-killer eyes — one that keeps him from pursuing a serious relationship with Maddy. But when she’s taken hostage during a trip to the Dry Tortugas, the men of Deep Six Salvage drop their treasure hunt for a sunken galleon and embark on a dangerous mission to save Maddy.

As they fight her merciless kidnappers, they discover this isn’t a simple hostage situation, but something far more sinister. Passion boils between Bran and Maddy, but what good is putting their hearts on the line if they don’t survive the dawn?

“S-so…” She shook her head. “I guess…that begs the question: just how many people have you slept with?”

Even in the shadows, she could see the line that formed between his eyebrows. “I don’t know.”

“S-so…” She had to shake her head again to make her tongue work properly. “You don’t know?”

“Stop repeating everything I say in the form of a question,” he said, the line between his eyebrows deepening.

“Can you at least… I don’t know…” She made a rolling motion with her hand. “Ballpark it for me?”

He screwed up his face and seemed to be making a mental tally. Two seconds stretched to five. Five stretched to ten. Out on the pilings somewhere, a roosting seagull took offense to something its neighbor did, screeching its displeasure. The lighthouse overhead clicked mechanically every time it made a full rotation. Beneath them, the fort groaned, shifting with the sands like an old man trying to find a more comfortable position.

“Do you need an abacus?” she demanded when she couldn’t stand it anymore. I mean, really?

He shook his head. “Do people still use those?”

“Look,” he said. The whites of his eyes glowed when he rolled his eyes like she was the insane one. She was so close to whacking him upside the head that she had to recross her arms. “All I can say for sure is the number is more than you can count on your fingers and toes. But less than the population of Miami.”

“Gross!” She curled her lip.

“Hey!” he barked in affront. “I thought you said slut-shaming went out in the nineties.”

“Sorry.” She held up a hand. “You’re absolutely right. It’s not my place to judge. Just…” She wrinkled her nose. “Are you…um…up to date on all your shots?”

The look he gave her was withering. “I’m not a dog.”

“Well, that’s obviously not true,” she muttered. “You’re a horn dog.” This time the well, duh was tacked onto the end of her sentence by her inflection. And then a thought occurred. “Or is it somethin’ else? Are you a…” She glanced around as if worried someone might be listening in before lowering her voice. “Are you a sex addict? Are you undergoin’ treatment? Is that why you—”

“I’m not a sex addict!!” he whispered impatiently.

She turned her head and narrowed her eyes. “How can you be sure? Have you ever consulted a professional?”

He blew out a huge, windy sigh and she could tell he was hanging on to his patience by a thin, red hair. “I am not a sex addict,” he insisted. “Do I enjoy sex? Undoubtedly. But I don’t have to have it. In fact, there were times when I was away on long missions that I went months without it.”

“Whole months?” she stressed sarcastically. “Wow! I think the Catholic Church might want to sign you up for an honorary priesthood. Whole months!”

“And I know I don’t need shots ’cause the Navy tested us. And also because I’ve always been extremely careful,” he continued as if she hadn’t spoken. “No glove, no love, as they say.”

“I don’t know!” His exasperation was showing. Join the club. “Everyone!”

When she didn’t respond, simply because she wasn’t sure how to respond—she was still trying to wrap her mind around Mr. Casanova here and whether she was shocked, offended, impressed, or what—he sighed and added. “You’re the first woman I’ve been friends with, Maddy. And I wanna keep you as a friend. The first thing I do in the mornings is check my email, and it’s the last thing I do at night. I look forward to our talks, our jokes, our end-of-day wrap-ups. Hell, I even like our arguments.”

Warmth spread in her belly like the hot toddies her daddy liked to sip at Christmastime. “Since when do we argue?”

“Uh, every time you try to convince me Silence of the Lambs should rank higher than Shawshank Redemption in a tally of the one hundred greatest movies of all time.”

“Excuse me,” she said, immediately distracted by the old disagreement. “But Silence of the Lambs won five Academy Awards. How many did Shawshank Redemption win?”

“It was nominated for seven.”

“You cannot base the merits of a movie simply on the number of awards it—” He shook his head and karate chopped the air. “Never mind. My point is I like you, Maddy. I know I’m repeating myself, but I’m doing it because I don’t think you fully understand how huge it is for me to say that. I like you. So no matter how much I want you, no matter how much I dream about screwing your brains out”—That sounds good. Let’s do that—“I refuse to do anything about it because I value your friendship more than I want another hot roll in the hay.”

She was missing something. The pieces were there, but she had yet to put the puzzle together. “I don’t understand. Why can’t we do both? Why can’t we be friends and screw each other’s brains out? Isn’t that how most—”

“’Cause you’re gonna want something more than that. You’re gonna want a relationship.” He said the word like it was foul. “And I’m not gonna give it to you. Ever. I’ll never be your boyfriend, much less anything more.”

Wow. And there it was. The truth. Finally.

You asked for it, her conscience reminded her.

Yes. Yes, she had. Which proved she was an idiot.

A hollow feeling opened up inside her, yawning and stretching, filling her up and emptying her out at the same time. Not wanting him to see how off balance she was, she said flippantly, “Well…when you put it that way, I guess I see your point.”

He blinked at her for a full five seconds. Then the tension in his shoulders relaxed. “So,” he said, “friends then?”

She pasted on a false smile. “Friends,” she agreed, extending her hand.

He looked down at her offering like it might be a turd floating in his cereal. But after a moment’s hesitation, he grasped her fingers in his warm palm.

The second he did, she understood his reluctance. Sparks, baby. Huge, massive, immediate sparks that ignited her blood and dizzied her brain. He quickly released her hand, and the skin on her palm tingled with phantom sensation.

“Good thing this friendship of ours is usually separated by the Gulf of Mexico, am I right?” he joked, once again leaning against the lighthouse, resuming his nonchalant stance, arms crossed, one knee bent.

“I guess so,” she managed even though her mind reeled from their conversation. As for her heart? Well, it reeled with something too. Sadness. Sadness and disappointment, and disillusionment.

Devil and the Deep - The Deep Six, #2 on Amazon

Julie Ann Walker is the New York Times and USA Today bestselling author of the Black Knights Inc. romantic suspense series. She is prone to spouting movie quotes and song lyrics, and prefers impromptu travel over the scheduled kind. You can find her on her bicycle along the lake shore in Chicago or blasting away at her keyboard, trying to wrangle her capricious imagination into submission. For more information, please visit www.julieannwalker.com or follow her on Facebook, www.facebook.com/jawalkerauthor, and Twitter, @JAWalkerAuthor.