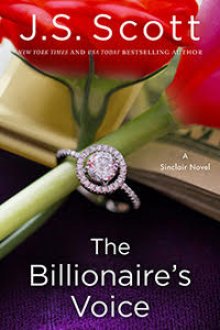 As an extreme-sports mogul, billionaire Micah Sinclair is comfortable taking risks. But nothing—and no one—has ever challenged him like Tessa Sullivan. He’s fascinated by the woman who’s overcome so much, including the loss of her hearing. The petite blonde dynamo, a small-town restaurateur on the Maine coast, is the most courageous person he knows, and he wants her in his bed. Now all he has to do is convince Tessa to explore their desire.

After a lifetime of loss, Tessa’s finally come to terms with her limitations. Or she would, if a certain sexy businessman weren’t pushing her to want more. And to want him. All her remaining senses are clamoring for her to touch, taste, and feel. But her doubts tell her to go slow when their passion gets too hot.

Micah’s determined to prove to Tessa that she can still have everything she’s ever wanted, including his love. But will she listen to her head—or her heart?

The Billionaire's Voice - The Sinclairs, #4 - Purchase on Amazon

The water turned off soundlessly as Tessa pushed the handle and stood in the enclosure for a moment to wring out her hair. As she stepped out, she reached for the clean towel she’d tossed on the hamper next to the shower, only to find that it wasn’t there.
A shriek of startled fear left her mouth as she turned and saw a very large, very male hand holding out the missing sky-blue towel. Her eyes flew to his face as she screamed, recognizing the intruder.

“Oh, my God. What in the hell are you doing here?” she asked Micah Sinclair as he slowly released his grip on the towel when she reached for it shakily, not bothering to hide the heat in his dark-brown eyes as he stared shamelessly at her nude body. Finally, she jerked on the material hard, freeing the towel from his reluctantly loose grip.

A fiery blush flooded her face and body as she quickly wrapped it around her, wishing she’d grabbed one of the larger, fluffier ones in the closet for her shower, but she didn’t want to use Randi’s nicer stuff. As it was, the threadbare cotton piece of linen she’d chosen barely covered her ass and other private areas she didn’t want exposed. She had no choice but to look at Micah—even though she was mortified—if she wanted to know his response.

His eyes were both hungry and mischievous, a combination that was nearly irresistible.

“I could ask you the same.” He answered slowly, signing with American Sign Language—ASL for short—as he spoke. “Not that I mind. Now we’ve both seen the other one naked.”

Deep, silky smooth, and sinful. That was how she heard Micah’s voice. She had since the minute she’d met him.

Tessa was good at reading lips, but she found it much easier with people she knew well. Although Micah wasn’t exactly a stranger, she’d always been able to understand him, for some reason. She’d been able to pick up the majority of his words from their very first encounter, which had been in a very similarly embarrassing way—except he had been the one standing in a bathroom naked, a tantalizing sight that Tessa had never been able to erase from her brain—no matter how much she tried. “I’m caretaking the house,” she told him hastily, trying to pull the towel more snugly around her body. “I moved in several months ago. After Evan and Randi’s wedding. What are you doing here?”

She shivered, but she wasn’t really cold. The warmth in Micah’s eyes was enough to heat the small home for an entire Maine winter. But there was something about him that looked . . . different.

Micah Sinclair was usually cocky, a trait that the Sinclair men shared. Not rude, exactly, but Tessa was starting to think it was a behavior that every Sinclair male had acquired at birth. Every one of them exuded almost an obnoxious confidence that could also be perceived as arrogant.

Silently, her eyes moved over him, taking in every detail. He was dressed casually in a pair of jeans that had softened and faded with age, and hugged his body lovingly. The T-shirt he was wearing probably dated back to his college days, the blue fabric sporting the logo of an Ivy League school. It wasn’t his clothing that seemed . . . off; it was something else that seemed different. It wasn’t strange to see  him in comfortable clothing. Other than his formal dress for Evan’s wedding and Hope’s winter party, Tessa had noticed that he wasn’t a fancy dresser, even though he was no less wealthy than his brothers or cousins.

Usually, he appeared to be a rugged, outdoorsy kind of guy. Probably because that was exactly what he was: an extreme-sports mogul. But today he wasn’t exuding the same barely-containable energy he usually did.

She studied his face again, noticing the weary look and the dark circles beneath his eyes.

“I bought the house,” he announced suddenly.

Tessa was glad Micah had signed along with his statement, because she’d been so preoccupied with his eyes that she hadn’t looked at his lips. “This house?” she squeaked.

“How is that possible? Randi didn’t tell me, and she and Evan are away in the Orient for a belated honeymoon.” Her friend would be gone for several more weeks, and she hadn’t texted Tessa for several days. Surely Randi would have let her know the house had sold so she could get out before the new owner arrived.

Micah grinned at her, making him suddenly seem much more approachable. “It was a quick deal. Evan and Randi are under the impression that I’m not taking possession for a while. They wouldn’t have wanted you to leave.”

“Then why are you here?” she asked, feeling uncomfortable standing in the bathroom with only a towel wrapped around her body while she conversed with the hottest guy she’d ever met.

Honestly, it was pretty humiliating.

He shrugged. “Spontaneous trip. I decided to check out the property once the deal closed.”

Tessa knew instinctively that his decision to come here wasn’t completely on a whim. She might not be able to hear, but her other senses and her instincts were sharp, and she could feel that something wasn’t quite right. “And did you check out the property?” she asked, feeling awkward.

“Not all of it. I didn’t just buy this place. I purchased several other parcels that are connected to this property. That’s a lot of acreage to see.” He paused before adding, “I’m actually rather glad I decided to check out the house first. My timing was excellent.”

He was teasing her, but she still blushed all over again. “I’m not glad you’re here. I’m naked,” she replied bluntly.

“Unfortunately for me, you aren’t anymore.” His grin grew broader, and his eyes caressed her devilishly.

The thought made her feel dumbfounded, even though she was sure that Micah probably flirted with every woman he met. Men didn’t look at her as a sexual creature. She was deaf, disabled as far as most males were concerned. Guys might like her as a friend, but they did not look at her like she was the hottest female on the East Coast. Except . . . for some reason . . . this man did.

“I need to get dressed,” Tessa mumbled, trying to make her way around Micah Sinclair’s muscular body blocking the entrance to the small bathroom. The air in the room was getting electric with sexual tension and it made her uncomfortable, especially since the real attraction was probably all coming from her.

He caught her bare upper arm and tilted her face up to look at him. “Tessa?”

She felt her heart skitter as she inhaled his intoxicatingly masculine scent. He was too close, so close that she could feel the heat of his body, pressed up against his hip.

“Yes?” she choked out, wanting to escape the small room that suddenly felt much too warm and much too small.

“I didn’t mean to scare you. I’m sorry.” He didn’t sign this time, but she caught his words.

“If what you’re saying is true, I’m the one invading your privacy,” she reminded him, her gaze staying on his lips because he wasn’t signing. “I wish I had known the property had sold. I would have left right away.”

“You’re not intruding. In fact, seeing you here is the best thing that’s happened to me in a while.”

Damn. He must be desperate for entertainment if seeing me here in his new property is actually a good thing.

Not knowing what to say, she scrambled around him and pulled her arm from his grasp. “I’ll go as soon as I can,” she told him hastily as she darted out of the bathroom.

“I hope not.” Micah smiled at her departing figure, his soft, low comment going unheard and unnoticed by the fleeing woman.

The winners of this contest have been contacted by the sponsor.