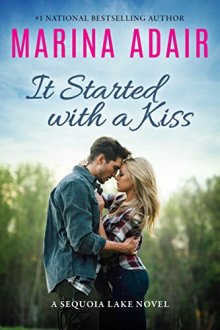 Exclusive Excerpt: It Started With a Kiss by Marina Adair + Excerpt

With a kidney transplant behind her, Avery Adams is determined to channel her inner adventurer and explore everything life has to offer. Only problem is, the closest she’s ever come to a real-life adventure was sixth-grade science camp. So to seize the summer in her rustic Sierra Nevada town, she takes a job as a guide at the local adventure lodge. But Avery doesn’t realize her biggest challenge will register at six-plus feet of rugged good looks and alpha-male charm.

As a member of the Sequoia Elite Mountain Rescue team, Tyson Donovan has made a life out of cheating death and rescuing weekend warriors from the treacherous terrain. “The world is my home” is more than just a motto; it’s what scares off women who would otherwise try to tie him down. When his dad’s health lands the family’s adventure lodge in serious danger of going up in flames, he moves home—and quickly remembers why he left. Until he meets Avery, the irresistible new guide who makes him want to stay.

Tyson gives the inexperienced Avery a lesson in romance that her books could never teach her. And with her undeniable spirit for life, Avery shows Tyson the healing power of love. But with one misstep, everything comes crashing down, and they’ll both have to take the biggest leap of all—into the kind of adventure that lasts a lifetime.

Avery was breathing heavy. He could see the pulse beat at the base of her neck as clearly as the hesitation in her eyes. Oh yeah, Little Miss Live Loud might pretend to be all fearless and devil-may-care, but being impulsive wasn’t her normal MO.

Ty was a ninja at making rapid assessments of subjects. A skill that had saved his ass too many times to count. Being able to size up a person’s nature and accurately predict their next reaction in a matter of seconds was crucial when hanging from a chopper and looking down at the rough waters of the Pacific with a terrified and often irrational subject in tandem. And Avery was about as close to being a balls-out kind of person as she was to being a princess.

So he decided to call her bluff. “So this living loud thing—I don’t buy it.”

She didn’t back down and didn’t lean away; instead, she zeroed in on his mouth and said, “I’d like to prove you wrong.”

Being wrong went against Ty’s nature. Always right and never in doubt had saved hundreds of lives. But if the determined heat in her pretty blue pools were anything to go on, Ty would be willing to man up and admit defeat this one time. Because he’d bet that being on the losing side of this discussion would taste like heaven.

Only Harris, the slowest bartender in town, chose that moment to tap into his super speed and reappeared with their drinks in record time.

He cleared his throat, and when Ty made eye contact, his good old cuz was looking back with a grin that made Ty want to punch him in the throat. “Here’re your drinks.”

“Thank you.” Unabashed, Avery beamed up at Harris and then pointed to her Shirley Temple. “That’s not for me, it’s for him,” she said, turning those pearly whites Ty’s way. “For him to drink while he’s making me my crown. So can you put an extra cherry in it and an umbrella? A pink one?”

Harris choked on a laugh. Not that it stopped him from reaching under the bar and placing a prissy pink umbrella right in the center of Ty’s drink. “He offered to make you a crown?”

“Yes, he did, for after I ride Widow Maker and am crowned princess for the day.”

“Although I’d pay good money to see ham-hands there craft you a crown, Widow Maker’s incapacitated at the moment.”

Avery looked toward the big pen in the corner, covered with red mats and a giant yellow OUT OF SERVICE sign, and her smile dulled.

“What happened?” Ty asked, willing to call in a favor to get Widow Maker back in the ring if it meant he could watch Avery give him hell.

“Ladies’ night and seniors’ Shot4Shot landed on the same Wednesday. Had to call in the sheriff.” Harris shivered. “Got a cleaning crew coming in later this week, so he’ll be back to business as usual by the weekend.”

“Bummer.” She sounded genuinely disappointed. “I guess my coronation will have to wait.”

“The night is just getting started,” Ty said. “Tons of time to live loud.”

Avery turned around and met Ty’s gaze, and hot damn, he didn’t know what was on her mind, didn’t care.

She gave one tug at his shirt collar, and their lips collided, hard and with heat, and he was game for whatever she had planned. Because if this was what living loud tasted like, then he wanted a second helping. Not only did Avery pull him close enough to smell the evening chill on her skin, she pressed her mouth to his in a kiss that was so unexpected it had every part of him begging to take the leap.

Because right there, beneath the flashing neon BUZZ SAW BROWN ALE sign and in front of Harris and half the town, Avery Adams, adventure coordinator, kissed him. And holy hell, the woman could kiss.

It started out slow, and a brush of air escaped her mouth, as if she’d surprised herself. There was a warmth, then a heat, and finally those lips of hers parted, ever so briefly, in a move that was as seductive as it was addictive. And just when Ty was about to go in for a second taste, she lifted her head and smiled.

It wasn’t smug or wicked, like he’d expect, but sunny and a bit giddy. As if she was delighted with herself. He wanted to keep the get-to-know-you party going, but then Harris laughed, and he realized that a public venue wasn’t the place.

Marina Adair is a National bestselling author of romance novels. Along with the St. Helena Vineyard series, she is also the author of Tucker's Crossing, part of the Sweet Plains series. She currently lives with her husband, daughter, and three neurotic cats in Northern California.

As a writer, Marina is devoted to giving her readers contemporary romance where the towns are small, the personalities large, and the romance explosive. She also loves to interact with readers and you can catch her on Twitter at @MarinaEAdair or visit her at www.MarinaAdair.com.