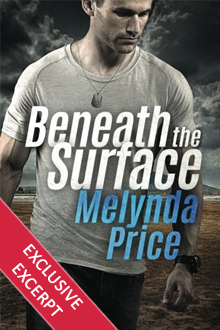 Exclusive Excerpt: Beneath the Surface by Melynda Price

He was the last man she wanted to turn to for help. But when freelance journalist Quinn Summers uncovers a shocking secret with the potential to rock Washington, DC, she reluctantly finds herself on his doorstep. Someone intends to silence her forever, and Asher Tate may be all that’s standing between her and a vicious killer.

Overbearing, arrogant, and insanely hot, the ex-marine Special Forces officer turned mercenary for hire is no bodyguard—especially when it comes to the stubborn woman who sets his blood on fire as quickly as his temper. Quinn Summers is a powder keg of trouble just waiting for a match, and he isn’t surprised that the feisty beauty has made some dangerous enemies.

To survive, she’s going to have to play by his rules—and that means stepping into Asher’s world, where he controls the playing field. But in his fight to save Quinn’s life, he just might end up losing his heart…

That woman just kissed his horse.

Asher stared at her in shock as she walked past him in typical Quinn fashion—chin notched in that stubborn lift that set his teeth on edge, violet eyes fixed straight ahead. The glimpse of her tenderness toward Jack hit him in the gut like a sucker punch. His chest tightened uncomfortably, leaving him a little breathless. Just when he thought he’d figured Quinn out, she went and did something completely unexpected.

But then again, did he really know her well enough to make that kind of assumption? The more time he spent with her, the more he was beginning to suspect there was a lot more to Quinn Summers than what met the eye. If she only knew the significance of what she’d just done, would she still have done it? First of all, you kiss a man’s horse, you might as well be planting those lips on him. And secondly, Jack didn’t let anyone touch him but Asher—ever. And here the beast was, practically drooling all over that woman.

“What the hell was that?” he grouched to the stallion as he opened Marley’s stall and ushered the gelding inside.

“Yeah, I know she’s pretty. Those are the ones you’ve gotta watch out for. She’ll wrap you around her little finger, I’m tellin’ ya.” He closed the stall door and set the lock, not sure who that warning was meant for—him or the horse. Both would do well to heed the advice.

He headed to the back of the barn and grabbed a square bale. He dropped it between the stalls, then cut the twine with his pocketknife and stuffed a few flakes in each feeder. “She’s gonna break your heart, boy. Don’t say I didn’t warn you.”

Jack nodded his head, his common response to whatever Asher said. With those parting words, Asher slid the barn door closed and latched it. As he walked up to the house, his gaze was drawn to the loft that was lit up like a fucking Christmas tree. Quinn was standing there by the dresser, her back to him. She was wearing nothing but a pair of white lace panties, the cheeky cut.

First thing tomorrow morning, he needed to get some curtains on those damn windows.

The lucky winners have been contacted by the contest sponsor.

Melynda Price is a multi-published author of contemporary and paranormal romance. What Price enjoys most about writing is the chance to make her readers fall in love, over and over again. She cites the greatest challenge of writing is making the unbelievable believable, while taking her characters to the limit with stories full of passion and unique twists and turns. Salting stories with undertones of history whenever possible, Price adds immeasurable depth to amazingly well-crafted books.

She currently lives in Northern Minnesota with her husband and two children where she has plenty of snow-filled days to curl up in front of the fireplace with her Chihuahua and a hot cup of coffee to write.