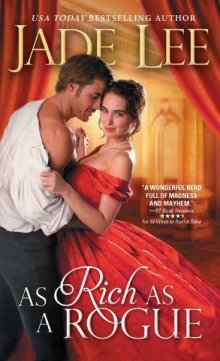 Exclusive Excerpt: As Rich as a Rogue by Jade Lee + Giveaway

Today the lovely and vibrant Jade Lee is visiting with us on Night Owl Reviews. She has provided you an EXCLUSIVE glimpse into her latest book, "As Rich as a Rogue".

Giveaway: Jade's publishing company is also offering a contest for two copies of "As Rich as a Rogue", just for NOR readers.

We hope you all enjoy the ride!

A most unusual wager

Mari Powel's fiery Welsh temper is up. Peter Norwood, Lord Whitly, is back in town after six years romping around India making his fortune. Mari blames him for her social downfall and has spent all this time clawing her way back into the ton's good graces. How dare he show up on his first day back and publicly embroil her in a bet involving long-awaited apologies, illicit kisses, and Lady Illston's unruly parakeet? Mari is outraged, and is going to show him-and everyone else-what she's made of. Little does she know, the unrepentant Lord Whitly has been dreaming of her all this time. Now he'll do anything to win the wager-along with Mari's heart.

Lord Whitly and Miss Mari Powel have history. Six years ago he gave her the nickname Wayward Welsh and that has dogged her so much that she can’t find a husband. Lord Whitly, on the other hand, lives to do exactly what he wants and damned to anyone who dares say otherwise. Until, of course, he tries to bend the society matrons to his will.

“Oh, listen,” said one of the dowagers. “They’re starting again. You young people go dance. That’s what we’re here for, you know, to watch you enjoy yourselves.”

“Oh, and look, Miss Powel, here is that handsome Lord Byland come to claim you. I’m afraid you’ll have to give her up, Lord Whitly.”

“I’m afraid I must,” Whitly said, and he almost sounded regretful. “Fortunately, I will reclaim her hand soon enough. She has consented to waltz with me.”

“Miss Powel, really?” cried the next. “You’re going to waltz?”

“Oh, my dear, I don’t think that’s quite proper,” added a third.

On the objections went. Enough that it became quite uncomfortable, until Lord Whitly raised his hand for silence. Strangely enough, it worked, and each member of the dowager chorus quieted.

“I cannot believe my ears,” he said solemnly. “How could you think the waltz is anything but proper? Is it impossible that you’ve never tried this dance yourselves? Can it be said that you condemn something without having tried it?” She had no idea how he could know that, but it was true. As far as she was aware, none of them had ever tried the waltz.

The dowagers gasped. And then quick bursts of answers exploded all around.

He waved away their objections with a casual sweep of his large hand. “Then I shall make it my purpose to get each of you a partner for the waltz. You can’t very well object to something unless you’ve tried it.”

“Who would want to dance with us? No, no, that’s for young people.”

Mari glanced to Lord Whitly. His eyes danced even as his lips curled.

“You like the challenge,” she abruptly said, surprised enough to speak her thoughts aloud.

His gaze jumped to hers. “What?”

“Everything’s a wager to you. Will the footman leap to your tune? Will there be a scandal as a result? Can you get the ladies to dance?”

He straightened. “Yes, no, and of course.” She snorted, and he arched his brow. “Do you doubt my ability?” “Of course I do! You can’t get all of them to dance, and certainly not the waltz.”

His grin widened. “And if I manage it? Before the evening is done?”

Mari didn’t know how to answer. She was acutely aware of Lord Byland standing, cooling his heels, and yet she couldn’t force herself to move away from Lord Whitly. Not with him turning that arch look straight at her.

“If you manage it, my lord, I shall…I shall tell you a secret. About me.”

His eyes widened. “What ho, that’s an exciting forfeit.”

“And if you fail—which you surely will—then you shall tell me one about you.”

He chuckled, the sound rich and deep. “And if I have no secrets?”

“That’s a bounder, if ever there was one.”

He nodded. “True enough. Very well, I accept.” Then he turned a gimlet eye on each of the dowagers. “And I expect you ladies to help me win my forfeit.”

“No,” Mari returned archly. “I have spent the last six Seasons in attendance on these venerable ladies. I assure you, they will help me.”

Then there was no more time. The first notes of the new set began, and Mari had to rush with Lord Byland to find their places.

But what about the waltz? she wondered. And what secret was she about to learn from Lord Whitly? Because she knew the dowagers. They had been damning the waltz since its first appearance in the London ballrooms. Even so charming a man as Lord Whitly would fail in getting them on their feet for so scandalous a dance.

Get the Book on Amazon

USA Today bestselling author Jade Lee has been crafting love stories since she first picked up a set of paper dolls. Ballgowns and rakish lords caught her attention early (thank you Georgette Heyer), and her fascination with the Regency began. An author of more than 40 romance novels and winner of dozens of reader awards, she brings laughter into the sexy nights of England's elite. Quirky characters and sexy banter are her hallmarks. Find out more at her website www.JadeLeeAuthor.com, or check out her wild contemporary half at www.KathyLyons.com.