Hiya everyone. Thank you so much Night Owl Reviews for having me. Fall is in the air, and with it the sweet smell of pumpkin spice and all good things that make you think of the holidays that’s just around the corner. For me, I love to see the leaves change and start to decorate. Yep, I’m one of those people who put up fall decorations at the beginning of October and then…I have my tree up, along with soo much more Christmas decorations before Thanksgiving day. Why you ask? Well, my family and I go to Northern Minnesota, or as I like to call it, The Tundra, every year to visit my in-laws for Christmas so I like to enjoy the decorations for as long as I can.

I guess that’s why I start my fall decorating early, since I also start my Christmas decorating before the turkey carving LOL. When I say I decorate for Christmas though…I mean, I DECORATE every room. I have a large home, but I just bought this one a year ago last October, so even in our family home before I decorated every room. I collect Santa’s you see. Like, I’m kind of obsessed with them. I see them, and say “I have to have him” if he’s not your everyday, run of the mill ones you see in bulk. I have over 300 of the jolly guys ranging from 6” to over 6’. I’ve just added a new one to my collection on October 13th as my hubby and I were at the Plaza in downtown Kansas City. There was an artisan show and a local man had hand carved some gorgeous ones. Unique ones. I mean they are #amazing. So, I looked at my hubby with my most loving, I need him for my collection eyes. And the rest, they say, is history.

I have yet to write any of my characters with this same sort of…awesome addiction “wink” but never say never. Although, I did just finish the sixth book in my Navy SEAL series and most of them move around with the Navy so I can’t see them having a Santa collection. However, once you read Delta Redemption that releases October 24th, I just might find a way in an upcoming book.

How about you? Do you love to decorate for the holidays? Comment with a favorite holiday tradition that you do for a chance to win a signed paperback of Delta Salvation, book 1 in my SEAL Team Salvation and an ebook copy of Delta Redemption book 6.

Jase had his life mapped out in front of him. He was the leader of SEAL Team Phantom and planned to continue moving up in the ranks, until he met his mentor’s daughter. Falling for Brooke Frazee wasn’t on his agenda, but from the moment he saw the Admiral’s daughter, all bets were off.

Brooke’s life wasn’t always easy, but she dreamed of someday finding her happily ever after.   She never planned on falling for a military man like her father, until she unexpectedly meets Jase Tyler at her door. The thought of being with him both terrified and excited her.

Jase knew Brooke was the woman for him.  After declaring their love for each other they were forced to part ways, for reasons Brooke will never understand.   Jase is left with his heart in shreds as he’s shipped off on a mission, unsure of his return.  Will war make him forget everything he’s leaving behind or will his mission leave him branded as a traitor?

Brooke was shattered when Jase left, but she was forced to move on with her life even though her dreams had changed.  She’s not prepared when the man from her past walks back through the door, or for the secrets they uncover while on the run from danger.

Jase, no longer a member of Phantom Team, but not knowing who else he can trust to protect what he holds dear, calls on his former SEAL Team.  As they reunite as a unit and work together, they find out that nothing is what it seems. If Jase and Brooke live through the coming days, will their love be able to endure when the dust settles?

The contest was hosted by the authors and she will contact the winner.

I'm a full-time wife and mother who has loved to read and write since childhood. At the age of thirty-two, I survived cancer and decided I could do anything. Four years later, after meeting many wonderful writers, several of whom I can call friends, I decided to write a book. Now four years later I've attained my first goal, becoming a published author.

I love to write and have all kinds of stories in my head waiting to be written. The best part about my new journey is that if I don't like it, I can re-write it, unlike real life, so I always make sure there's a happy ending.

I'm creating new worlds, and I hope you all enjoy them with me. I can guarantee you'll always have a hero or two you'll love, and a heroine you'll want to be. 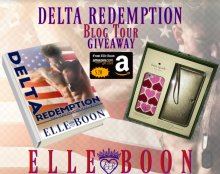