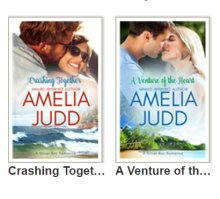 NOR Notice: Book 1 in Amelia's Silver Bay Series is on sale for the awesome price of .99 on Amazon!

My process for moving a story from inspiration to publication varies from book to book. Sure, I might travel along or cross over the path I took on a previous novel, but there’s a darn a good chance I’m going to veer off course at some point.

In the first novel of my Silver Bay series, A Venture of the Heart, I started with character creation. It took me weeks to breathe life into my hero and heroine. That’s a ton of time to spend, but I’m a character driven writer. I needed to have a solid understanding of them before I could move the story forward.

In contrast, the hero and heroine in my recent release, Crashing Together, were secondary characters in the preceding book. This means Kat and Logan’s temperaments and basic background information had already been established and introduced to my readers. While I still needed to develop and deepen their personalities and backstory, it wasn’t necessary for me to begin the process with this step.

So rather than starting with character creation, I sat down with a creative friend who designs and sews her daughter’s competitive figure skating outfits. While she sewed her sparkly masterpieces, we brainstormed situations to force Kat and Logan into facing the issues in their lives they’d both been avoiding. With her help, I was able to outline a plot to challenge Kat and Logan throughout the story with the ultimate goals being individual growth, mutual love, and, of course, a happily ever after.

With a working outline in hand, I spent the next three months chugging coffee, iced tea, and Diet Coke while I cranked out a rough draft. Even though my willful characters went off script a number of times during these writing sessions, I crossed my fingers and sent this draft to my editor for a full content edit.

Four weeks later, my patient and meticulous editor returned it to me with fifteen pages of recommendations to strength virtually every aspect of the story. While totally overwhelming (and borderline depressing) to read, in the end I agreed with 95% of her suggestions. I spent a month rewriting the story to incorporate her spot-on input then sent it back to her for a second edit. Another month later, she returned it with far fewer critiques than the first round. After one more round of tweaking on my part, I passed it along to my proofreader for the final polish.

From the first creative spark to the final click of the publish button, finishing a novel takes me a staggering amount of work, dedication, sacrifices, and optimism. I’ll admit, on the tough days I often wonder if it’s worth all the effort. On the great days, however, when one of my books gets an amazing review or a reader messages that she adored my characters, I know that writing love stories is without doubt the best gig ever!

A Venture of the Heart - Silver Bay Book 1

And with those frigid words, karma kicked his ass and blew his dreams into a million tiny fragments.

Paxton Bennett walked away from a privileged upbringing to devote his life to La Vida de Ensueño, the socially responsible luxury resort he manages in Costa Rica. No way will Pax let a hotel chain swallow up La Vida and turn it into another lifeless clone. All he needs is a loan so he can match a buy-out offer. Unfortunately, every damn bank keeps saying no. He has one last hope--an on-site visit from a loan officer that he's sure he can impress...

Banker Sage Somerset doesn't want to see Pax Bennett across a busy coffee shop, let alone spend a week at a tropical resort with him. After their cringe-worthy last encounter, just hearing his name makes her blush or curse. Plus, there are snakes in Costa Rica. A lot of snakes! Determined to remain professional on her unwelcome assignment, Sage hopes she can survive a week in Pax's world...

But a quirky staff, meddlesome family, and the night-time visit of a tiny green gecko soon threaten to turn business into pleasure. Will Pax and Sage fight their troublesome chemistry? Or will they take a chance on the biggest venture of all--each other?

Next step: seduce Logan. Which would likely be as difficult as convincing him to take his next breath of air. After all, how hard could it be to strike up a game with the world's biggest player?

Determined to hide a fear too embarrassing to admit, recently-evicted Kat Bennett accepts an impromptu offer to crash with her brother's best friend and player extraordinaire, Logan McCabe. When things heat up between them, spitfire Kat decides to embrace temptation rather than fight it. A steamy fling might be just the distraction she needs from her own problems. And who better to fling with than a gorgeous Australian who's only in the country for a few months?

Logan loves his no-strings-attached lifestyle. Or at least he did until Kat, a woman he has always been attracted to but vowed not to touch, moves in with him for the summer. Even though getting to know beautiful, fiery Kat heats his blood and shoots his relaxed vibe to hell, Logan is determined to keep his word and his hands to himself.

But Kat plans to prove some promises are meant to be broken. Will living with Kat for the summer convince Logan it's time to start playing for keeps or will their unexpected love crash and burn?

After receiving a degree in international affairs, Amelia lived and studied in Belgium for over three years. During her time in Europe, she traveled extensively, earned a master’s degree, and fell in love with writing contemporary romance.

Amelia now lives in the Midwest with her sports-loving husband, two active kids, and a lovable dog that insists on staying by her side day and night. When she isn’t writing, she’s spending time with family, hanging out with friends, chauffeuring her kiddos around town, or planning her family’s next getaway.

She loves to hear from readers, so please drop her an email or send her a message on Facebook.