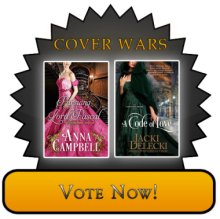 Cover Wars: Pursuing Lord Pascal VS A Code of Love + Win Both Books!

The winning cover for this Cover Wars event is Pursuing Lord Pascal by Anna Campbell!

Cover wars begins again. It's Pursuing Lord Pascal by Anna Campbell VS A Code of Love by Jacki Delecki. Vote for the cover you like the best!

Famous for her agricultural innovations, Amy, Lady Mowbray has never had a romantical thought in her life. Well, apart from her short-lived crush on London’s handsomest man, Lord Pascal, when she was a brainless 14-year-old. She even chose her late husband because he owned the best herd of beef cattle in England!

But fate steps in and waltzes this practical widow out of her rustic retreat into the glamour of the London season. When Pascal pursues her, all her adolescent fantasies come true. And those fantasies turn disturbingly adult when grown-up desire enters the equation. Amy plunges headlong into a reckless affair that promises pleasure beyond her wildest dreams – until she discovers that this glittering world hides damaging secrets and painful revelations set to break a country girl’s tender heart.

Gervaise Dacre, Lord Pascal needs to marry money to rescue his estate, devastated after a violent storm. He’s never much liked his reputation as London’s handsomest man, but it certainly comes in handy when the time arrives to seek a rich bride. Unfortunately, the current crop of debutantes bores him silly, and he finds himself praying for a sensible woman with a generous dowry.

When he meets Dashing Widow Amy Mowbray, it seems all his prayers have been answered. But his mercenary quest becomes dangerously complicated when he finds himself in thrall to the lovely widow. Soon he’s much more interested in passion than in pounds, shillings and pence. What happens if Amy discovers the sordid truth behind his whirlwind courtship? And if she does, will she see beyond his original, selfish motives to the ardent love that lies unspoken in his sinful heart?

A Code of Love - The Code Breakers Series, #1

Cord's passionate attraction for the indomitable Henrietta hasn't diminished in his four years abroad, but neither has Henrietta's memory of his libertine past. As England's new Director of Intelligence, Cord faces more peril protecting the Harcourt family of brilliant code breakers than he did as an undercover spy in Napoleonic France. Henrietta's brother, on a clandestine assignment in Paris, has vanished.

In pursuit of the missing brother, Henrietta and Cord become entangled in a web of international intrigue, danger, and white hot passion.

THE CODE BREAKER SERIES Men and women from the class of privilege and rank risk their lives to defend England against the treacherous designs of Napoleon. They confront disaster, scandal, and passion as they pursue their code of honor and love.