Tammie here along with author Mara Wells. Mara is a debut romance author with a super cute contemporary romance. Dog lovers are going to go all mushy for this book and it's heartwarming title.

Mara, please tell us about your debut novel and how the Fur Haven Dog series will be connected. What can we expect from book to book?

Cold Nose, Warm Heart features Caleb, a real estate developer with something to prove, and Riley, a building manager determined to save her grandmother’s beloved building from Caleb’s schemes. They should be enemies, but the attraction between then is undeniable. When Caleb rescues Riley’s poodle, LouLou, during a thunderstorm, he learns that there’s more to the neighborhood, and Riley, than meets the eye. Riley, with LouLou’s help of course, convinces him that his future isn’t in trying to reclaim the past but instead is with Riley and LouLou, living happily ever after in the dog park that they build together.

The Fur Haven Dog Park series centers around the dog park that Caleb and Riley create in Cold Nose, Warm Heart. Forthcoming novels involve Caleb’s brothers, Lance (Tail for Two) and Knox (Paws for Love), who come on board to help Caleb rebuild the family business and renovate Riley’s building. Each book is chock full of very good dogs, senior citizens with strong opinions, and kissing. Lots of kissing.

“Over here!” Caleb yelled, not sure where the voice was coming from, but hearing the pain in it and wanting to do anything in his power to make that pain stop. What could he say? Rescuing furry damsels in distress brought out his mushy side.

Through the sheets of rain, he spotted Riley limping along the sidewalk across the street from dog park. She didn’t look much better than LouLou had, hair flattened and plastered to her head, clothes sticking to her as though she’d taken a dunk in the ocean. And was she barefoot? All those shoes outside her front door, and she’d run out in the storm without so much as a flip-flop to protect her?

“You’re a pair, aren’t you?” He whispered to LouLou, waving frantically to get Riley’s attention. “Over here! Riley, I’ve got LouLou!”

Riley looked across the road, and he knew the moment she saw them. She collapsed to her knees, hands over her face, and a giant sob racked her body. So they’d be staying out in the rain a little longer. He crossed over and knelt beside her, the soaked poodle between them.

“It’s okay. She’s okay. You’re okay.” He sounded like an idiot. He knew it, but he kept saying stupid things anyway. “I’ve got her. She’s right here.”

Riley sucked in a big breath and looked up at him with her tilted eyes. “Thank you.” She held out her arms for LouLou. He shifted the dog’s weight to Riley’s hold, but LouLou curled her paw around his wrist, tight.

Riley’s chin sank. “I deserve that.”

“No, it happens.” Caleb didn’t know what he was talking about. What happened? Rain? Dogs running loose in the streets? “You didn’t do anything wrong.” He knew that part at least was right.

“I couldn’t find her.” She scrubbed at her face with the heels of her hands, eyes red and lids swollen from crying. “And now she’s hurt. What happened to her paw?”

“She’s fine, just a small piece of glass.” He pried LouLou’s paw off his wrist and handed the dog over, surprised at how giving her back felt like a loss. If he felt this attached after such a brief time with the dog, how bad must Riley have felt when she realized LouLou was missing? The impulse to make Riley feel better kept his assurances flowing. “Eliza patched her up, and she’ll be good as new in no time.”

“Thank you.” She buried her face in LouLou’s fur and stood, but as soon as she did, she lost her balance and keeled over with a squeak.

Caleb reached out to steady her. “What’s wrong?”

Riley closed her eyes and leaned heavily on him. “Think I stepped on something.”

Feeling a sense of déjà vu, he crouched to inspect the bottom of her foot, dark with dirt and specks of gravel stuck to it. “Looks like a bad bruise. Maybe from a rock.”

“Can you walk?” He levered her back to standing on her own.

“Of course.” One careful step forward. Then another. “Thanks for taking care of LouLou, but you don’t have to hang around.” She winced and took another step, face as white as the knuckles clutching her dog. “I’ve got it from here. No problem.”

It was painful to watch. Still, she’d said to back off, so he did. Until she stumbled, almost dropping the poodle, and a car horn blared at her for hogging up the road.

“This is ridiculous.” He scooped her up, exactly like he’d done with her dog. Unlike LouLou, she wasn’t grateful.

“Hey! What’re you doing?” Riley couldn’t bat at his chest because she was holding onto her dog, but she glared. “You can’t swoop in and take over everything.”

“Hang on tight. I’m taking you home.” Caleb clutched Riley and LouLou against his chest, her legs over his arm like in some damn rom-com movie, and strode back toward her condo. If he wasn’t mistaken, he could hear Eliza’s cackle following them, but he didn’t care. It felt good to save LouLou, and it felt even better to have Riley in his arms.

A poodle, a black lab and a Chihuahua walk into a dog park...

All Caleb Donovan has to do to redeem his family name is take a rundown Miami Beach apartment building and turn it into luxury condos. Easy, right?

Unfortunately, that would also turn the local dog park into a parking lot and the neighbors aren't having it. Caleb is faced with outright revolt, led by smart, beautiful building manager Riley Carson and her poodle, LouLou.

For Caleb, this project should have been a slam dunk. But even more challenging than the neighborhood resistance is the mutual attraction between him and Riley. It would be so much easier just to stay enemies.

Can Riley and her canine sidekick convince Caleb that what's best for business isn't always best for the heart?

Mara Wells loves stories, but especially stories with kissing. She lives in Hollywood, Florida with her family and two rescue dogs—a poodle-mix named Houdini Beauregarde, and Sheba Reba Rita Peanut, a chihuahua-mix. To find out more, you can sign up for her newsletter at marawellsauthor.com. 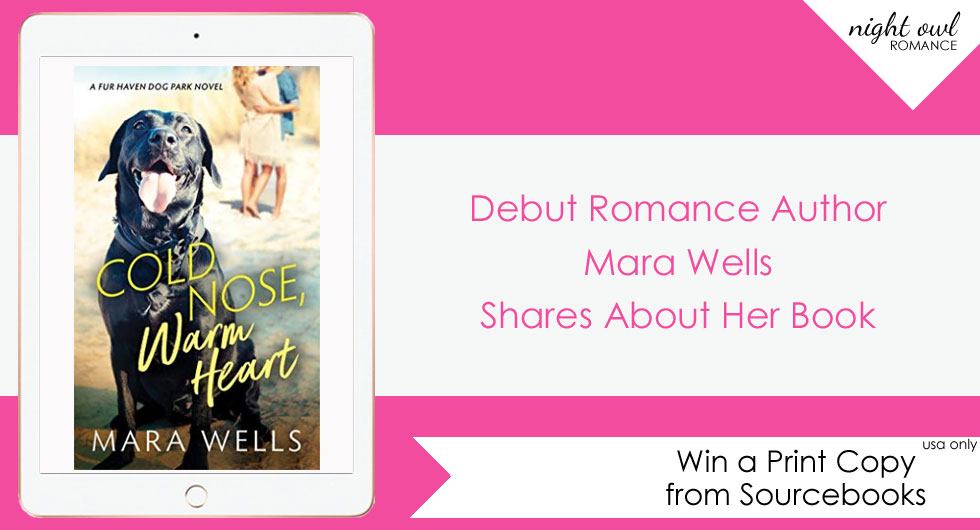