Murder on the Orient Express - Apples to Oranges

Long before I read the 1934 novel by Agatha Christie or seen the 2017 movie directed by Kenneth Branagh, I had heard about Murder on the Orient Express. The title is part of our popular culture and the story of a murder mystery upon a train has been told in countless ways. In this case, the Orient Express was a famous train route to fascinating places that very few people could afford to personally experience during the depression. Connect the romanticism of a long train ride to exotic locations with a mystery crafted by a wonderful storyteller and it almost guaranteed that Murder on the Orient Express would be a huge success.

Before you continue reading, please be warned that there will be spoilers in this article.

Which version did I enjoy best? Drum roll please…. The movie!

I truly can’t figure out why the recent movie wasn’t liked by more people. It’s worth viewing just for the spectacular exterior location shots and the interior shots of a historical passenger train. But what sealed my decision was the character development. There were over 10 suspects and a main cast of 17 characters. All of them got a moment to shine in the movie. All kinds of diversity were added to storyline, including changing characters to different ethnic and religious backgrounds which allowed overt and subtle racism to influence the investigation.

Another huge change was the ending. In the book, there was no doubt that Hercule Poirot was going to inform the authorities that a stranger had murdered Mr. Ratchett. The movie gave Hercule Poirot a moment of crisis. His self-worth and identity is around his ability to solve crimes but this was the first time where he had to be Judge, Jury and Executioner. Early in the film, the audience was shown that after solving cases, he would leave without knowing if the person was found guilty or not. That was not his job. His job was just to solve the crime. However, in Murder on the Orient Express, he knew that they were all guilty of a crime and it was his decision if he would tell the truth to the authorities. His decision to let them go was not a light decision, nor should it have been.

There are so many things to like about this movie; the updated dialogue, the extended battle of the wits scene between Mr. Poiret and Mr. Ratchett, Michelle Pfeiffer’s antics as Caroline Hubbard but my favorite addition was the importance of the mustache.

However, Agatha Christie deserves great praise for creating this story that has captured people’s attention for the last 84 years. What I appreciated the most was that she used it as an opportunity to re-write a story that was being played out in the news headlines. The famous Lindbergh kidnapping happened in 1932 where a child was kidnapped for ransom and then murdered. This headline gripped a nation because the death of an innocent child was so shocking. One of the benefits of being a writer is the ability to re-write a story with a happier ending. In this case, the baby didn’t survive but the positively guilty person suffered repercussions for his actions and the people, most affected by this tragedy, got the fictional cathartic experience of inflicting revenge against an evil person.

Next month I will be reviewing another recent release, A Wrinkle in Time. I read this book as a little girl and my inner child absolutely loves the film trailer. I have extremely high expectations. The movie will be released on March 9, 2018 and I will be seeing it opening weekend. Will you? 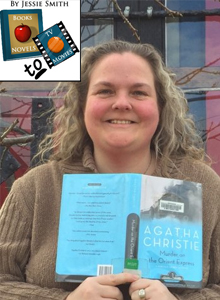