Get Your Swirl On! - Melting Pot

Yaaaasssss….I mean really..... why limit yourself to one dish when the world is a buffet? (Ha!)

This months Melting Pot selections are romances that feature an African-American / black female lead with a white male love interest. Though one is contemporary and the other is historical, both stories address the unique social complications of interracial dating head on. Check them out and let me know what you think.

Let me begin by saying that I aspire to achieve the level of snack preparedness that Alexa has clearly mastered in this story. (She practically produces a picnic from her purse, while she and Drew are stuck in the elevator together at the start of the story.)

The Wedding Date is quick read with well-developed lead characters and fun secondary characters. My only frustration was the feeling that a solid heart-to-heart conversation between the two leads would’ve diffused a lot of the conflict and misunderstandings throughout the story. Most romance readers frown upon such an easy fix and prefer more complexity in the reasons the two leads have difficulty coming together. However, the heat in their bedroom and the shear delight they have with each other more than makes up for the lack of strong conflict.

The Wedding Date by Jasmine Guillory

A groomsman and his last-minute guest are about to discover if a fake date can go the distance in this fun and flirty multicultural romance debut.

Agreeing to go to a wedding with a guy she gets stuck with in an elevator is something Alexa Monroe wouldn't normally do. But there's something about Drew Nichols that's too hard to resist.

On the eve of his ex's wedding festivities, Drew is minus a plus one. Until a power outage strands him with the perfect candidate for a fake girlfriend...

After Alexa and Drew have more fun than they ever thought possible, Drew has to fly back to Los Angeles and his job as a pediatric surgeon, and Alexa heads home to Berkeley, where she's the mayor's chief of staff. Too bad they can't stop thinking about the other...

They're just two high-powered professionals on a collision course toward the long distance dating disaster of the century--or closing the gap between what they think they need and what they truly want...

The stakes are high and the cause is great for both Elle Burns and Malcolm McCall who are both working as spies in Virginia for different pro-Union organizations. With an unflinching eye on history, Ms. Cole explores the struggles, dangers, and beauty of an interracial couple during this time in American history. There are definitely some heart pounding close calls and scenes that will make your blood boil with anger at the injustices depicted in some of the situations the characters must face. However, the ending is so rewarding you’ll be ready to reach for the second book in the series.

I purchased this book via Audible and listened to it during my daily walks. Let me tell you….there were days that my legs were SCREAMING at me to stop walking…I just had to hear what was going to happen next between Elle and Malcolm….so I kept on walking well past my step goal. In short, I HIGHLY recommend this story and I have already purchased book two.

An Extraordinary Union (The Loyal League) by Alyssa Cole

As the Civil War rages between the states, a courageous pair of spies plunge fearlessly into a maelstrom of ignorance, deceit, and danger, combining their unique skills to alter the course of history and break the chains of the past . . .

Elle Burns is a former slave with a passion for justice and an eidetic memory. Trading in her life of freedom in Massachusetts, she returns to the indignity of slavery in the South—to spy for the Union Army.

Malcolm McCall is a detective for Pinkerton's Secret Service. Subterfuge is his calling, but he’s facing his deadliest mission yet—risking his life to infiltrate a Rebel enclave in Virginia.

Two undercover agents who share a common cause—and an undeniable attraction—Malcolm and Elle join forces when they discover a plot that could turn the tide of the war in the Confederacy's favor. Caught in a tightening web of wartime intrigue, and fighting a fiery and forbidden love, Malcolm and Elle must make their boldest move to preserve the Union at any cost—even if it means losing each other … 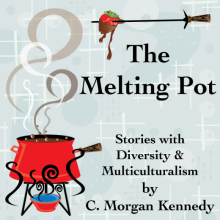