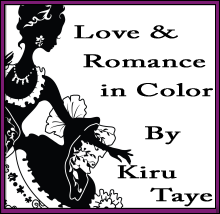 Welcome to August's Love and Romance in Color. This month we're celebrating all things African. Here are some fun facts.

First of all, I was born and bred in Nigeria although I currently live in the UK.

Africa is the second largest continent in the world. It has the world's largest desert, the Sahara—yep, the Sahara desert is larger than the US of A—and the longest river, the Nile.

A quarter of the world's languages are spoken in Africa with over 2000 languages spoken in the 54 independent countries on the continent by about 1 billion people.

Africa has cultures as rich and diverse as the continent is vast. In recent years, with the rise of new technologies more stories about Africa are being written and published. These include romance stories set in contemporary Africa as well as those celebrating out vibrant past.

If you've never read an African romance, here are a few to get you started.

CONTEST: This month, share or tweet this post, copy the link for where your shared/tweeted it and post if in a comment here. You'll be entered into a prize draw to win a $5 (Amazon or ARE) gift card. Each share or tweet is one entry. The winner will be announced in next month's issue of Love & Romance in Color. So get sharing and tweeting.

Love Through Time by Nana Prah

Defending her family – no problem. Recalling past lives –  maybe just a small problem. Taking a chance on love again – well…

Jasmine Gibson has her world turned upside down when she meets gorgeous Sean Taylor. He’s the first man she’s been attracted to since her fiancé dumped her two years ago. But when the disturbing daydreams start, Jasmine begins to fear that her actions in a past life may have finally caught up with her.

Sean finds it impossible to stay away from Jasmine even though he can’t shake the inexplicable feeling of betrayal simmering deep inside him every time he sees her.

To complicate things, someone is out to hurt Jasmine and every time she and Sean are together the police have to be called. Even if Jasmine can make Sean trust her, the two of them may not stay alive long enough to enjoy their love this time around

Closer Than A Brother by Nkem Ivara

Daye Thompson didn’t know when it happened, but while playing the role of the-big-brother-she-never-had to beautiful Samantha Egbuson, he falls in love with her. Confessing his true feelings could signal the end of their lifetime friendship. Can he risk losing her altogether?
She may have fallen for her best friend, Daye but can Samantha trust him with her heart when she's had such rotten luck with men she trusted in the past?

Most Eligible Bachelor by Empi Baryeh

Magazine columnist Chantelle Sah doesn’t celebrate Valentine’s Day—not since her fiancé’s betrayal three years ago. After botching her first assignment as a feature writer, she’s more than willing to put in a hard day’s work this Valentine’s Day; even if it means going on a date with gorgeous construction Tycoon, Lord McKenzie, and opening herself to an onslaught of all things love.

When Lord—his given name, not a title—sets his sights on Chantelle, it isn’t just work he has on his mind. But even he couldn’t have predicted the magnetic attraction between them when they meet, nor the evening ending with more than an interview. Now he has to convince Chantelle that their one-night stand wasn’t a mistake. Can he win her love without revealing a secret from their night of passion, which could prove fatal for both their hearts?

The Other Side by Zee Monodee

Divorce paints a scarlet letter on her back when she returns to the culture-driven society of Mauritius. This same spotlight shines as a beacon of hope for the man who never stopped loving her. Can the second time around be the right one for these former teenage sweethearts?

Indian-origin Lara Reddy left London after her husband dumps her for a more accommodating uterus—at least, that’s what his desertion feels like. Bumping into him and his pregnant new missus doesn’t help matters any, and she thus jumps on a prestigious job offer. The kicker? The job is in Mauritius, the homeland of her parents, and a society she ran away from over a decade earlier.

But once there, Lara has no escape. Not from the gossip, the contempt, the harassing matchmaking...and certainly not from the man she hoped never to meet again. The boy she’d loved and lost—white Mauritian native, Eric Marivaux.

Back when they were teens, Eric left her, and Lara vowed she’d never let herself be hurt again.

Today, they are both adults, and facing the same crossroads they’d stood at so many years earlier.

Lara now stands on the other side of Mauritian society. Will this be the impetus she needs to take a chance on Eric and love again?

Physically, Yours by Nnenna Emm

Personal trainer Anata has a perfect life; she is young, has a body to die for and an almost-realised dream to own Nigeria’s first women-only gym. So what if her mother is breathing marriage fumes down her only child's neck? She has all the time in the world! And she is in no hurry to kiss any more frogs.

That is until she meets banker Afam.
Tall, besuited and dark like coffee, he seems as unperturbed by her sharp tongue as he is unaware of his chiselled good looks. Anata simply must have him!

Their passions ignite under a flirtatious friendship, but Anata is all too aware of her own departure and the shadow of his very reluctant ex, Linda, looming over them. Will she feel the burn of rejection or fight to win Afam body and soul?

Always Yours by Somi Ekhasomhi

Sophie is young, beautiful, and runs her own magazine. She loves her life, her job, her friends, in fact, she has everything she wants. What she doesn't have, however, is the man she has been in love with for the past five years.

Michael once crushed her feelings, after taking her innocence. After all this time, she should have forgotten him, but she is still desperately in love with him.

The best way to get over someone is to see them again, or so they say. So when Sophie engineers a meeting with Michael, all she wants, is to finally be able to forget him, or so she tells herself.

But as soon as she sees him again, she realizes that she still wants him, and he seems delighted to see her again. Everything is going well, until he tells her that he is engaged, crushing her hopes again. Now she has to fall out of love with him, as difficult as that is, or give in to the temptation of loving him, even though he belongs to someone else.

A young woman’s first love walks back into her life at the worst time possible—she is about to start a family with another man. But when her dreams begin to crumble, which one will be there to help her pick up the pieces?

Seven years earlier, at university, Tessa Calitz wrote a letter to Ryan le Roux promising her undying love. As time passed, she forgot about that letter...but not Ryan, who clung to the hope that she would wait for him.

Such is not the case when he walks back into her life. Tessa is in a serious relationship, and is busy setting up her art gallery in Johannesburg. She has plans to start a family, and the arrival of Ryan into her life throws her for a spin.

He is the worst thing that could happen to her dream of stability and starting a family...or is he?

Because when her relationship and everything she clung to starts to crumble, Ryan is right beside her to inspire her to greater things.

But her obsession for having her own child pushes Ryan away when she falls in love with an orphaned HIV-positive baby.

What can Ryan do to make Tessa realize that being with him is what her heart has longed for all along?-