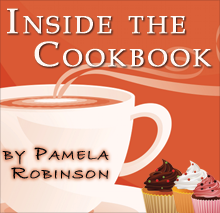 Wicked Good Barbecue - Inside The Cookbook

Wicked Good Barbecue is an interesting cookbook for the BBQ lover. I enjoyed reading about how the authors compete against others for best barbecue. Several of the recipes are worth trying at home, especially the fried macaroni and cheese.

A backstory behind the cookbook is always intriguing so I was glad to see one included here.

I do wish the font was a bit bigger. My husband mentioned that maybe we weren't the target audience since we don't have young eyes, but I’d have to disagree. It’s the middle aged folks that barbecue the most. 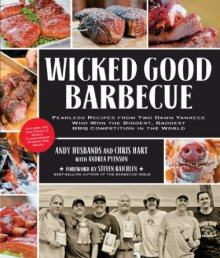 I liked the pictures that were included in this book, but I would have liked more. I always wonder how someone decides that one recipe needs a picture while another doesn't.

The tips and ideas were wonderful and I recommend this cookbook to all who like a good backyard get together with grilled meat and fun conversation.

This review is also included in the review section of the site.

Fearless Recipes from Two Damn Yankees Who Have Won the Biggest, Baddest BBQ Competition in the World

"A lot of serious barbecue champions have been waiting to see what secrets would be revealed in Chris and Andy’s book, and they are not going to be disappointed! These guys are both finely tuned chefs and hardcore pitmasters, a rare combination, and they’ve shared it all. I now understand how they won the world championship. The barbecue cookbook bar has just been raised." —Ray Lampe, Dr. BBQ, author of Ribs, Chops, Steaks, and Wings

"If there were ever a book that personified the ethos of the chef and brings it right into your kitchen, it is Wicked Good Barbecue. The audacious and tasty recipes showcase everything from the modern classics to serious in-your face-barbeque. Wicked Good Barbecue is a must for every grill aficionado." —Chris Schlesinger, coauthor of Thrill of the Grill and owner of East Coast Grill & Raw Bar in Cambridge, MA

How did two guys from Boston win hundreds of barbecue ribbons, thirty Kansas City Barbecue Society championships, and the biggest prize of them all, the Jack Daniel's World Championship Invitational Barbecue? By standing over glowing coals and smoking barrels for days on end to develop barbecue recipes not just good, but "wicked good" as they say in New England.

Award-winning chefs Andy Husbands and Chris Hart reveal their secrets to competition-winning barbecue—from the actual recipe that won the Jack Daniel's World Championship Invitational, to the 25-Step Championship Chicken that melts in your mouth and the American Royal First Place Beef Brisket, king of them all, hardest to master and unforgettable to eat when it's done right.

Wicked Good Barbecue ain’t your daddy’s barbecue. It’s just the best you’ve ever tasted. So if you want to cook competition-worthy chow, and you think you've got what it takes or want inspiration from the best; crack this book, pick up your tongs, and fire away. Wicked Good Barbecue is your guide to fun, fearless, and fantastic barbecue no matter where you're from.