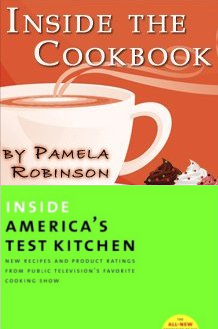 Inside America's Test Kitchen - Inside the Cookbook - 4 Stars

"America's Test Kitchen" is an awesome television show. I love how they attempt different ideas and recipes and show the step-by-step process. This book is unlike any other cookbook I've read before. Think "Consumer Reports" meets cookbook. Several different kitchen items are rated and reviewed in this book. It is interesting to find out which spatula works the best and which red wine vinegar tastes best. I love the tip about spraying a grater before shredding cheese so it doesn't stick. There is great information about how to shuck an oyster and steam a clam.

The print in this book is small, keep in mind that my eyes aren't great anymore, but I don't think I'm the only one. I wish they would have included more pictures. The color pictures they did have were bunched together and not by the recipes at all. An index is included and they did have black-and-white pictures from the television show.

This is a hardback book and I expected a little better quality in the format. All in all, I would say this is a great review book with a few recipes included. Interesting for all ages.