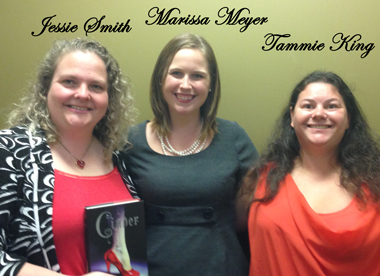 Thanks for joining us (Tammie King & Jessie Smith) today and answering some questions for us.

First off, what's your latest book and what inspired it?

My most recent release is CRESS, the third book of the Lunar Chronicles, which re-envisions the fairy-tale princess Rapunzel as a talented computer hacker being forced to work for an evil queen. Rather than being trapped in the traditional tower, Cress is imprisoned in a satellite orbiting around Earth. She determines that her best chance of escape lies with the title characters of the first two books (Cinder / Cinderella and Scarlet / Little Red Riding Hood), but nothing ever goes as planned.

I had the idea for The Lunar Chronicles many years ago after writing a science-fiction retelling of “Puss in Boots” for a writing contest, and I thought it would be fun to write an entire series of futuristic fairy tales. As I was brainstorming different twists I could give to these classic stories, the idea of Rapunzel being trapped in a satellite rather than a tower popped into my head, and the concept was too fun to pass up.

How's it feel to be part of the Fierce Reads tour?

This is my fourth Fierce Reads tour, and I always have such a great time. Not only do you get to meet a lot of amazing, enthusiastic readers, but it’s also a treat to spend time with other authors and “talk shop” with each other. Writing can be a very solitary occupation, and it’s nice to remind that there are other people out there sharing in your creative struggles and career concerns! Though we may not know each other at the start of tour, we’ve always bonded by the end of it.

Was your original intent always to start the Lunar Chronicles series with your version of Cinderella? If yes, why? What appealed to you about retelling this particular fairytale character?

Not necessarily – when I first started throwing ideas around, Cinderella was on the list of potential fairy tales to include, but I wasn’t yet sure that it would make the cut. I was really waiting to see which fairy tales rose to the top, as far as which stories I felt that I had the best ideas for, or stories that I could begin to develop into one continuous storyline. But then one night I had a dream in which Cinderella, running from the prince’s ball, lost her whole foot instead of a slipper. When I woke up, I immediately had this idea of Cinderella being a cyborg, and I fell in love with the idea. From there, Cinder and her story became the centerpiece on which I could start tying together all these other ideas that I’d been brainstorming. (Such as Rapunzel in a satellite!)

What reincarnations of Cinderella, from television, big screen, or novel are your favorites?

I really love Ella from “Ella Enchanted” by Gail Carson Levine. Even though I’ve been infatuated with fairy tales since I was a kid, I find myself bored with protagonists who cardboard cutouts of “Any Princess” or “Any Prince.” I loved that Ella was strong-willed, politically-minded, and intelligent. Together, she and the prince earned their happily ever after.

I (Jessie) got the opportunity to attend your 2012 San Diego Comic Con panel where you delighted your fans by wearing a Red Riding Hood cape, which helped to promote your novel, Scarlet. What has been your favorite thing that you have been able to do to promote/market your series?

Cosplay is always a highlight! (When I cosplayed as a teenager, I never thought I could someday wear a costume while on an author panel, promoting my own books – talk about a dream come true!)

I have to say, though, that running creativity contests with my fans has been one of my favorite promotional tasks. I’ve asked readers to design the flags of my futuristic Earthen countries, the seal of the Lunar people, Pinterest boards, and, most recently, stickers! I now have three fantastic sticker designs that I can hand out at book signings. Readers are so talented and I love seeing all the wonderful things they come up with.

From the other side, what interesting things have your fans done, at your author events, to show their appreciation? Costumes? Fan art? Tattoos?

I haven’t had any tattoos (yet!), but I see a fair amount of costumes and get TONS of fanart. (It’s the best!!) There was a group of four girls during the Cress tour that came dressed up as the four main girls, and they all had these great props—Scarlet was holding a can of tomatoes, Winter had her box of candies. It was so much fun to see!

When was the moment that you realized your book Cinder was a huge success and that you would be able to continue your Lunar Chronicles?

I was really lucky that the books sold as a four-book series, and that my publisher Macmillan has been 100% behind them from day one. So while I’d had nothing but hope and optimism before, once we had a book deal I knew that all four books were some day going to exist in the world. It was equal parts relief and panic, ha! But I don’t know if there was a moment when I thought, “Hey, wow, the books are getting really big now. That’s kind of crazy.” I guess I still feel like that, every day. I think its fun now seeing all the connections between people in my real life—say, my uncle will go to a party and meet someone who has a teenage daughter who’s a fan, etc. Stories like that are happening more and more, and it’s very cool. And weird. It never stops being weird.