Escape Publishing is pleased to announce three titles in a fun, flirty, footy series featuring the strong athletic heroines of the Women of AFL.

Set in the fictional Women's Aussie Rules (W.A.R.) League, Women of W.A.R. follows three female footy players as they break down barriers, learning to live and love in the big leagues.

Today we have each leading W.A.R lady here to share their bio.

Hi I’m Darcy Clarke from Fair Game and I play for the Brisbane Banshees. I’m 27 years old and, believe it or not, for many years my goal involved tutus and ballet shoes instead of footballs and cleats. That’s why I’m really good at taking marks – all those years of grand jetes primed me well for leaping into the air – and why they called me Dancer.

When I’m not training and playing for the Banshees, I work at a garden centre. There’s nothing like working outdoors and getting your hands in the dirt, I always say. It’s also quite a physical job so it helps to keep me in shape for the footy field. My mother, who’s a florist, isn’t one for getting her hands dirty much. Neither of my parents really understand why I want to play professional Australian Rules football. I was their little ballerina and now I’m running around a field kicking a ball getting all grassy and sweaty. But this is my life and only I can live it.

My favourite food is vegemite and cheese toasties. My flat mate, Levi, makes the best toasties and we hang out together on our enormous couch and watch Netflix. And that’s not Netflix and chill, okay? It’s notcode for anything. Because…well….it’s Levi….and whilst he is sexy and buff and did I mention a part time yoga instructor (yeah, it’s okay you can go there but I try not to), it’s Levi and that would be wrong….Right?

He’s loved her forever from afar, but their relationship is about to get very up close and personal…

Darcy Clarke would do anything to play for the new Women’s Aussie Rules league, even put up with her ex, Tony, who just happens to be the coach of the Brisbane Banshees. Tony stomped out of their apartment – and all over heart – two years ago, but she’s moved on, and she deserves her jersey.

As his best friend’s girl, Darcy has always been out of Levi’s reach, even after Tony dropped her and moved out of the apartment they all shared. Now, two years on and still sharing the same apartment, she should be fair game. But Levi is no closer to getting Darcy to think of him as anything but a roommate and a friend.

But when Darcy injures herself in play, Levi’s qualifications as a sports massage therapist become essential to her recovery. Suddenly, their relationship becomes very hands on, and Darcy sees a whole new side of her old friend. She would love to take their physical attraction further, but Levi seems immune to her charms. When Tony makes it clear he wants back into her life, she has a decision to make: between the man she once loved and the man who never left her side.

Each book is a standalone romance novel, celebrating the amazing achievements of female athletes as they move forward in their fields – and making a little time for love as well.

Cress Kennedy From The Long Game

G’day, Cress Kennedy here, from Long Game. I’m an Aussie, off a farm near the town of Grong Grong, NSW, Australia. Go on, laugh at my town, it’s cool, I’m used to it. I’ve grown up on the farm with Dad and my four brothers—Tristan (Tris), Oliver (Ollie), Gareth (Gar) and Damon (Damo). Mum died when I was a baby so I’ve grown up pretty tough and wild, but don’t worry, I scrub up okay when I have to.

The greatest thing is that I’ve been selected to play in the new Women’s Aussie Rules (WAR) competition. Aussie Rules and farming are my passions, and although I have to go to Sydney and miss harvest, my favourite time of year, I’m going to give it my everything.

Tris’s best mate, Quin, is down in Sydney and I’m staying with him. Everyone thinks he’s my fifth brother, and I seriously have to keep reminding myself of that because he’s hot and my thoughts about him aren’t always brotherly.

Anyway, WAR comes first. Then I’ll be back on the farm, so Quin will just have to remain my unfulfilled fantasy. You know how much fun they can be, right?

I hope to see you in the pages of Long Game. I promise I won’t go on with too much footy talk.

Can all her dreams come true?

Quin Fitzpatrick left Grong Grong as an eighteen-year-old to play Aussie Rules in Sydney, but after eight years the shine has gone from the lifestyle. When his best friend’s little sister follows in his country-to-city footsteps, he promises to look after her. She can stay with him and he’ll protect her as best he can. Besides, Watercress is the little sister he never had.

But Cress is all grown up now and playing Women’s Aussie Rules, and it’s about time that Quin sees her as a woman too…

Angelica Bryant From Game On

Hi, I’m Angelica Bryant, but my friends call me Angie.

Unless you happen to be Jaxon Flint, the most annoying, charismatic man on the planet—who also happens to be my boss who I accidentally slept with—and you call me Angel.

There’s nothing angelic about me. I can’t let anyone see my softer side, not when I’m trying to cement my place as the best midfielder for the Melbourne Muses in the Women’s Aussie Rules comp. I aim to kick ass in every footy game I play.

My dad’s a world famous soccer player and working at his bar The Scissor Kick pays my bills. Until I land a job as a junior sports agent at Jaxon’s talent management company…that’s when my life really gets complicated.

I like Pilates, body balance classes, ten kilometer runs along the Yarra and ice cream. The kind that comes in a tub, not just the euphemism Jaxon uses it for.

I don’t like condescension from people who don’t rate women footballers, concussions that keep me out of a game and the way Jaxon makes me feel.

And I’m always, always, up for a challenge, whether it be on or off the footy field.

Are they playing to win…or playing for keeps?

Angelica Bryant has a dream. The only child of a soccer legend, she pays her bills by working at her father’s bar while pursuing her goals: a role in sports management and a place in the newly established Women’s Aussie Rules league. Football is her passion, and she won’t let anything get in her way: including an ill-advised one-night-stand with one of Australia’s most successful agents.

Jaxon Flint thrives on success. His workaholic lifestyle keeps his agency and the athletes he represents at the top of their game – and all of his emotions at bay. Until he meets Angie, W.A.R.’s newest star, who undermines his carefully laid plans and gets under his skin. Is he willing to relinquish his careful control both in and out of the bedroom? 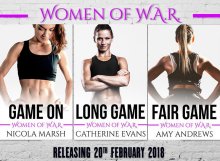