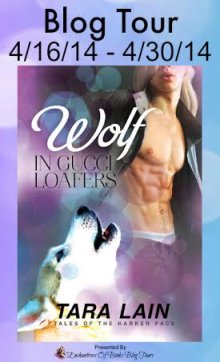 Join us for Tara's tour!

Socialite Lindsey Vanessen wants someone to love who will love him back — an impossibility for a gay, half-human, half-werewolf. Too aggressive for humans, too gay for wolves, and needing to protect the pack from human discovery, Lindsey tries to content himself with life as a successful businessman. But when someone starts kidnapping members of wealthy families, Lindsey meets tough cop Seth Zakowsy—the hunky embodiment of everything Lindsey wants but can't have.

Seth has never been attracted to flamboyant men. What would the guys in the department think of Lindsey? But intrigue turns to lust when he discovers Lindsey’s biting, snarling passion more than matches his dominant side. It might mean a chance at love for a cop in black leather and a wolf in Gucci loafers.

Lindsey came up beside him. “So, let me look at you.” The guy stood back and regarded Seth up and down like a piece of prime beef. “Yes, well, lovely, but maybe a little casual for the occasion. I know it sounds like an athletic event, but really it’s more”—he waved a hand gracefully—“shall we say, social?” He walked around Seth, making a “hmmm” sound.

“Look, I don’t care about the social niceties. I just want to catch a fucking kidnapper.”

“Ah yes, yes, but we catch more flies with—Armani.” He laughed. “Come with me.”

Lindsey threw open a door, and Seth walked in behind him. “Holy shit.”

Lindsey turned and placed a hand on his chest. “Yes, dear, I know. Decadent. It may be the sign of a devolving civilization, but this is my closet.”

This was a room his family home could fit in twice. “Department stores don’t have this many clothes.”

“Dear, dear. We never shop at department stores.” He waved a hand down his body. “Obviously, nothing that fits me is going to fit you.” He touched the epaulet on the leather jacket. “Those shoulders. Oh my.” He sighed. “Anyway, I happen to have a blazer that was delivered to me in the wrong size. My guess is that it’s divine plan, because I think it will fit you perfectly.” He walked to the racks of clothing and pulled out  a deep-green blazer.

Seth touched the material. Butter. Shit, not his style. He shook his head. “I don’t need this. Thanks, though.”

Lindsey hooked the jacket on a display hanger and crossed his arms. “Listen, dear. You asked me to take you to this event. I’m also very interested in you capturing these horrible people. After all, their victims are my friends. So do this my way.” He pointed at the coat. “That jacket cost half your annual salary. No one is going to smell cop when I get through with you. They’ll talk to you because you’re a friend of mine and that’s all they need to know. Understand?”

Seth frowned. “What do I say when they ask what I do?”

“You work for the government in a classified capacity. End of story. You could tell them, but—”

“I’d have to kill them.” He cracked half a grin. “That’s pretty ingenious.”

Tara Lain writes the Beautiful Boys of Romance in LGBT erotic romance novels that star her unique, charismatic heroes. Her first novel was published in January of 2011 and she’s now somewhere around book 21. Her best-selling novels have garnered awards for Best Series, Best Contemporary Romance, Best Ménage, Best LGBT Romance, Best Gay Characters, and Tara has been named Best Writer of the Year in the LRC Awards. In her other job, Tara owns an advertising and public relations firm. She often does workshops on both author promotion and writing craft. She lives with her soul-mate husband and her soul-mate dog in Laguna Beach, California, a pretty seaside town where she sets a lot of her books. Passionate about diversity, justice, and new experiences, Tara says on her tombstone it will say “Yes”!