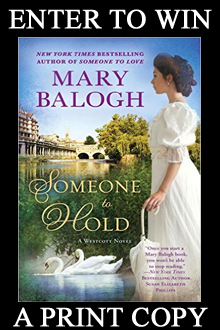 Win a Print of Someone to Hold by Mary Balogh

One lucky reader will get shipped a copy of "Someone to Hold" - A Westcott Novel, #2.

Someone to Hold - A Westcott Novel, #2

A reversal of fortune befalls a young woman in the latest Westcott novel from the New York Times bestselling author of Only a Kiss and Someone to Love.

Humphrey Wescott, Earl of Riverdale, has died, leaving behind a fortune and a scandalous secret that will forever alter the lives of his family—sending one daughter on a journey of self-discovery...

With her parents’ marriage declared bigamous, Camille Westcott is now illegitimate and without a title. Looking to eschew the trappings of her old life, she leaves London to teach at the Bath orphanage where her newly discovered half-sister lived. But even as she settles in, she must sit for a portrait commissioned by her grandmother and endure an artist who riles her every nerve.

An art teacher at the orphanage that was once his home, Joel Cunningham has been hired to paint the portrait of the haughty new teacher. But as Camille poses for Joel, their mutual contempt soon turns to desire. And it is only the bond between them that will allow them to weather the rough storm that lies ahead...

Book one "Someone To Love" was highly acclaimed here on Night Owl Reviews with a 5 Star / Top Pick review from Terri.

You can get a copy of book one below while you get entered to win book two. Book two releases in early Feb 2017.

Someone To Love - A Westcott Novel, #1

The New York Times bestselling author of Only a Kiss launches a new series with the death of an earl and the revelation of a scandalous secret...

Humphrey Westcott, Earl of Riverdale, has died, leaving behind a fortune that will forever alter the lives of everyone in his family—including the daughter no one knew he had...

Anna Snow grew up in an orphanage in Bath knowing nothing of the family she came from. Now she discovers that the late Earl of Riverdale was her father and that she has inherited his fortune. She is also overjoyed to learn she has siblings. However, they want nothing to do with her or her attempts to share her new wealth. But the new earl’s guardian is interested in Anna…

Avery Archer, Duke of Netherby, keeps others at a distance. Yet something prompts him to aid Anna in her transition from orphan to lady. As London society and her newfound relatives threaten to overwhelm Anna, Avery steps in to rescue her and finds himself vulnerable to feelings and desires he has hidden so well and for so long.

Mary Balogh is the New York Times bestselling author of the acclaimed Slightly novels: Slightly Married, Slightly Wicked, Slightly Scandalous, Slightly Tempted, Slightly Sinful, and Slightly Dangerous, as well as the romances No Man's Mistress, More than a Mistress, and One Night for Love. She is also the author of Simply Love, Simply Unforgettable, Simply Magic, and Simply Perfect, her dazzling quartet of novels set at Miss Martin's School for Girls. A former teacher herself, she grew up in Wales and now lives in Canada.