How to Plan Out a Paranormal Romance Series by Kait Ballenger, Author of Wicked Cowboy Wolf

Tammie here today with guest author Kait Ballenger. Kait has some awesome paranormal romance novels on bookshelves and more coming in the future. I wanted to know how Kait has gone about planning such a successful paranormal romance series... and she just had to laugh. So without further ado, lets laugh along with Kait.

I have a confession to make: when my publicist told me the topic of this post, I laughed. Don’t get me wrong! I think it’s an amazing topic and considering I am currently writing a hot paranormal romance series about sexy cowboys who are ranchers by day, wolf shifters by night, which is not only successful, but will also be long running (there’s 3 books out currently with 3 more contracted and on the way!), the topic makes total sense. But it was the word “plan” that had me laughing so hard I was in tears.

Friends and family would tell you I rarely “plan” anything. Sure, I have a planner which I use religiously to keep track of everything I need to get done and all my appointments, mainly because I won’t remember otherwise. I set goals and try to meet them, but when it comes to planning what’s happening in my books…HA! My characters are always two steps ahead of me and I just can’t seem to make them behave. Couple that with the fact that I’m a master level procrastinator—like skin of your teeth, writing until 3AM to make your deadline level procrastination—and when it comes to my creative work, I don’t plan much and what I do plan often goes the way of the dodo.

This one I should have known to do. Keeping series details consistent is key! In fact, my agent told me to do this at the start. However, my mistake was assuming that I could do this easily with a simple word doc containing some of the series world details. Boy, was I wrong lol. All of you readers who have enjoyed a long-running paranormal series before and know how many details overlap in each book are laughing at me right now; I’m sure of it. My sparse Word doc technique may have worked while writing Book 1 or even Book 2 in the series, but by Book 3 I was straining to remember threads from the earlier books and by Book 4, all bets were off. I needed a series bible to remind me of all the rules I’d created for my paranormal universe (or like in the Seven Range Shifter series, the rules of the adjacent paranormal universe—The Grey Wolf pack lives in modern day Montana, you just don’t know about them because they hide in plain sight).

Fortunately for me, I have a husband who is a research librarian and very skilled at cataloguing data, so whilst I was in the middle of writing Wicked Cowboy Wolf, book 3 in the series and my latest release, he went back through and catalogued all those pesky details like the middle name of the hero’s cousin twice removed who now has a starring role as a secondary character. Not really…I didn’t actually need that particular detail, but you get my point.

Did you know that I said the Grey Wolves’ calving operation is exactly X number of acres and they have X amount of cattle on page X of book 1, Cowboy Wolf Trouble? Of course you didn’t, and neither did I  ?? But it’s in my series bible.

2. Allow secondary characters to do as they please (sometimes it pays off)

If you write a paranormal romance series where each book is about a different couple like the Seven Range Shifter series, you’ll be asked to “hero-seed” characters. This means subtly hinting at who will be the next hero of the series, so readers can get excited about the book.

I did have at least one plan when I started the Seven Range Shifter series…that the series’ heroes for the first three books would be ordered as follows: Wes, Maverick, Colt.

If you’re a reader of the series, you’re chuckling right now, because you know the series order actually goes like this: Wes, Colt, Rogue (he’s the hero in my newest release, Wicked Cowboy Wolf).

Characters ruin best laid plans. When I was writing Cowboy in Wolf’s Clothing, book 2 in the series, over 250 pages in a character known only as “The Rogue” showed up on the page for the first time ever. He was a mysterious criminal rogue wolf, imprisoned in the cells of a vampire coven.

As soon as Rogue came onto the page with his dark, smoldering stare and persuasive ways, I knew my best laid plans were doomed. He was SO charismatic as a character, so fully-formed, and alive that I knew that wasn’t the last I’d see of him despite all my carefully laid plans—and it wasn’t.

He’s the hero of Book 3, Wicked Cowboy Wolf, my newest release, only because he was so demanding about having a book of his own and so thoroughly wanted his side of the story told, (despite that we initially think he’s a villain).

Did I mention his heroine is the younger sister of his sworn enemy, the Grey Wolf packmaster?

There’s far more to the Rogue than we initially think…

So if you like reading about mistaken identities, first loves which span decades, sexy smoldering antiheroes, and characters who champion the underdog, Wicked Cowboy Wolf may be the book for you.

*Don’t worry if you haven’t read the earlier books. You can pick up the books at any point in the series*

Readers don’t need to know every detail in Book 1. They only need to know the details which are important to each individual story/book, which is great news, because that means you don’t have to know all the details either! I certainly didn’t lol. As a writer, as long as you remain consistent, it’s your world, your rules. So if you’re not contradicting earlier worldbuilding you’ve established, anything goes. It’s for this reason that I promise my readers can always expect to be learning new and intriguing information about the Grey Wolf pack and all the seven shifter clans which call the Montana mountains home with each and every book.

So here’s to the pansters, who create as they go, who if they stumble, make it part of the dance, because if I’ve learned one thing through writing the Seven Range Shifter series, it’s that the best things in life aren’t always planned.

"With action, tension, and heat...hits all the sweet spots of paranormal romance. Recommend to readers of Nalini Singh and Maria Vale."?Booklist for Cowboy in Wolf's Clothing

To his enemies, he's known as the Rogue. To her, he's her only chance at survival...

Years ago, Grey Wolf Jared Black was cast from the pack for a crime he didn't commit. Now, he's the mysterious criminal wolf known only as the Rogue, a name his former packmates won't soon forget. But when a vampire threat endangers the lives of their entire species, Jared must confront his former packmates again, even if that means betraying the only woman he's ever loved...

Ever since Maeve Gray escaped the pack's bloodsucking enemies, she's been determined to save her species?and fast. Each passing day risks the lives of her friends and family. But when a wicked cowboy wolf shows up on the Grey Wolf ranch, offering everything Maeve's heart desires, her eyes are opened to a whole new world beyond the packlands. For this cowgirl, sleeping with the enemy could prove as desirable as it is deadly...

Kait Ballenger earned her B.A in English from Stetson University followed by an M.F.A in Writing from Spalding University. After stints in multiple careers, Kait finally decided that her eight-year-old self knew best: that she was meant to be a writer. Kait lives with her husband and young son in Florida. 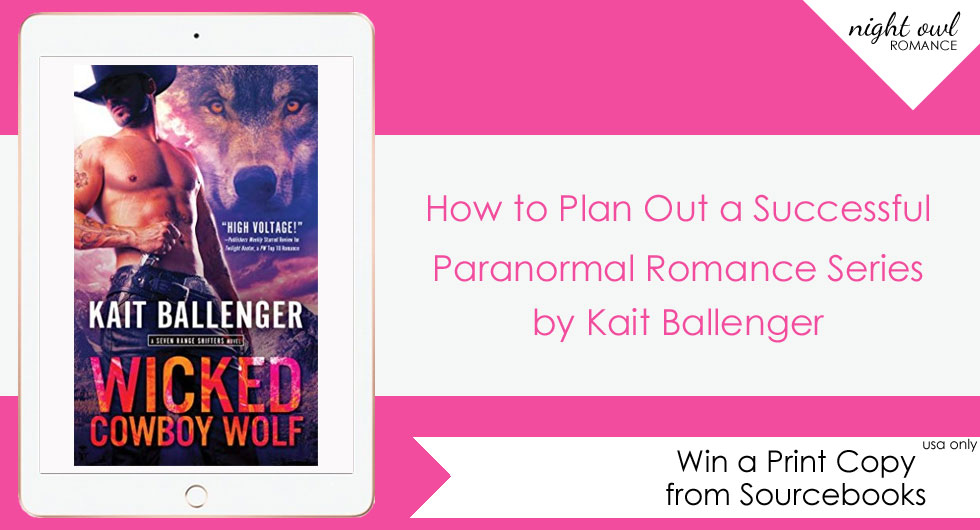