Tammie here along with author Adriana Anders. I asked Adriana to share about the location of her book, Whiteout.

Adriana, what’s life like in Antarctica and how does this apply to your story?

I love this question, because while researching and writing WHITEOUT, I absolutely fell in love with Antarctica.

First of all, it’s important to know a few things about the South Pole and surrounding areas:

Which leads me to one of the things that I think I’d really love there: the tight-knit Poley community.

I created my own research station for Whiteout, which enabled me to invent things that I needed for my story, but it’s pretty much based on Amundsen-Scott South Pole Station.

I was lucky enough to chat with a couple people who lived and worked at the Pole and they gave me some great perspective. Poleys—and specifically Winterovers (those who remain throughout the polar winter)—are not like other people. You have to be strong—physically and mentally—to survive a winter at Pole. It doesn’t just get cold, it gets FREEZING COLD. The coldest temperature recorded at the South Pole was −117.0 °F (yes, that’s a minus) and the coldest temp on earth was −128.6 °F at Vostok station, 800 miles away. It truly is the land of the midnight sun. For half the year, the sun doesn’t ever hit the sky. There’s even a syndrome named for the effects of those long, dark months: Winter-over syndrome. It can make people depressed, irritable, aggressive… Not fun, right? But think about the close-knit community formed in a situation like that. That appeals to me. Like folks who serve in the military, or people who work on oil rigs, Poleys develop close, special relationships and often have difficulty returning to “reality” after life at Pole.

WHITEOUT sets you inside the South Pole Station just before the onset of winter. There’s still constant daylight, the sun’s still bouncing around in the sky, the temperatures are still bearable (barely), and the good folks who work there in the summer are just about to leave. That’s when things fall apart.

When the station is deserted, Angel Smith, the station’s chef, and annoyingly handsome glaciologist Ford Cooper, are forced to flee for their lives—together. In the wildest, deadliest, coldest place on the entire planet, these two not-quite-enemy opposites have to team up in order to survive against the elements, and the baddies who are after them. I’m super excited for people to read this book, which I packed full of suspense, adventure, deep, deep feels, and a mystery that spans the full Survival Instincts series. And, bonus: readers get a little perspective into life at the South Pole!

With a storm coming and a killer on the loose,

every step could be their last...

Angel Smith is finally ready to leave Antarctica for a second chance at life. But on what was meant to be her final day, the remote research station she's been calling home is attacked. Hunted and scared, she and irritatingly gorgeous glaciologist Ford Cooper barely make it out with their lives...only to realize that in a place this remote, there's nowhere left to run.

Isolated with no power, no way to contact the outside world, and a madman on their heels, Angel and Ford must fight to survive in the most inhospitable—and beautiful—place on earth. But what starts as a partnership born of necessity quickly turns into an urgent connection that burns bright and hot. They both know there's little chance of making it out alive, and yet they are determined to weather the coming storm—no matter the cost.

Adriana Anders is the award-winning author of the Blank Canvas series. Under Her Skin, a Publishers Weekly Best Book of 2017 and winner of two 2018 Holt Medallions, has been featured in Bustle, USA Today Happy Ever After, and Book Riot. Today, she resides with her tall French husband and two small children in France, where she writes the gritty, emotional love stories of her heart. 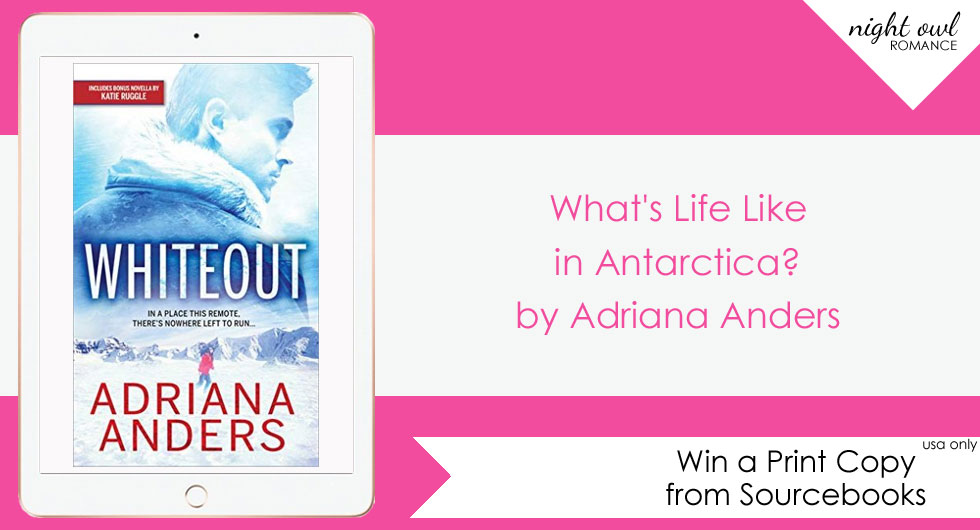