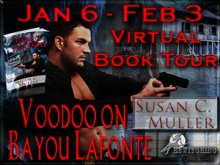 Susan C. Muller stops over to share the third in her Occult series. 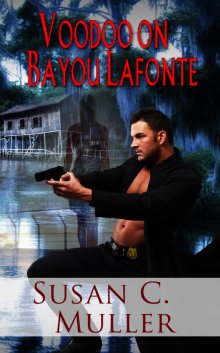 A frantic phone call leads Detective Remy Steinberg racing through the night toward the one place he vowed never to return. With the life of his kidnapped daughter at stake, he willingly faces shotgun-wielding drug dealers, corrupt law-enforcement officials, and a raging hurricane.

Scouring the seedy back alleys of New Orleans for information, he goes undercover at a sinister voodoo ceremony, and struggles to understand the forces of black magic that hold his daughter hostage.

With time ticking down, he battles for his life against a high voodoo priest, but can he face the two things he fears most: the swamp that terrorized his childhood, and the ex-wife he’s never stopped loving?

Detective Remy Steinberg must return to Louisiana in search of his kidnapped daughter. Can he save her before the swamp swallows her up and he loses any chance at happiness?

Remy’s heart barely had time to slow down before they coasted into the driveway of the next friend on Adrienne’s phone-list. He shot a quick peek at Gabby as she chewed on her bottom lip. What was she so nervous about, Adrienne or something else?

As if reading his mind, Gabby gave a tiny shrug. “Claudine’s stepfather is kind of a jerk, so be careful. I get the feeling he’s not around much so hopefully he won’t be home.”

Remy dealt with jerks every day. He even worked with some. Gabby probably thought a cross word meant the end of the world. Sometimes being sweet could be a disadvantage. He didn’t have that problem.

Claudine was outside, climbing into a blue Honda. Gabby spoke up before the girl had time to shut her car door. “Hi, Claudine. This is Mr. Steinberg, Adrienne’s father. He wants to ask you some questions about Adrienne’s disappearance.

Claudine started fidgeting with her car keys. “I wouldn’t know anything about that.”

Every damn time. People either outright lied or omitted things they didn’t want to talk about. Did they think he was a fool? He could read body language faster than most people could read a book.

The teen tried to close the car door, she wasn’t getting away that easy. He leaned down when he heard someone shout.

“Hey! What are you doing?” A big guy wearing cut-off jeans, flip-flops, and a thick covering of body hair leaned out the door of the house. “Get away from her before I call the police.”

“I said, ‘Back away.’” Cryer grabbed a shotgun from behind the front door and started across the lawn. “I don’t care who you are or what happened to your whore of a daughter. Get you hand off the car and your butt off my property or I’ll blow your balls off.”

Remy’s ears roared as blood rushed to his head. Now wasn’t the time. Finding Adrienne had to be his priority. But Cryer’s time would come. He promised himself that.

He put out his hands and twisted toward the man. “There’s no need to use that kind of language in front of these women. We were just asking Claudine for her help.”

The idiot took another step his direction and leveled the shotgun at his chest. “And I said, ‘Get the fuck out of here.’”

Remy mentally counted to ten. He sure didn’t want to have to shoot the guy, not in front of his stepdaughter, or Gabby.

Heart pounding, he kept walking toward Cryer, his hands at his shoulders, palms out. He wasn’t the frightened little pipsqueak he’d been at eleven. “Come on, man. Her mother’s in a state about this. We won’t be but another minute.”

“You’re fucking right about that, asshole.”

Dan adjusted his grip on the shotgun as Remy slapped the barrel aside. In two moves, the big man was facedown on the ground with Remy’s knee in his back.

Remy leaned forward and whispered in his ear, “Ferme ta gueule, merde embulante. If you ever pull a weapon again on me or mine, I’ll stick it so far up your ass the coroner won’t be able to identify the pieces.” He kept his knee against Dan’s back as he unloaded the shotgun, tossing the shells in one direction and flinging the gun into a bed of azaleas.

Remember,” he continued, his voice a deep growl, “use that language in front of my wife again, and I’ll be back to discuss it.”

For those of you who don’t know me, I’m a fourth generation Texan and I attended Stephen F. Austin State University where I majored in Business Administration, but took creative writing classes on the side because that’s where my heart was.

I have always loved reading and if it’s true that God doesn’t subtract the hours you spend reading from your life span, then I should pass the century mark with flying colors. I first tried my hand at writing when I was eleven, but the sun was shining and I had a new bike so that effort was doomed to failure.

I didn’t try writing again until I was well into my sixties. People ask me why I took it up then and my answer is simple, because my husband retired. If you don’t understand, just wait, you will.

My first novel, The Secrets on Forest Bend, won several awards. After that, I was hooked.

I’ve been blessed with two great kids and four grandkids. My late husband and I loved to travel and we saw much of the world. Kenya, New Zealand, and the Galapagos Islands are a few of my favorite places. After he passed, I thought my traveling days were over, yet I’ve since been to Argentina, Brazil, and Venezuela.

I live in Spring, Texas where I currently serve as president of the Northwest Houston chapter of RWA and volunteer at a local hospital. I also enjoy speaking to book clubs and writers groups.