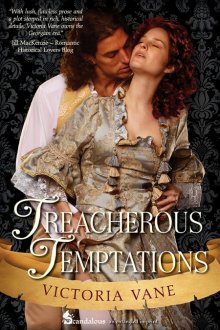 Comment to win any e-book title from Victoria' backlist. Just tell us who is your favorite rogue hero? Ends 2/22/2013

The Undeniable Appeal of the Irredeemable Hero

Like many historical romance readers, I have an inexplicable weakness for rakes and rogues, especially the truly debauched and seemingly irredeemable ones. In the words of Jenny, Mary Edwardes' abigail in Treacherous Temptations:

Jenny's brow wrinkled. "But I thought you were quite taken with his lordship."

"Taken in would be a more apt description. I was deluded by his handsome face and fine manners when he's naught but a scoundrel." Mary picked up her fan and waved it in front of her heated face.

"Is that the way o' it?" Jenny grinned. "But aren't they all rogues? At least the ones any girl would really want."

"But it's true! Why do you think all the town ladies are flocking to see the Beggar's Opera if not for the likes of the highwayman MacHeath?"

"Mayhap, miss, but I'd as lief give my heart to a so-called scoundrel like Lord Hadley, than enter a marriage bed with some demon of beastliness chosen by Sir Richard!" The maid's shudder echoed Mary's own feelings.

Rogues, rakes and scoundrels are favorite archetypes that I paint into most of my stories with subtle variations. My first experience with an unredeemable scoundrel began as a secondary character, Philip Drake, in my debit novel The Highest Stakes written as Emery Lee. Philip was a charming opportunist who eventually sold out his best friend, and even married the woman that Robert loved. What a bounder! Philip later becomes the hero in Fortune's Son, where I explore his past to show the events that molded him into the man we saw in THS. I then had to put him completely through the ringer in order to redeem him! Fortunately, he proves himself worthy in the end:

“Sukey, my dearest, Sukey,” he murmured her name helplessly. “I’m so unworthy of you. I’ve made such a mess of my life and have so very many regrets. I sought what I thought would yield happiness, but instead, found emptiness. Only you have been my consolation, my only salvation. You were my only hope all the while in the King’s Bench, and when I thought I’d lost you, I thought I’d lost my very life.”

“I’m sorry, Lydia. I can’t deny that, but can we not forget the past? Our engagement was too soon. We were neither of us ready, but I won’t hurt you again. Please believe that. I am not a promiscuous man. I have kept few mistresses and never more than one at a time, which I hope begins to speak to my capacity for fidelity. I believe I could be well content with just one woman—if she were the right woman.”

“Then you still want me, Marcus?”

“As much as my next breath. And I’d wager my life that I will continue to do so until the last breath leaves my body.” Words that stole her breath away.

My entire Devil DeVere series is built completely around another seemingly irredeemable rogue, Viscount Ludovic "the Devil" DeVere. Perhaps it's his devilish humor, or maybe his madcap machinations, but this rake of rakes and rogue of rogues manages to charm readers —even at his very baddest. As the reader travels through the series, DeVere's layers are gradually peeled away to revel a truly honorable man underneath his rakehell façade. It just takes a strong and principled woman to bring it out of him. When this finally happens, it almost brings me to tears. Here's my favorite excerpt from The Devil's Match:

"But love requires a desire to sacrifice, Ludovic. To give up purely self-indulgent pleasure in return for something deeper and more meaningful."

"Have you ever loved before, Diana?" he asked, deftly turning the tables.

The question caught her off guard. "No," she said softly, but then her armor came up. "I once thought perhaps I could have, but I never really had the chance to find out."

"Is that what truly eats at you?" he asked. "Incessantly and relentlessly plagues you? Refuses to ever give you any peace?" He dug deeper. "The lost opportunity? Never knowing for certain whether you have the capacity for it or not?" He twisted the knife.

"Yes! Damn you!" she cried, feeling the brunt of his counterstrike full force.

My biggest challenge to date has been the redemption of my most debauched hero, Lord Hadley Blanchard from Treacherous Temptations. Modeled loosely after Vicomte de Valmont from Dangerous Liaisons, Hadley seems to be a morally bankrupt libertine, a man without conscience or restraint, whose entire raison-d'être is sensual self indulgence.

His name pitched in her throes of ecstasy awoke him to startling recognition.

He withdrew from her so abruptly she had to grasp the wall to keep her legs from failing. "Barbara! What the hell are you doing here?"

"I've missed you unbearably, Hadley," she answered with a petulant look. "And you've cut me to the quick by failing to answer my last two letters."

"You sent no money," he snapped. "I clearly expressed how dire was my need."

"But darling, you are unjust," she protested. "Given your sudden departure from Paris for Venice, I perceived no real urgency."

His voice took on a frigid overtone. "You think I left Paris under my own volition? Pray let me correct your misapprehension, madam. You see, I've traded on my good name a bit too long and was induced to leave before my creditors installed me in the Bastille."

"Is it truly as you say, Hadley?" She regarded him with overt skepticism. "What of your annuity? Do you mean nothing remains?"

Her blank look forced him to translate with a mirthless laugh. "Fucked away, my dear. Literally and completely."

Her frown deepened. "How can you expect to continue living large across the Continent at my expense, while I'm forced to suffer alone in London playing the mournful widow under the disgrace of a ruined name?"

"Mournful widow, eh?" Hadley raked her with a blood-shot gaze that lingered on the brilliant gems adorning her hands, ears, and neck. He reached out to stroke her collarbone, tracing the diamonds resting above the milky white flesh of her bared breasts. "You don't appear to have suffered."

Remarking the lust-filled glitter in her eyes, Hadley cupped both of her breasts and dipped his head to lick the length of her neck. While his tongue played in the delicate hollow behind her ear, his hands went to work deftly removing her necklace. "Ah," he pocketed it with a smirk. "This should just about cover tonight's losses."

"You bastard!" Barbara shrieked. "You would steal the very jewels from my body?"

"Needs must…" he shrugged."Right now, I would steal the gold from a dead man's teeth. There are no depths to which one will not descend when in want."

A lover of history and deeply romantic stories, Victoria Vane combines these elements to craft romantic historical novels and novellas for a mature reading audience. Her writing influences are Georgette Heyer for fabulous witty dialogue and over the top characters, Robin Schone, Sylvia Day, and Charlotte Featherstone for beautifully crafted prose in stories with deep sensuality, and Lila DiPasqua for creative vision in melding history with eroticism.