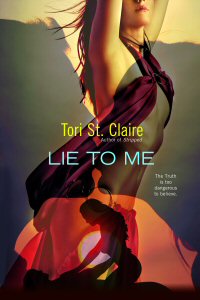 Enter to win a Signed Print Copy of Lie To Me!

***
An Internal Battle
by Tori St. Claire / NOR Author Page

Hi, everyone! It's great to be here at NOR's blog today--thanks for letting me pop over for the day.

The lovely folks at Night Owl asked me to provide an excerpt for my July 3rd, Berkley Heat release, LIE TO ME.

But what if the things you'd done destroyed someone you cared about's life? Or at least, you believe it did. What if you were then forced to confront that person, spend significant time in their company?

This is the issue that my hero, Alexei must face. He can't escape the truth of what he did to the one person who ever provoked true feeling. Now he's in close quarters with Sasha. He craves her acceptance. Needs it to survive. He's hard as nails on the outside, but inside, there's a softness that makes my heart melt. And I want to give you a peek at that internal battle.

“Just a second.” Her words came out in a flurry, like a child caught doing something she shouldn’t. She sniffed loudly, hiccupped, then cracked the door open.

Her glistening cheeks and puffy eyes sliced through Alexei’s defenses. He caught himself mid-wince and laid a palm flat on the door. He pushed, but she braced it from opening farther.

“Let me in,” he ordered in a quiet tone that warned he wouldn’t take no for an answer.

She puffed out a sigh and eased the door open.

Alexei shut it behind him. He took one look at her, choked on the vulnerability glowing in her light blue eyes, and cracked. Letting out his own sigh, he folded her into his arms. She came against him willingly. Her shoulder tucked against his chest, her arms wound around his waist. As he laid his cheek against the top of her head, he breathed in the exotic perfumes that had tempted him to oblivion much earlier. An unfamiliar knot loosened behind his ribs.

He didn’t know how long they stood that way, but with his eyes closed, her body soft and warm against his, exhaustion began to tug at his mind. His limbs grew heavier. His breathing leveled out. Her tight hold on his waist loosened.

Opening his eyes, he smoothed a hand down her long silken hair. “You should get some sleep.”

“It’s morning. The sun’s peeking up.”

Carefully avoiding the mirror, he shifted his gaze to the window, noting the early violet hue in the sky. “I guess it is.” Which meant they wouldn’t be going anywhere until tomorrow morning. He’d put her through enough for one night. Her father could live another day without her. Particularly since he knew she was safe at least.

As he nuzzled her hair once more, tiny wisps getting caught on his unshaven chin, all the places they connected soaked into his awareness. His pulse kicked up a notch. Against his thigh, his cock stirred. Damn. What was the matter with him? It was like some animal had invaded his body. Sure, the sex was mind-blowing, but this wasn’t normal. Certainly not for him.

His cock was going to have to wait. He knew from experience Sasha could go all night. But those amazing evenings hadn’t included bullets. She might be strong, yet he couldn’t ask her to endure more.

Easing out of her embrace, he wrapped an arm around her shoulder and guided her to the door. “You still need sleep.” All five and a half feet of her tensed like stone. Bracing against his steering efforts, she shook her head. “I don’t want to sleep, Alexei.”

In her adamant whisper, he heard the fear he had once known so intimately. Dreams had a way of making all the realities unavoidable. Alexei stopped urging her toward the door and turned to catch her chin in his hand. He tipped her face to his. A dozen reassurances floated through his mind. What made it off his tongue shocked him. “Why don’t you hate me?”

Check out Lie To Me and see what Sasha has to say!

A man of action…

After helping to break up a Russian human trafficking ring as part of the CIA’s elite Black Opal team, Alexei Nikanova’s newest assignment is to rescue one of the stolen women and return her to her father. When he arrives in Dubai, he discovers his target is Sasha Zablosky—a woman he knows all too well, and who has haunted him ever since their unforgettable time together in Moscow, two and a half years earlier. But he finds Sasha reluctant to leave her sheikh, the only true friend she’s ever known. Only Alexei can’t give her a choice.

A woman of deception…

With their yearning roused by intrigue, Alexei and Sasha can no longer resist temptation, and spend night after night in forbidden pleasure. Soon Alexei finds himself falling for her, even as he battles a shadowy menace to protect her. But Sasha is no innocent. She has a past darker than she could ever admit, one that Alexei could never forgive. And it is about to explode into her life once more. As the lies they tell themselves—and each other—pull them deeper into a perilous desire, what began as simple passion becomes a love certain to destroy them and end the lives of countless innocents.

National Bestselling Author Tori St. Claire grew up writing. Hobby quickly turned into passion, and when she discovered the world of romance as a teen, poems and short stories gave way to full length novels with sexy heroes and heroines waiting to be swept off their feet. She wrote her first romance novel at seventeen.

While that manuscript gathered dust-bunnies beneath the bed, she went on to establish herself as a contemporary, historical, and paranormal author under the pen name, Claire Ashgrove. Her writing, however, skirted a fine line between hot and steamy, and motivated by authors she admired, she pushed her boundaries and made the leap into erotica, using the darker side of human nature and on-the-edge suspense to drive grittier, sexier, stories.