Iconic love stories began long before Romeo and Juliet’s tragic tale and will continue long after Christian Grey and Anastasia Steele have faded from memory. Few can argue that being a voyeur to unfolding passion is not the perfect panacea for a bruised heart or inspiration for our own romantic journeys. I still remember my teenage self after I watched Top Gun. For months, I dreamed of being serenaded by Maverick in a bar. And I know I’m not the only girl who imagined I was a girl called ‘Baby’ rescued from the corner by a superhot bad-boy called Johnny. And then there was the time I wore shiny black stovepipes and pretended to smoke like Sandy just so a boy like Danny would ask me out. And I confess to being glued to ER just so I could join Julianna Margulies in solidarity as she yearned, year after year, for George Clooney.

Whether from a beloved movie or an unforgettable romance novel, everybody has their favorite loved-up couple. If you’re like me, the moment you select one couple, another barges in to claim first place. When I was asked to make a list of my favorites, I immediately pounced on Rose and Jack and their whirlwind love doomed from the moment they stepped aboard the Titanic. But it took only moments for me to set them aside in favor of Bella and her handsome vampire, Edward. The more selections I made, the harder it was to narrow down my list. But hey, I had a job to do and a deadline to meet, so eventually, I made my choices based on what resonates most for me in a perfect love story: a gorgeous alpha male, an intelligent sassy gal, heart-stopping kisses and grandiose gestures, and most importantly, a love so powerful it conquers everything that tries to beat it down.

So here’s my Top 5 Loved-Up Couples. Did one of your favorites make my list?

Allie and Noah, The Notebook

At first, I was reluctant to see this movie of one of my favorite books, because I couldn’t imagine an actor doing justice to the poetically sexy Noah. But justice it did, and along with Rachel McAdams and nearly every girl on the planet, I cried my eyes out and fell in love with Ryan Gosling. This second chance love story that spans across a lifetime is filled with heartbreak and laughter, and an epic kiss in the rain that makes Allie and Noah one of the best loved-up couples EVER!

I’m a die-hard Kristen Ashley fan, which means no list of mine is complete without a KA Happily Ever After in pride of place. Motorcycle Man is one of my all-time favorites because Tack Allen, the panty-melting MC leader of the pack is impossible to forget. I hated and loved his macho behavior when he tossed Tyra from his bed after one night of scorching sex. And I feasted on his downfall when he succumbed to the charms of this feisty redhead. Finding true love is a rocky road for this sizzling couple, but it makes it all the more rewarding for them (and us!)

Landon and Jamie, A Walk To Remember

OMG! Dmitri is a thousand-year-old vampire who intrigues as much as he terrifies. Wickedly handsome and known both for his cruelty and his bold sensuality, he is the trusted right hand to the Archangel of New York. Honor, a hunter of vampires for the Guild, has for years hidden her inexplicable attraction to the lethal vampire. Still recovering from a brutal attack that nearly killed her, the last thing she needs is to come face to face with her secret obsession. Bloodlust. Passion. An immortal alpha hero with fangs. And a love powerful enough to resurrect itself a thousand years after it suffered a tragic death. Could I possibly ask for more in a Top Five Couple? Nope. Dmitri and Honor are bloody perfect!

Every gal dreams of meeting a huge star that falls hopelessly in love with her. What makes this story cherished is the 180-degree turnabout. William—played by Hugh Grant who is the only non-alpha hero worthy of making a romance list cut—is a London bookstore owner. He’s a regular guy with regular friends. Admittedly, some are more eccentric than others. Oh. And he thinks he’s in love with his best friend's wife. When famous movie star Anna Scott—played by Julia Roberts at her romcom best—bumps into him and he spills his coffee down her front, his humdrum life implodes into spine-tingling kisses, embarrassing confessions, and media frenzies. There are lines from this movie that are tattooed on my brain but the best has to be, “I’m just a girl, standing in front of a boy, asking him to love her.” Cringe-worthy, and so totally freaking fantastic!

Zoey Morgan seems to have it all as a successful surgeon in Boston. However, perfection lies only on the surface. Plagued by nightmares and amnesia from a tragedy that ripped her family from her fourteen years ago, she finds the courage to reach out to the only man who can make her feel safe. She’s buried the memory of their love, but her heart—and her body—responds to the ex-marine in ways that are all too familiar.

Grayson “Gray” Walker’s heart shattered when Zoey chose another man over him. Since then, he’s built an impenetrable wall around his emotions. But from the moment she implodes back into his life, her vulnerability breaches his defenses. His skills as an elite member of the King Security team cannot shield him from the devastation of learning he might have left Zoey high and dry when she needed him most. Now, Gray must navigate the tripwire of helping her heal while protecting himself from being hurt again.

As the embers of their potent love reignite, an old threat awakens, leading to greater danger than ever before.

Anni Fife is an exciting contemporary romance author who has already made her mark in the popular genre of Steamy Romantic Suspense. Her debut novel, Luke’s Redemption, was a Finalist in the 2017 RONE Awards. Anni says she credits Kristen Ashley as her guiding inspiration, and strives to make her characters equally as heart-wrenching and unforgettable. She is currently working on Eva’s Peace (King Security Book 3).

Anni closed the door on a successful career in television production to fulfill her lifelong passion, writing. In the space of a month, she shut her business, packed up her city life, and moved to a small seaside village. When she’s not writing, she can be found on the beach searching for pansy shells, or drinking red wine and gabbing with her gal posse.

If you want to know when Anni’s next book is releasing and be first to get regular updates and BONUS TREATS, visit her website and sign up to join her POSSE.

Anni is published by The Wild Rose Press, and is a member of Romance Writers of America (RWA).

You can read all about Anni on her website, and join Anni’s Posse to get regular updates and Bonus Treats—www.annifife.com 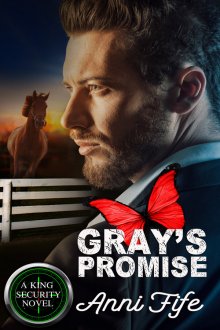