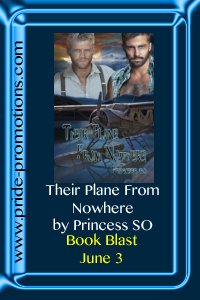 Their Plane From Nowhere by Princess SO

Princess SO releases Their Plane from Nowhere, a rugged m/m romantic suspense.

Their Plane from Nowhere 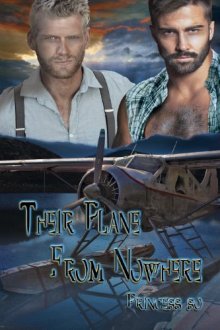 In their small town in the Pocono Mountains, Earl Knox and Hank Grisset have never been considered among the pretty ones to anyone but each other. As lucky as Hank and Earl consider themselves to have found each other, that’s about as far as luck has gone. All those Could’ah— Should’ah— Would’ah— moments a man never sees comin’, but that don’t stop him from regrettin’ them later in life.

When Earl makes a critical decision that ultimately outs him and Hank, a mysterious plane shows up at their lake house. Coming out in a small town can erase friendships in a heartbeat. But when a rift in the family leads to a life-threatening accident, only their love for each other is gonna get them through this—that, and their plane from nowhere.

“Adventure is out there!” a child character’s voice called out with enthusiasm. And thus began a montage of Mr. Fredricksen’s life.

There was a reason he picked this one above all the others. Sure, Finding Nemo and that other one about the supersuits was pretty damned funny, but this one—about the boy growin’ up with his best friend, how they got married with a dream and grew old together—and mostly how life got in the way of their dream to Paradise Falls—had hit him so hard, it hung in his soul and on his skin like melted cheese, only it didn’t taste as good. Hoverin’ like smog. The more you noticed, the more you started to choke on it. And then, the next mornin’ when they’d went back to the hospital and his little Leanne handed over his first granddaughter, he’d looked up wearin’ the biggest grandpop smile only to see Gracie leerin’ at him with so much hatred and loathin’. It shouldn’t have been that way; it should have been the face of the man he loved. Earl’s heart shattered that very moment. So much time had been lost lettin’ life get in the way of his Paradise Falls. He’d nearly broke down just then, too happy to give over his granddaughter just yet and too heartbroken that Hank wasn’t with him to share in it, like he should’ah been.

He’d even walked over to the window, turning his back to the others, and cradling the tiny bundle against his face. He kissed her sweet pink head, and then used it to wipe the tears from his cheek.

Gracie got tired of waitin’ her turn and started puttin’ up a cussin’. She even pulled out the Lord’s name in vain. Earl just shut her out, still lookin’ out the window with his granddaughter and silently pointin’ out to the mountains in the distance to where Hank could be found, wipin’ another tear off with her fussy, little pink head.

Behind him, the cussing continued. To Earl it was just another sound that separated him from them while he drowned on the inside. He couldn’t count the times he’d heard it ’cause he did his best not to. Didn’t matter where they were either, he never answered, and he never shouted back at her. Just like that day at the hospital, he let Gracie continue on until Leanne snapped about the GD word. Earl’d said nothing. He never did. No matter what Gracie threw at him, he had learned a long time ago, he couldn’t shut her up, so—he shut her out.

We Came— We Saw— and then we made it sexy.