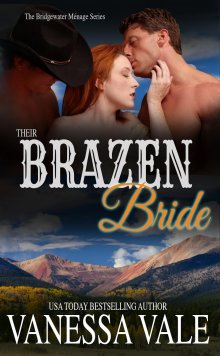 When Abigail Carr returns to Bridgewater after long years away at Finishing School, Gabe and Tucker Landry will not be dissuaded from the only woman who’s held their attentions—and affections—for years. They’re done waiting. When Abigail claims she must return to Butte, and to her fiancé, Gabe and Tucker refuse to give up so easily. Since she doesn’t have a wedding band on her finger, nor love in her heart, they consider Abigail free for the taking. And seduce her they do…right home to Bridgewater, where they not only marry her, but claim her body in the most sensual experience of Abigail’s life.

But Abigail knows that a future as a wife and mother is not possible, not for her. She only came home to save a friend’s life, and she dare not stay. If she doesn’t return to Butte in the next three days, her best friend will die. And no matter how much Abigail wishes she could stay, and be the wife Gabe and Tucker deserve, she must save her friend. The cruel criminal who threatens her friend will not hesitate to kill anyone important to Abigail, including her new husbands.

Abigail will make a hard choice, and save them all…no matter the cost to herself or her heart.

Their Runaway Bride- Book .5 (Available for free on my web site!)

“Are you all right, Abigail?” Gabe asked as we rode across the open prairie. The sun was hot, and I was thankful for my straw hat.

I was exhausted and nervous and completely frazzled. I hadn’t been able to sleep because of worry for Tennessee, what I was going to take to Mr. Grimsby. When I did sleep, I dreamed of guns and death. And then, always, the decadent thoughts of the Landrys. Now, they rode beside me. How could I not be nervous, spending the last hour riding beside Gabe and Tucker, the men I wanted with all my heart? Their clean scent was undeniable and, even with their large size, both sat a horse as if born in a saddle. I couldn’t help stare at their strong thighs pressed taut against their pants, their corded forearms peeking out from their rolled up sleeves. The size of their hands. It was a torture of my own making.

I wanted to tell them the truth, not just about the imaginary Aaron, but my love for them. The words perched on the tip of my tongue. The men were quiet and prepared to listen to anything I had to say, but I couldn’t do it. As soon as they found out I’d lied, they’d hate me. And I certainly couldn’t tell them the real reason I’d lied. The idea of either of them having Mr. Grimsby’s gun aimed at them made my blood run cold.

And if they knew I had my mother’s diamond brooch tucked away in my bag to give to Mr. Grimsby, they’d be livid. It was the one thing of value James wouldn’t miss right away, was small enough to hide, and held high value. I was stealing from

James, who was to give it to his bride on their wedding day, and using it to barter with a very bad, very dangerous man for Tennessee’s safety.

I glanced briefly at Gabe, so handsome with his dark hair and beard, equally dark and piercing eyes. I bit my lip, my mind—my heart—in anguish. I gave him a curt nod when he glanced at me, then looked toward the snowcapped mountains in the distance.

My original intention was to go to Butte on my own, overnight, give Mr. Grimsby the brooch and ensure Tennessee’s release then return home. I would tell James—and the entire town—I broke things off with my suitor. James would probably be happy I ended a romance with someone who lived so far away. Then I’d be free of Mr.

Grimsby and the lie once and for all. There would be some pity from the townspeople, but I didn’t care. As long as Tennessee was safe and Mr. Grimsby wouldn’t send his henchmen after James, everything else was trivial. When James discovered the heirloom brooch missing… well, I’d worry about that another day.

But my plan wasn’t to be. James had forbidden me to travel on my own. Concern for my safety out in the wilds all alone his reason. Although we’d argued while he was sick, he still won.

Who doesn't love the romance of the old West? Vanessa Vale takes the sensual appeal of rugged cowboys a step further with her bestselling books set in the Montana Territory. They are much more than just sexy historical westerns. They're deliciously naughty reads that sometimes push the boundaries of fantasy. It's pure escapism with quite a few very hot, very alpha cowboys.

When she's not writing, Vanessa savors the insanity of raising two boys, is figuring out how many meals she can make with a pressure cooker, and teaches a pretty mean karate class. She considers herself to be remarkably normal, exceedingly introverted and fairly vanilla, which does not explain her steamy stories and her fascination with cowboys, preferably more than one at a time.

She lives in the Wild Wild West where there's an endless source of 'research' material.