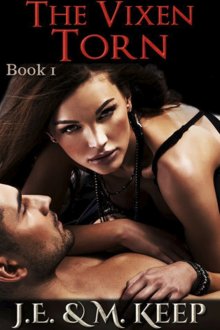 The Vixen Torn
The Vixen Series, #1

Long retired from her life as an assassin, Anjasa amuses herself with seducing handsome, rich men in bars and living life one night at a time.

She's a rare woman, an elf among humans, a beauty among commoners, and she has no trouble getting the attention of those around her, but it's only a matter of time before she attracts the wrong kind of men. When she agrees to seduce one noble's cousin to steal his family fortune, she finds herself witness to mob violence and worse.

Yet she likes her men rough, doesn't she?

But quickly it gets out of hand, even for her. When he forces her to fulfil his sick needs, and then blackmails her to kill his cousin, she realizes her life hangs in the balance between the affairs of murderous men.

When she reaches her breaking point, Anjasa turns to someone even worse, someone more dangerous than she could imagine, in order to make it through the night. Someone strong, mysterious and deliciously inhuman.

The Vixen Arises
The Vixen Series, #2

A cryptic warning from a beautiful man, a desperate need for her blood from her vampire lover, and Anjasa is forced out of her apathy.

For too long, she'd been hedonistic without purpose, and now the elven bombshell is getting her life back together. It's just too bad that the entire city is working to stop her.

When a gorgeous man warns her about what was to come, she shrugs it off. That is, until Jaral, her lover, warns her about their enemies, and she is forced to take the lead in protecting her new life or risk losing it all. Everything comes to a head as she seeks to balance opposing forces in a game of strategy she's only just beginning to play.

They are long term, loving partners in a very happy relationship and because of this, they love to torture their characters. Dark romance touches all of their stories in one way or another, from elicit trysts to forbidden love.

All work is 18+, trigger warnings available on the second page of every book. If you want to hear about new releases, sign up for the newsletter!