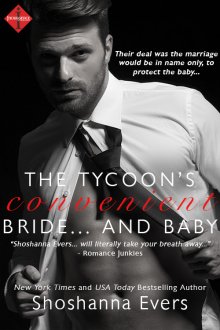 Excerpt: The Tycoon's Convenient Bride and Baby by Shoshanna Evers

Join us for this Baby and Bride book!

The Tycoon's Convenient Bride and Baby

Their deal was the marriage would be in name only,  to protect the baby…

After her brother and his wife go missing and are presumed dead, Lauren Peters plans to raise their infant daughter. Her brother’s will, however, stipulates that baby Callie can only be raised by a married couple. Lauren’s as single as they come.

Mack Hansen can’t stand idly by while his business partner’s baby is thrown into a foster home. As he sees it, there’s only one solution—he and Lauren will marry for the sake of the baby—and he’ll keep his attraction to her at bay.

Lauren knows that Mack is all about business, including their marriage of convenience. But her unexpected feelings for him have her turned upside down. With passion sizzling between
them, can Mack keep Lauren from stealing his heart…and becoming his wife for real? 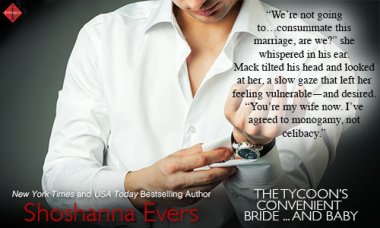 My wedding. It was nothing like she’d hoped it would be. She never dreamed she’d marry a man who didn’t love her. Who couldn’t love her, since all he saw when he looked at her was a solution to a problem. An obligation to his business partner and best friend.

“To love, honor, and cherish her. To be with her in sickness and in health,” the judge was saying. “Forsaking all others, keeping only unto her for as long as you both shall live?”

Mack looked at her and smiled. A smile that seemed to say, Wow, we’re really doing this. What a joke we’re pulling.

“And Lauren Peters, do you take this man to be your lawfully wedded husband, to live together in holy matrimony. To love, honor, and obey. To be with him in sickness and in health, forsaking all others, keeping only unto him as long as you both shall live?”

The word “obey” bugged her, but she wasn’t planning on being with him for as long as they lived, either, so what was one more white lie in this marriage of convenience? Lauren swallowed hard around the lump forming in her throat. This was it.

“Mack, please place the ring on her left hand, and repeat after me. With this ring.”

Mack slid the thin platinum ring onto her ring finger.

He’d had his assistant run out to the jewelry store down the block from his lawyer’s office and buy two plain bands for them as placeholders. Of course she couldn’t have picked out her own ring, what was the point? None of this was real.

“With this ring,” Mack said.

The cool metal closed around her finger. It sure felt real.

Mack smiled. “I thee wed, in love and truth…”

“And with all my worldly goods I thee endow.”

Well, at least for a while, until we get divorced. And then the airtight prenup she’d signed would eliminate that vow.

“And with all my worldly goods, I thee endow,” Mack repeated.

She wondered if he was thinking the same thing about the prenup as she said the words and placed the ring on his finger.

She held his hand. It felt warm and comforting as it enveloped hers.

“Mack Hansen and Lauren Peters have consented this day to live together in holy wedlock. They have given and pledged themselves to each other in the presence of these witnesses. Therefore, by virtue of the authority vested in me by the laws of the State of New York, I now pronounce you…husband and wife.”

“Wow,” she whispered. This man, this near-stranger looming above her, staring down at her with that gorgeous face of his…was her husband.

“You may kiss the bride,” the judge concluded.

Suddenly Mack’s mouth was on hers, his warm lips pressing urgently against her own. She gasped in surprise at the passion behind the kiss. This kiss…this was no fake kiss.

It was real. At least…it felt real.

Did it feel real to him too?

His tongue slipped inside her mouth and she parted her lips, delighting in his taste. Kissing him was so…familiar, and yet so new at the same time. She’d always imagined what it would be like, and after that one drunken kiss almost a decade ago that she’d pretended to forget, she couldn’t help but fantasize about what would have happened if the kiss had gone further than it had.

She wrapped her arms around his neck, pulling him down toward her, deepening the kiss. Her husband. She was kissing her husband. This might never happen again—now might be the only time she got to experience this particular pleasure.

She heard a bemused clearing of a throat behind her.

Mack lifted his lips from hers and smiled at the judge. “Thank you, your Honor,” he said.

“Save it for the honeymoon,” the judge said with a smile, shaking his head. He called to the waiting couples lined up by the hall. “Next!”

She blushed at the thought. “We’re not going to… consummate this marriage, are we?” she whispered in his ear.

Mack tilted his head and looked at her, a slow gaze that left her feeling vulnerable—and desired. “You’re my wife now. I’ve agreed to monogamy, not celibacy.”

Oh God, that was true. She couldn’t expect a red-blooded young man to be abstinent for a whole year. And if she didn’t want him sleeping with anyone else…

She inhaled sharply, desire pooling in her belly. This was really happening. She’d painted herself into a corner with her own rules. Not that she minded her predicament.

Mack smiled again, his crooked incisor inspiring her to smile back. “Yes,” he said, “I expect we should consummate this marriage. Tonight.” 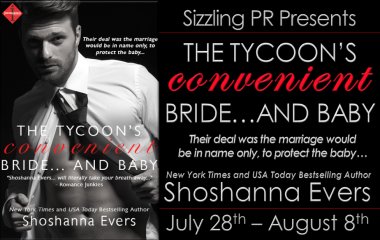 Shoshanna is a New York native who now lives with her family and two big dogs in Northern Idaho. She welcomes emails from readers and writers, and loves to interact on Twitter and Facebook.