Dear Reader, A Letter to My Fans

I wrote this story at a time when our country was deeply divided. There has been a lot of anger and anger breeds entrenchment and the certainty that one point of view is the only way to go. Under those circumstances (and believe me, I have been as guilty as anyone), we stop listening and respecting and seeking common ground.

I wondered what might happen if two people on opposite sides of the fight fell in love. (And yes, I get the obvious Romeo and Juliet comparison. Thankfully, this story is a romance which by definition guarantees a happy ending!)

As a person who believes in the basic decency and goodness of most people, I am an optimist, and as a writer, I tend to hang around with characters who do not give up when it would be really easy to do so. Nell could take her son and move away while Trey’s cattle ranch will survive no matter what so he has little call to get mired down in the fight between his neighbors. And yet, they stay and they join forces, and they come up with solutions. And I love them for that—so I let them win!! Just wish it were that easy in real life!

I hope you enjoy Last Chance Cowboys: The Rancher, and mostly, I hope you will be in touch to let me know your thoughts.

All best and happy reading!

Last Chance Cowboys: The Rancher - Where the Trail Ends, #4

"You can't be sure we're doing the right thing," she said.

He drew closer to the barbed wire separating them. "It's impossible to know what's right. But it doesn't stop me from wanting you."

The world is changing, and the West isn't as wild as it used to be. Trey Porterfield welcomes a new era of law and order—and the influx of settlers coming to the Arizona territory. But not everyone is willing to see the old ways change, and as the cattlemen and the herders take sides, a full-blown range war may be inevitable. There's only one way Trey can see to bring peace to his feuding neighbors.

Nell Stokes is a young widow fighting just to stay alive. In Trey, she sees a chance to heal old wounds and start over. Love was never in the cards, yet as Trey and Nell fight to unite the feuding land, they'll discover a passion neither could have expected...and a danger far greater than either has ever known.

Anna Schmidt is a three-time finalist for the coveted RITA award presented annually by Romance Writers of America. In addition she has been a four-time finalist for the Reviewer’s Choice Award from Romantic Times magazine—an award she has won twice. Her latest novel THE OUTLAW (Book Three of her Last Chance Cowboys series) will be published in July. Book four—THE RANCHER –will be out in January, 2018.

Publisher's Weekly had high praise for Anna's WWII series--THE PEACEMAKERS--stating that "Schmidt seamlessly integrates...actual events, and the courageous real-life individuals who fought against Hitler’s regime, with her fictional characters and their story, to produce a strong tale of hope and love in the face of insurmountable obstacles."

The author of over thirty works of historical and contemporary fiction, Anna has worked in the corporate world for two international companies, taught at the college level and is a popular presenter of hands-on workshops. She splits her time between Wisconsin and Florida, noting that, “I am blessed to have a career that travels well!” 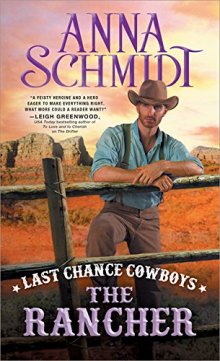