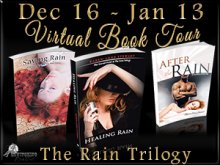 Enter the Giveaway below via Rafflecopter!

Today we are spotlighting The Rain Trilogy!

Saving Rain - The First Novel in The Rain Trilogy 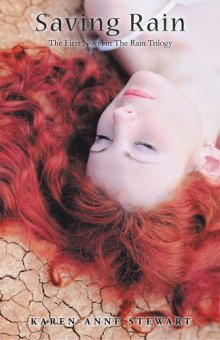 Raina has tried to forget her past, forget the pain, but when she finds herself staring straight into the fury blazing in her ex-boyfriend's eyes, her dark past comes rushing back. Furious with herself for actually having chosen someone like her father, she uses that anger to her advantage and fights for her life...and for her future that she prays will involve the man she can't seem to get out of her head.

Kas is a natural leader, a fierce fighter, the type of man you send in when you need to get the job done. He is a courageous hero who is used to risking his own life to save others, but can he save the one who has captured his heart from her horrific past and the men who are hell-bent on destroying her?

As Kas and Raina try to navigate through the twists and turns of a deviously intelligent human trafficking group, they find solace in each other's arms. Can they infiltrate the trafficker's tight ring, saving the innocent lives from imminent danger before it's too late?"

Kas’ heart pounds through his chest when Raina’s cry tears him out of his troubled slumber, and he hears something shatter.

Not taking the time to put on his shirt, he runs into the kitchen and sees Raina kneeling on the floor, cleaning up broken glass with her bare hands. He is about to tell her to stop when bright red liquid oozes from her finger as one of the jagged shards slices her, causing blood to drip onto the floor. Raina looks up just in time to see Kas quickly coming towards her, and her stomach ties into a million tight knots.

Kneeling down beside Raina, Kas reaches to grab the towel from the counter above her. He stops short when she throws her hand up, turning her head away and squeezing her eyes shut, instinctively protecting herself from a blow that he would never have administered.

Rage runs rampant inside of him. He wishes he could maim the men responsible for causing her to have such an ingrained defensive reaction.

Kas focuses on reining in his rage, not wanting to scare Raina anymore than she already is. Sitting back on his heels, he gives her some space before he tells her in as much of a calming tone as he can manage at the moment, “You will find out that I’m not like them. I won’t punish you for having an accident, and I won’t punish you when you do something wrong or something I don’t like.” He looks her squarely in the eyes and, with as much reassurance as he can possibly fit into a glance, he tells her, “I don’t hit, darlin’.”

Shame and embarrassment darkens her face as she mumbles, “I’m sorry.”

Kas moves towards her slowly, being careful not to make any quick movements that could frighten her. He curses under his breath when he sees that her finger is still bleeding and how she seems more concerned with trying to clean up the rest of the glass than taking care of the cut. He bitterly wonders at how severely her father must have punished her for her to react so quickly and defensively over something as trivial as a broken glass. “I’m going to get you a towel for your finger, leave the glass, I’ll get it with the broom.”

Desperately needing a distraction from her embarrassment of how she cringed like a cornered rabbit, she continues to pick up the shards of glass, “I’ve got it.”

Kas makes a mental note to beat the hell out of her father if he ever finds out who he is. He firmly, but gently, grabs her hand and wraps the towel around her finger. He hates the way she’s avoiding his gaze, the way shame has impinged her beautiful eyes. Helping her stand, he sees the brief flash of pain replace the shame, and he knows she has hurt herself by kneeling on the floor like that with broken and cracked ribs.

Gently taking Raina’s finger, Kas places it under the faucet before grabbing some peroxide out of the cabinet. “This might sting a bit,” he warns her as he pours some over the cut. Once he’s satisfied that the bleeding has stopped, and she doesn’t require stitches, he wraps a band aid around it before slowly bringing her injured finger to his lips and kissing the tip.

The jolt of electricity from his lips caressing the tip of finger brings her back to reality, out of the fog of shame where she was temporarily lost. He said ‘them,’ Raina realizes in a panic. “What did you mean by ‘them’?”

Kas gazes into Raina’s questioning jade eyes and lets out a long, slow breath. “I know your father abused you,” he confesses. Her eyes widen, and she starts to pull her hand away, needing some distance to absorb this new information, but Kas refuses to release her. Pulling her closer to him, he runs the back of his
fingers down the side of her face, so pleased and relieved that she doesn’t flinch this time.

“While you were still in a coma, the doctor ran tests that showed evidence of abuse,” he starts carefully, gauging her reaction. Raina lowers her gaze, trying to process just how much Kas knows, but he tilts her chin back up, to where she can’t look away, and musters up the courage to finally ask, his voice barely above a whisper, “What is your real name, Raina?”

More In This Series:

Karen-Anne Stewart has always enjoyed reading and how a book can sweep her far away, engrossing her deep into the story. She has enjoyed writing from an early age and became interested in becoming an author after one of her college courses. When she started writing Saving Rain, the intended novel quickly turned into a trilogy. She knew that the characters of Kas and Raina could not be compressed into a single book. When Karen-Anne is not writing, she enjoys spending time with her first love, her family. She shares a home with her husband and daughter, their two dogs and their cat. She enjoys reading, hiking, and visiting new places. She plans to continue writing and sharing her stories with her readers.