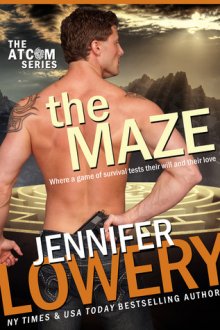 The Maze by Jennifer Lowery #Excerpt

Jennifer Lowery releases the first in a new series.

…A game of survival tests their will and their love.

A mission she can’t forget…

The first female operative for the counterterrorism unit known as ATCOM, Atalanta Devayne is haunted by a former mission gone wrong. That mission led to her imprisonment, torture, and ultimate retirement, along with her loss of faith in the man she’d trusted with her life.

Former Navy SEAL, Noah Kincaid, bears the responsibility of Attie’s imprisonment and blames himself for not protecting her from drug lord Carlos Santiago. This time he won’t fail her.

In a deadly game of survival.

Santiago has resurfaced and set up an elaborate plan to exact his revenge on Attie by taking her brother hostage. The only way to save him is by revisiting the darkness of her past and relying on a man she can’t trust. In a battle of life or death, Noah and Attie are put to the test. They must face challenges to overcome the past and accept their feelings for each other before the danger that tore them apart separates them forever.

Attie wearing nothing but a towel was dangerous to Noah’s peace of mind, but Attie in a man’s dress shirt was lethal. For the sake of cameras, he allowed his appraisal to be open and genuine and the flare in her eyes indicated she knew exactly what he was thinking. But somewhere in the logical part of his conscience he knew he couldn’t act on the attraction.

He didn’t know Santiago’s motivation for allowing him to spend the night with Attie and he wasn’t going to question it, but he would keep his guard up. Santiago didn’t do anything without purpose.

Attie slid into bed beside him and surprised the hell out of him when she rolled over onto his chest and practically draped herself on top of him. Her hands went to his shoulders and her lips hovered an inch from his.

“Let’s make this look good,” she whispered, and kissed him just as the lights went out. Noah barely gave Santiago any thought as he crushed Attie to his chest and took control of the kiss. He had never known hunger like this. Like diving into uncharted territory without a swim buddy, with the potential to complicate his life in ways he wasn’t prepared for.

He clamped an arm around her waist and laid her more fully on top of him.

Attie stiffened and pulled away. She was still for a moment and he could hear her breathing heavily, then she rolled onto her own side of the bed.

“Shows over,” she said, her voice low and strained.

She sounded upset, so he let it drop.

This was going to be a long night. 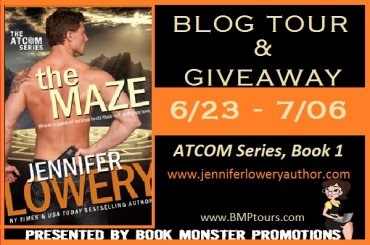 NY Times & USA Today bestselling author, Jennifer Lowery is a romantic at heart. She believes that happily ever after is only the beginning of her stories. And the road to that happy ending is paved with action, adventure, and romance. As her characters find out when they face danger, overcome fears, and are forced to look deep within themselves to discover love.

Jennifer lives in Michigan with her husband and two children. When she isn't writing she enjoys reading and spending time with her family.