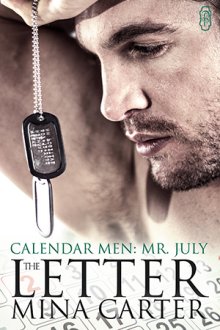 Join Mina as she brings you Mr. July!

Sergeant Rick Week’s career ended in a hail of bullets and the death of a friend. After months of recuperation, he’s finally able to fulfill a promise he made to that friend. All he has to do is find a girl and deliver a letter. Simple. Maybe…

Hattie Jameson lost the man she loved. KIA. A year and a half later, she’s trying to move on but a letter for a charity calendar shoot addressed to her late fiance, Billy, rocks her. Not as much as the sexy as hell Scottish soldier who turns up on her doorstep. The man who was with Billy when he died. She shouldn’t find him attractive. Not at all…

Meanwhile fate, and Billy himself, have plans to bring the reluctant lovers together. 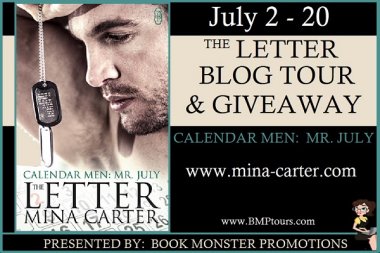 Mina Carter was born and raised in Middle Earth (otherwise known as the Midlands, England). After a slew of careers ranging from logistics to land-surveying she can now be found in the wilds of Leicestershire with her husband and young daughter...the true boss of the family.

Suffering the curse of eternal curiosity Mina never tires of learning new skills which has led to Aromatherapy, Corsetry, Chain-maille making, Welding, Canoeing, Shooting, and pole-dancing to name but a few. A veteran Star Trek RPGer, she's run both games and groups of games but now finds her home in Alpha Fleet, one of the internet's oldest Star Trek simm groups.

She juggles being a mum, writing full time and tossing another ball in the air with her cover artwork. For Mina, writing time is the wee hours of the morning before anyone wakes up and starts making demands, or any spare minute that can be begged, bought or conned.

Her first stories were penned at age 11, when she used a stationery set meant for Christmas thank you letters to write stories instead. More recently, she wrote for her own amusement and to save on outrageous monthly book bills. Now she's totally addicted and needs her daily writing fix or heads roll!