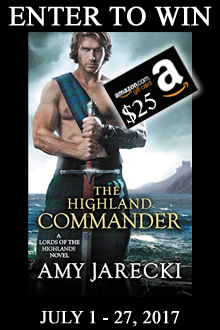 It's time to check out Amy's 2nd book in her The Highland Lords series and get entered to win a $25 Amazon Card and print book from her!

She cannot resist the man behind the mask...

As the illegitimate daughter of a Scottish earl, Lady Magdalen Keith is not one to partake in lavish balls or other frivolities. Yet at her father's urging, she agrees to dance with the battle-weary officers at this year's holiday masquerade. It's practically her civic duty! But when one such officer-whose dashing good looks cannot be disguised by a mere mask-sweeps her off her feet and into his arms, the innocent lass can't help herself. Her lips are his for the taking.But will he betray his country for a kiss?

Navy lieutenant Aiden Murray has spent too many months at sea to be immune to the charms of this lovely beauty. Even after he returns to his ship, she lives in his dreams. But when he discovers Maddie's true identity-and learns that her father is accused of treason-will the brawny Scot risk his life to follow his heart?

When Akira Ayres finds the brawny Scot with a musket ball in his thigh, the healer has no qualms about doing whatever it takes to save his life. Even if it means fleeing with him across the Highlands to tend to his wounds while English redcoats are closing in. Though Akira is as fierce and brave as any of her clansmen, even she's intimidated by the fearsome, brutally handsome Highlander who refuses to reveal his name.

Yet she can never learn his true identity.

Geordie knows if Akira ever discovers he's the Duke of Gordon, both her life and his will be forfeit in a heartbeat. The only way to keep the lass safe is to ensure she's by his side day and night. But the longer he's with her, the harder it becomes to think of letting her go. Despite all their differences, despite the danger-he will face death itself to make her his . . .