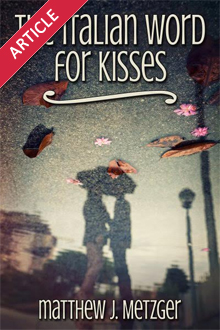 The Hardest Part of Writing by Matthew J Metzger + Excerpt

The hardest part of writing is deleting.

This doesn't happen to me often -- I'm a plotter, not a pantser, so I rarely have something that needs to go that's so huge it's a full-on deletion -- but as The Italian Word for Kisses formed, I realised that there was going to be a major, major change to my original plans.

The way that the plot formed, I needed the main couple to be in an established, long-term relationship. Simply because it needed to be old news to every other member of the cast bar the antagonist. They needed to be out and proud, so to speak.

Yet my original plans included that coming out for one of them.

Luca was the first character I created for this book. I knew what he looked like, I knew his temperament, and I knew his heritage. Very quickly, his behaviour was explained by his family: his Yorkshire father, stern and quiet; his Italian mother, loud and commanding; and his four brothers, all unashamedly and energetically masculine. All five boys jostled for attention within the family, and obtained it generally by being pretty noisy and obnoxious.

I wanted to show this kid -- this half-Italian kid from a Yorkshire background, with working-class parents and living in a far-too-small terraced redbrick across the road from his boyfriend -- dealing with coming out. Or more likely, being caught. Right from the very beginning of this character's development, I wanted to show that.

Only as the plot formed, it needed for them to be well beyond that stage. It needed that. Keeping Luca closeted at home muddied the waters so much that it became unworkable, and I was faced with removing a developmental arc that I desperately wanted to keep...and couldn't.

In this book, anyway.

The fact is, Tav and Luca and their messy, laddish, brash little world, worked for me in a way that even my favourite books doesn't. It fell together more than I deliberately created it. And deleting such a huge part of Luca's history jarred too unpleasantly.

Those scenes, that arc, was siphoned off and stored away for another time. Maybe a short story, maybe another book, maybe a freebie on my website one day when I tidy it up and find the urge again.

Some things shouldn't be.

The Italian Word for Kisses

It’s no secret Tav and Luca are going out. After the accident, it’s also no secret that new kid Jack Collins has a raging case of homophobia, and is not best pleased about having given the kiss of life to a gay guy. Either Luca quits swimming, or Jack is going to make him.

Tav favours the tried-and-true method of knocking Jack’s teeth down his neck, only he can’t really afford another school suspension. Luca favours just ignoring him, only ignoring a penknife being held to your throat at New Year’s Eve is downright stupid.

Thing is, Luca suspects Jack is a victim of something himself. And time is running out for Luca to get through to Jack, before Jack gets rid of him.

The bang of the changing room door and the amiable greeting from one of the other boys caught Luca's attention, but the sudden, sharp silence made his blood run cold. All at once, Luca was both afraid, and angry with himself for being afraid. So he squared his shoulders and turned on his heel, folding his arms over his chest and meeting Jack's scowl with a glower of his own.

"What the fuck are you doing here?" Jack snarled.

"Fuckin' swimming. What about you?"

It was like the rest of the team didn't exist. Luca didn't dare break eye contact, and Jack -- although he tossed his bag onto a bench and unzipped his jacket, was zeroed in on Luca in a way that made the hairs on Luca's arms stand on end.

"Dunno what kinky shit you're into, Collins, but I don't follow your orders." Being both an older and a younger brother had made Luca able to bluff with ease, and despite the impotent anger, the tart tang of shame around the edges of his brain that this moron had somehow gotten one over him and seized some power in this stupid fucking game, his voice sounded -- even to him -- arrogant and bored.

"I said go," Jack repeated. The other boys hovered uncertainly, but Aaron and David had both closed ranks to Luca's shoulders, and Luca took a fortified breath. Aaron looked steely. David looked a little more confused, but determinedly hostile all the same.

"Like hell I'm going," Luca said. "You got a problem with a pouf on the team, you need to fuck off and get your head out your arse. I'm here to swim. I'm not going nowhere."

"What the fuck is going on?" David asked.

"He's a fucking faggot, and I won't have his kind here -- I warned you, I fucking told you, and you're still fucking here!"

"Yeah, Jack, lay off already, who d'you reckon you are anyway, you're new--"

"Don't fucking call him a faggot, twat," one of the other boys -- a lad called Ryan that Luca had never so much as spoken to outside of the club, and was in the year below them anyway -- sneered, and he shot out a hand to shove at Jack's shoulder.

"I told you to stay away!" Jack bellowed, and his hand vanished into his unzipped jacket. "I told you, I fucking told you --"

The changing room erupted; the flick-knife flashed under the sickly halogen lights, and Luca's back slammed into the wall of locker doors as Aaron and David shoved him back as one. Both doors -- one to the foyer and one to the pool -- banged loudly, and the bolshy kid, Ryan, lashed out with a fist, smashing into Jack's jaw from the side. A couple of men came rampaging over from the showers in their wet trunks, all the noise bouncing off the walls until it was dizzying. Coach arrived with a shrill shriek of the whistle, and the knife had gone somewhere but Luca couldn't tell where in the ruckus, and then Aaron's hand was on his shoulder and he was being steered off into one corner of the changing room, and --

A flush of hot, furious shame boiled up Luca's stomach and into his guts, and he twisted away from Aaron's hands and grabbed for his kit bag. He didn't need Aaron to fucking protect him. He didn't need anyone to protect him, he wasn't some pathetic little kid who needed their hand holding. He shouldn't need defending, he was a Jensen! He should be able to defend himself.

He grabbed his bag and bolted. As he fled up the stairs, a burly security guard and Coach were wrestling the knife out of Jack's hands in the corridor, both shouting at him, and Jack shouting back, face red and voice hoarse and shrill with fury.

"You fucking steer clear of me, Jensen!" he bellowed after Luca, who didn't dare look back. "F'you know what's good for you, you'll stay out of here, you fucking queer!"

Luca reached the top of the stairs, and ran.

Matthew J. Metzger is  an asexual, transgender author dragged up in the wet and windy British Isles. He writes both adult and young adult LGBT fiction, with a particular fondness for writing about people and places that don't usually make it into romantic fiction: the council  estates, the mentally ill, the people solving problems with their fists, and finding love on the local Arriva bus route.

When not writing, Matthew is  usually asleep or crunching numbers at his day job. He can be found on Facebook and Twitter.