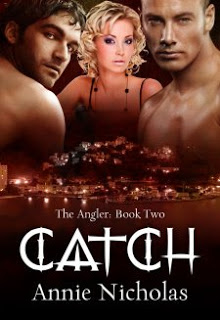 Enter to win and eBook of Catch!

Just comment on the post below and leave the first bit of your email address. You do need to be a NOR Newsletter / Fan Club subscriber to enter. USA Postage Only. Ends - 3/11/2011

Everyone feels jealousy from time to time. It’s a natural animalistic reaction we have that wants to cry out, “Mine!” Being jealous is not easy to deal with. We’ve all done crazy things because of it: Driving by someone’s house to see if their home, act possessively causing a fight, or get depressed and empty the freezer of all the ice cream.

When someone gets caught in a three way relationship jealousy happens, as my heroine and her two heros find out. Relationships are hard with just two people. Adding a third makes it seem impossible.

The momentum of Tane shoving me off his chest as Rurik came into the room sent me bouncing on the covers. I flinched, expecting pain to tear through me, yet nothing happened.


“I was healing her.” Tane sounded as if he’d been caught with his hand in the cookie jar. I had to admit it looked bad. He only wore track pants and I wore nothing except my birthday suit, but come on, it was Tane. We could barely stand each other and on top of it, he was gay.


Rurik slammed the tray of food he carried onto a nearby coffee table. The plate rattled and the drink slopped over the edge of the glass. “You had to wait until I left and sneak in here like a rat?” He crossed the room and shoved the Nosferatu against the wall.


Tane didn’t fight back. He allowed Rurik to push him. The Master of all vampires could turn my lover inside out if he wanted to, however he did not deflect Rurik’s fury. He diverted his gaze to the floor as if he couldn’t meet his friend’s glare. His head bounced off the wall as Rurik shoved him again with more homicidal force.


“How could you betray me like this?” Rurik shouted in Tane’s face. “It’s not enough you steal her bond, you need to seduce her as well?”

But jealousy is not the same thing as love. Sometimes people think feeling envious means they are loving their partner a lot or more. It’s really the fear or anger of losing out that is the root cause of this painful emotion. If jealousy is leading to power struggles in a relationship there is an underlying issue that needs to be addressed.

The moment we turned the corner toward our room, I swung around to face him. “Please, tell me you’re not angry.”


“For finding you in Tane’s arms again? I’m not furious but...” He shrugged and tried to get around me, yet didn’t put much effort into it since I stopped him with my hand.


“I had another nightmare of Luckard. Tane thought it best to shield my sleep in case that monster was trying to get into my head.”


“And I was unavailable to help you.” He stared over my head, not meeting my gaze. A muscle ticked along his clenched jaw. “Useless again.”


Wrapping my arms around his slim waist, I pulled us together. “You make me feel loved.”


“And he makes you feel safe.”


My head cranked back to look him in the eye. “What makes you say that?”


“I don’t need to read your mind. Your face is an open book. You didn’t hurry to me after waking as you would have a few days ago.”


“Comfortable.” He finished my sentence then touched my curls. “I love it when your hair gets crazy like this.”


A wellspring of doubt bubbled from my heart and it made me sad.

Excerpt from Catch The green eyed monster can be slain through compassion, communication, and caring. These are hard lessons to learn and understand. Witness it in Catch.

Caught between two vampires, Connie is torn between Rurik, the one she loves and Tane, the one she’d love to stake.

Hunger burns in Connie Bences’ soul--she craves the blood of her vampire lover, Rurik, but it’s not satisfying her needs anymore. It’s driving her insane. Desperate to find help, Rurik brings her to Rio De Janeiro, where Tane rules the vampire nation.

The back-stabbing vampire almost killed her and Rurik when they’d first met, then used them to obtain his crown. She would rather stake him, but the small drop of Nosferatu blood he’d forced her to drink in Budapest is blooming into a bond, one which ties her life to his. One he won’t hesitate to manipulate.

He admits to binding her so Rurik would have to remain at his side, but their timing couldn’t be any worse. The betrayer finds himself betrayed. Tane’s rule is in upheaval and he’s forced to place his trust in two people who owe him no allegiance--her and Rurik. In the middle of a power struggle, Connie fights to keep her lover, but didn’t plan on Tane slipping into her heart.

Are you jealous? - Jealousy Test: http://cl1.psychtests.com/take_test.php?idRegTest=2890