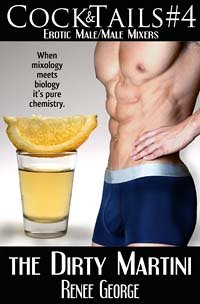 When bartender Chris Lawson goes into shock after getting the worst news of his life, he wakes up in the arms of Marty Lincoln, an Army Ranger on leave from his post. Even in his grief, Chris feels instantly connected to the war-ravaged vet.

Only two problems: Marty is his boss’s younger brother. And even if that wasn't an obstacle, the battle-hardened Ranger is straight. Or is he?

***This takes place in the CockTail serials world, but is a stand alone novella.

Driving up the highway, only a couple hours from his hometown, Chris allowed the surrealness of the situation to envelope him. Marty hadn’t said more than a few perfunctory words to him since they’d stopped at Chris’s apartment to pick up his things for the two-day trip, and he’d made a point of not making eye contact with Chris. The silence and distance lingered between them—a thick and heavy barrier. Did Marty already regret his decision to take Chris home? They barely knew each other. They weren’t friends, and one night didn’t make them lovers.

Chris pursed his lips, steeling his courage to give Marty an out. “About last night. It doesn’t have to mean anything. Just two people hanging out, hooking up. It’s not a big deal.” He snapped his mouth shut and swallowed hard. God, he sounded like a rambling imbecile. Marty’s white knuckles and seriously drawn brows indicated Chris was making things worse not better. “Look. One time doesn’t mean your gay or anything. I was sad. You were sad… or whatever. We helped each other. End of story. No reason to feel bad or guilty. It’s not like I’m going to be heartbroken if you don’t want me.”

Hearing his own words, the possible truth of them, hit Chris like a punch to the gut. “I hope that’s not why you’re taking me to my dad’s funeral. Because you feel guilty about what we did.”

The car slowed. Marty flipped the right blinker. He pulled them over to the side of the highway, put the car in park, and turned his head until his gaze fell on Chris.

Chris, who had some experience with the fight or flight reflex, was suddenly in flight mode. He should’ve kept his mouth shut! Marty looked like he was ready to beat the crap out him, and considering his ranger training, Chris had little chance against him.

When Marty undid his seatbelt and turned his body to face the passenger seat, Chris pressed his back against the door. Marty leaned over the console between them until his face hovered inches from Chris’s. Chris tucked his chin and closed his eyes, bracing for the punch.

His eyes fluttered open when he felt the unexpected warm press of Marty’s lips against his own. Not the punch he was expecting, but just as hard of a knockout. Marty’s eyes had softened at the edges, but he still looked angry when he pulled back.

“I’ve wanted to do that since I walked in on you having coffee with Jay this morning. Not kissing you before now has been the hardest part of my day.”

Stunned, Chris said nothing when Marty sat back in his seat, put his seatbelt on, and started the car. “Have I cleared up your confusion?”

Chris shook his head and smiled. “Not at all.”

Multi-published, award-winning author Renee George has been a factory worker, an army medic, a nurse, a website designer, a small press editor, an artist, and a teacher, but writing stories about sexy alpha men is the BEST job she's ever had. When she turned thirty, she went back to college and earned her BA in creative writing. She has been married to the love of her life, a wonderful man who supports in every way, for over half her life (and that is a VERY long time!). She happily lives in a small, Midwest town with her husband, two needy dogs and a very independent cat.