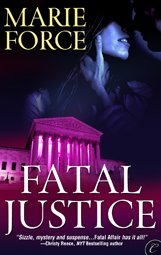 The Adventure Continues in the Second Fatal Book by Marie Force

Thank you so much for having me back for another visit to celebrate the launch of Fatal Justice, the second book in my new Fatal Series. I’m really excited to continue the story begun in my June 2010 release, Fatal Affair, where readers met Washington, D.C. homicide detective Sam Holland and her significant other Nick Cappuano, chief of staff to murdered U.S. Senator John O’Connor.

Fatal Justice opens with Sam and Nick entering a new phase in their professional and personal lives. Sam takes the oath of office as a police lieutenant on the same day Nick is sworn in a U.S. Senator, completing the last year in the term of his murdered friend and boss.

A police detective pared with a U.S. senator. To say that Sam and Nick encounter some conflict in their lives is putting it mildly! In Fatal Justice, readers will also see more of Sam’s adorably innocent partner, Detective Freddie Cruz. Freddie was so popular with readers of Fatal Affair that I thought it would be fun to share a preview of his story in Fatal Justice (warning, this excerpt is slightly PG-13…) 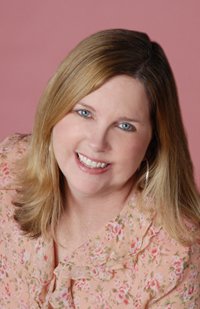 Detective Freddie Cruz paced the sidewalk in front of Total Fitness on Sixteenth Street. On this first day of the New Year, he was all about resolutions and none of them involved spending more time at the gym. No, this was the year he was finally going to get laid. No matter what it took, no matter what he had to do, no matter what personal ideals he had to sacrifice, he was going to have sex.

Raised a devout Christian by a single mother, he’d done his best for twenty-nine long years to make his mother proud by saving himself for marriage. But since he didn’t even have a girlfriend, let alone a potential wife, and with rampaging hormones making his life a living hell, he had decided to give in.

Nick’s aide Ginger had practically thrown herself at him at the party last night, but Freddie wasn’t interested in her.

Since he and Sam interviewed personal trainer Elin Svendsen during the O’Connor investigation, he found himself fantasizing about her day and night. The way she’d been so free about her sexuality and talked so openly about the kinky sex she’d had with the dead senator. She was all Freddie could think about. She was the one he wanted.

That was why he was lurking outside Total Fitness, wearing one of his trademark trench coats while trying to work up the nerve to step inside to inquire about personal training. She didn’t need to know he was interested in personal training of a different sort. At least not right away.

Startled, he looked up, and there she was. Tall, blonde—so blonde her eyebrows were almost white—she had dark blue eyes and a smile right out of a toothpaste commercial. Carrying a tray containing four coffees and wearing a light blue down vest and black yoga pants, it was all Freddie could do to keep from drooling. She was even sexier than he remembered—and he remembered every excruciating detail of the night he’d spent protecting her in a hotel room while Thomas O’Connor hunted down his father’s ex-girlfriends.

“Crazy today. It’s the busiest day of the year for us—all the resolutions.”

“Are you working on a case?”

“Me?” No, idiot, Freddie thought, that other guy she’s talking to. “Not today. I was just in the neighborhood and thinking about resolutions.”

He went hard as a stone and was thankful for the long coat.

“Do you want to come in? I could show you around and tell you about our program.”

“Um, sure, that sounds good.” He wondered if she’d think it strange if he kept his coat on inside.

Join Sam, Nick, Freddie, Skip, Celia, Gonzo and the rest of the Fatal crowd for the second book in this unfolding series. You can find Fatal Justice at http://ebooks.carinapress.com under the Romantic Suspense tab. Later this year watch for book 3, Fatal Consequences, followed by the Fatal Wedding Novella, Fatal Destiny. Then early next year, book 4, Fatal Flaw!

Question for readers: In Fatal Justice, Sam and Nick are in the throes of new love, yet life keeps getting in the way. Has that ever happened to you and your significant other? How did you handle the challenges? I’ll give a copy of Fatal Justice to one respondent. Thanks again for having me!

Marie is the author EVERYONE LOVES A HERO (Feb. 2011), LINE OF SCRIMMAGE (Sept. 2008) and LOVE AT FIRST FLIGHT (July 2009). Of LINE OF SCRIMMAGE, Booklist said, “With its humor and endearing characters, Force’s charming novel will appeal to a broad spectrum of readers, reaching far beyond sports fans.” Wild on Books said, “LOVE AT FIRST FLIGHT by Marie Force is most definitely a keeper. It is an astounding book. I loved every single word!” Marie is also the author of TRUE NORTH and THE FALL, available as ebooks via Amazon.com and Smashwords.

Since 1996, Marie has been the communications director for a national organization similar to RWA. She is a member of RWA’s New England, From the Heart and Published Author Special Interest Chapters.

While her husband was in the Navy, Marie lived in Spain, Maryland and Florida, and she is now settled in her home state of Rhode Island. She is the mother of Emily, 15, Jake, 12, and a feisty dog named Brandy.

Find her at www.mariesullivanforce.com, on her blog at http://mariesullivanforce.blogspot.com, where she runs the popular weekly Romance and Oreos Book Club, on Facebook at www.facebook.com/pages/Marie-Force/248130827909, and on Twitter at twitter.com/MarieForce. Marie loves to hear from readers. Contact her at marie@marieforce.com.