Friends, I am all about romantic getaways. However, I’m not married to the most romantic of men (but trust me, I love him anyway!). When we do getaway, most of the times it’s something pretty common like the beach, but I recently got into the idea of a themed getaway. And really, I blame Nora Roberts. I went and stayed at her B&B in Maryland and I was never the same. I didn’t realize stepping into a book (or books) was really a thing and now that I know it is, I find I enjoy our trips a little more.  So here are my Top Five Picks for Romantic Getaways for Romance Readers (try saying that ten times fast!)

This was really just the tip of the iceberg. Personally, when I think getaway, I’m thinking something quick. If we were talking vacations, well…I would have hit on places all over the world!! Either way, there’s plenty close to home here for you to choose from.

Happy Travels, my friends!! Be sure to bring a good book!!

Tangled Up in You - The Shaughnessy Brothers Book 7

One fateful night Bobby Hannigan sustains a gunshot wound that could end his career as a police officer. If that's taken from him, he doesn't know what he'll do. The only ray of hope is Teagan Shaughnessy—a kindhearted single mom who understands his struggles...

Teagan and her young son have just moved back to the Carolina coast to be near family. When she meets Bobby, the timing feels wrong, but everything else feels oh-so-right. Bobby and Teagan each had plans for their own futures. But they're finding that those plans are meaningless if they can't be together...

This giveaway is now over. The lucky winner is: Glenda

It was well after midnight and the house was completely dark. Teagan stared up at the ceiling and tried to will herself into calm. Her heart was racing, her stomach was roiling, and if she didn’t know any better, she’d swear she was having a panic attack.

Then the tears started.

Bobby was sound asleep beside her, and the last thing she wanted to do was have him wake up and hear her crying. She wiped furiously at her eyes, doing her best to stop the tears from falling, but she couldn’t. There were too many, falling too fast to stop any time soon.

Carefully, she rose from the bed, grabbed her robe from the hook on the bathroom door, and tiptoed out to the living room, closing the bedroom door behind her. She sank down on the couch, pulling her knees to her chest as she cried.

She felt like the world’s biggest fraud. She was an emotional wreck, and why? She’d just spent hours making love with an amazing man who’d both let her set the pace and somehow knew exactly what she needed. It had nothing to do with him—he was perfect. It was her.

Having the courage to take that step tonight was something Teagan hadn’t believed she’d ever have. But there was something about Bobby that made her want to be brave. And everything about these last hours had been wonderful. For all that she’d loved Logan and how special their relationship had been, they had been so young. No more than kids, really. The man in her bed right now was…well. He was more than she expected. He’d made her feel things she’d never felt before, and made her want to do things she’d never done before.

It was sexy and exciting and…terrifying. Yes, terrifying. As much as she didn’t want to think about how much experience Bobby had, or how much he’d dated, it was obvious that in the bedroom, he was way out of her league. She only hoped he wasn’t disappointed in her.

Lifting her head, she wiped her tears away and took several steadying breaths.

“If he wasn’t disappointed in you before, he certainly would be now,” she murmured.

Someone’s hand descended on her shoulder and she screamed.

Bobby walked around and sat down in front of her on the couch. It was dark, the moonlight was offering a mere sliver of illumination in the room, but she could see him and the concerned look on his face.

She went to speak but he placed a finger over her lips.

“I didn’t mean to eavesdrop. But when I woke up and you weren’t in bed, I came looking for you. I wasn’t expecting to find you out here crying.” She heard the pain in his voice and knew she had to put his mind at ease.

“You don’t have to tell me,” he quickly interrupted. “I was just wondering where you went. And when I opened the door, I heard you crying.”

He stroked one finger down her cheek. “I don’t know why you would think that I’m disappointed, but I’m not. Everything about tonight has been amazing. You’re amazing,” he clarified. “If anything, I was worried I had hurt you.”

She stared at him as if he were crazy. “Why would you think that?”

“What am I supposed to think when I find you out here in the dark?” he asked softly. “Teagan, I’m not stupid. We’ve talked enough. I know it’s been a long time for you since, well, you know.”

“And I know I was a little…aggressive.”

She smiled. “I kind of liked that. Actually, I liked it a lot,” she said shyly.

“Really. And I wasn’t crying because of anything you did. It was me. I got too deep into my own head and…tonight was just—it was—” She huffed with annoyance because she couldn’t seem to find the right words.

“I get it,” he said, saving her from having to scramble. “It’s the same for me.”

Now it was his turn to nod. “What we have? What we started here tonight? It’s like a new chapter for the both of us.”

Her shoulders sagged and she scrambled to climb into his lap to hug him. “That’s it exactly.” As he held her tight, she rested her head on his shoulder. “Can I ask you something?”

“Can we work on this chapter a little more tonight?” She was thankful for the darkness hiding her blush, because she couldn’t believe how bold she was being.

Carefully, he stood with her in his arms and walked back to the bedroom, kicking the door closed behind them as he passed. “We can work on this chapter over and over until we get it right,” he promised.

And in that moment, she fell a little in love with him. 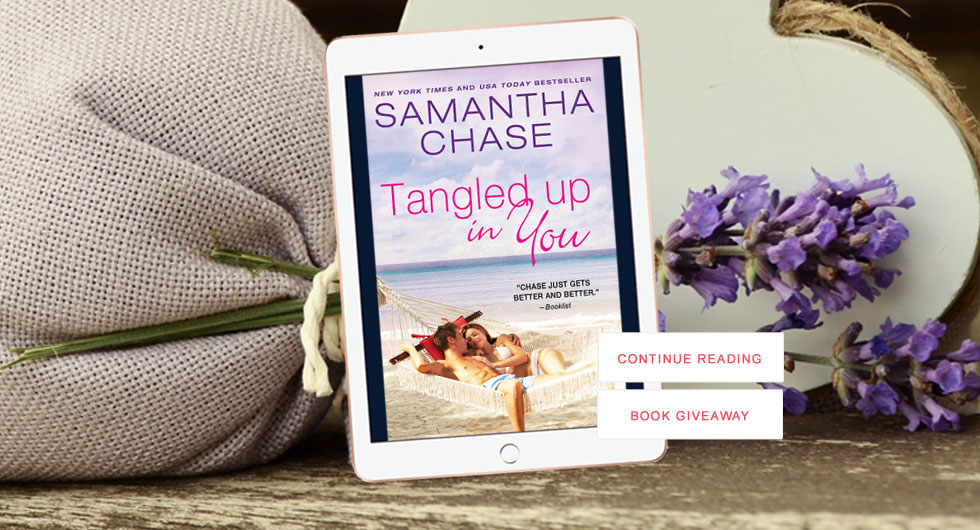